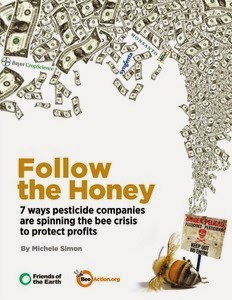 Without question the industry is in overdrive playing the denial game in exactly the same way as the tobacco industry.  The problem was obvious early.  By early I posted on this in 2007 when it became clear.  The situation has only worsened and slowly but surely bee keepers have been succumbing.  The problem is also not abating which it makes it pretty clear that a systemic non biological killer is at work.


As this protocol progresses, it will drive agriculture into organic methods in both self-defense and for sound economic reasons.


The industry itself will not abate this problem until we are faced with a real crop collapse.  In the meantime the bee keepers struggle to sustain their current industry against the worst crisis ever.


Worldwide bee deaths have now entered a crisis state threatening the global food supply and, according to a new report out Monday by Friends of the Earth, the human-made epidemic has been worsened by an industry-funded disinformation campaign.


The report, Follow the Honey: 7 ways pesticide companies are spinning the bee crisis to protect profits (pdf),details how the leading pesticide corporations—Bayer, Syngenta, and Monsanto—are taking a page from the playbook of Big Tobacco companies to stall any potential legislation from protecting bee colonies.


According to report author and noted food industry critic Michele Simon, these corporations are engaging in a full-throttled public relations blitz, which includes funding industry-friendly research, targeting children, attacking regulators, blaming farmers and "pretending to care" by creating their own greenwashed "save the bees" campaigns.


These efforts are meant to distract policy makers and the general population from identifying the cause of bee decline, which —according to "a strong and growing body of evidence" — is linked to a widely-used class of neurotoxic pesticides called neonicotinoids, or neonics.

Following a 2013 review by the European Food Safety Authority, the European Commission implemented a continent-wide two-year suspension of the three most-used neonics — imidacloprid, clothianidin and thiamethoxam.


U.S. efforts to enact similar legislation have floundered due to "sophisticated, multi-pronged public relation campaigns" by the leading chemical companies, intent on "manufactur[ing] doubt about their products’ contribution to the bee crisis," the report charges.

Neonics are used on more than 140 crop seeds and virtually all corn and a large percentage of soy, wheat and canola seeds planted in the U.S. are pretreated with neonics. According to the report, the pesticide makers would have much to lose if neonics were universally banned. In 2009, the neonicotinoid global market was worth roughly $2.6 billion.

"Bayer, Syngenta and Monsanto make billions from bee-killing pesticide products while masquerading as champions of bee health,” said Lisa Archer, food and technology program director at Friends of the Earth. Asking if industry profits are "more important than our food supply," Archer says that Congress must act now to ban these pesticides that threaten our food security.


"Bees are essential to one out of three bites of the food we eat, and two thirds of global food crops, from almonds to strawberries," the report states. "While industry attempts at spin, distraction, and the manufacture of doubt may be effective political tools in the U.S. for causing delay and inaction, they will only cause more harm in the long run."