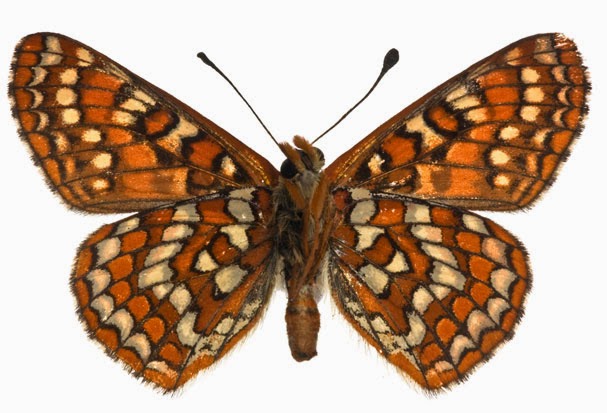 \The take home is that an insect species can decide as a species to alter its preferences.  This looks like the group mind at work again and the posited ability to directly adjust almost instantly to a new biome choice and to obviously make appropriate adjustments.  I personally have gone from having a tentative conjecture several years ago to having my nose rubbed in it here.

The bottom line is that evolution is a considered choice handed down to the next generation.  Who would have suspected that life operates directly by intelligent design without a bye your leave oh Supreme Being.  Now I do know where those prenatal camel calluses come from.

This is also wonderful news in terms of prospective species extinction.  They merely need a chance to figure it out and to be resetabloshed.

A butterfly species whose population collapsed because of climate change and habitat loss has defied predictions of extinction to rapidly move to cooler climes and change its food plant.
Apr 11, 2014

The quino checkerspot (Euphydryas editha quino), found in Mexico and California, has shifted to higher altitudes and surprisingly chosen a completely different species of plant on which to lay its eggs, according to research presented at the Butterfly Conservation's seventh international symposium in Southampton.

Its rapid adaption offers hope that other insects and species may be able to adapt unexpectedly quickly to climate change.

"Every butterfly biologist who knew anything about the quino in the mid-1990s thought it would be extinct by now, including me," said Prof Camille Parmesan of the Marine Sciences Institute at Plymouth University.

The Quino was once abundant in southern California but the expansion of Los Angeles and San Diego saw it reduced to just two small colonies. Other populations in Mexico began declining sharply as global warming made conditions too hot and dry for its caterpillars' food plant, a species of plantain.

Six years ago, Parmesan suggested that the endangered quino could be a prime candidate for "assisted colonisation" – to be moved by humans to cooler, unspoilt habitat north of Los Angeles. Instead, to the amazement of scientists, the butterfly did not need human help and reappeared on higher ground to the east, where its caterpillars are feeding on a flowering plant it has never eaten before.

Several other butterfly species have been changing habitat or diet to cope with a changing climate but the quino checkerspot is the first butterfly known to science to change both so rapidly.

Many environmentalists fear that climate change is happening too quickly for species to adapt but, according to Parmesan, this surprising example shows that some apparently doomed species may be more resilient than we imagine.

However, she warned that this case showed that nature reserves, and linking together unspoilt habitat, was more important than ever to enable species to survive a changing climate. Without undeveloped land to the east of Los Angeles and San Diego, the quino checkerspot would have had nowhere to go and would have become extinct.

"We have to give these species the space to adapt," said Parmesan. "In the early days of climate change people worried that nature reserves would be no longer useful because the species they protected would move out. Now we know that new species move in, and so they are more important than ever."

More than a quarter of Britain's 59 species are moving north, with butterflies such as the comma moving around 10km each year. With climate change, another UK species, the brown argus, has started to feed on wild geranium plants as a caterpillar, enabling it to spread rapidly through the Midlands and into northern England.

But the international symposium also heard strong scientific evidence that climate change will create more losers than winners because unspoilt habitat is so fragmented, preventing many butterflies, moths and other insects from moving to more suitable places. Tom Oliver of the Centre for Hydrology and Ecology told the symposium that scientific modelling predicted a number of UK butterfly extinctions by the middle of this century.

This article was shared by our content partner the Guardian.environmentalresearchweb is now a member of the Guardian Environment Network.
About the author
Patrick Barkham is a natural history writer for the Guardian and former feature writer.

Ah, to be as free as a butterfly.