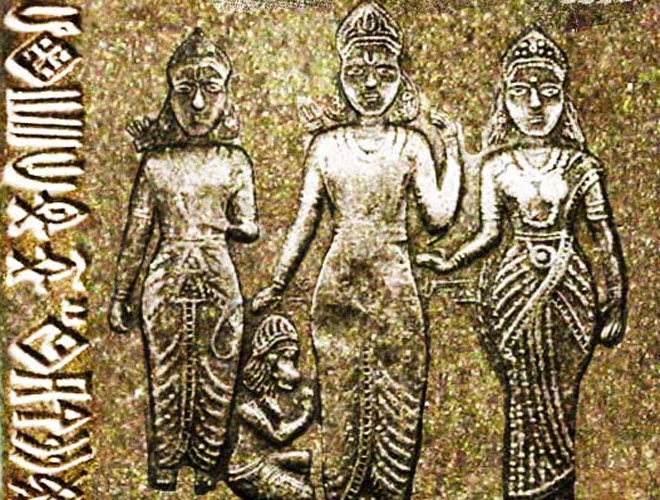 This is excellent news.  It polices up the historical framework of India rather well.  What is pleasantly surprising is that language itself remained largely intact throughout as has the Chinese language.  Thus information does pass through rather well.

What is clearly emerging is a post Pleistocene Nonconformity India that sustained a civilization almost immediately and quickly grew populous.  This is reasonable as it was not necessary to invent new plant foods such as wheat.

Again the impetus of the Atlantean Bronze Age and high quality bronze triggered a robust global building culture that in India was built easily on top of the well-established older civilization.  This is what we have the most evidence of and it certainly led to a culture of record keeping in particular.

I want to make a couple of implied conjectures.

1                    Symbolic writing as such appeared in order to record treaties and commercial information and laws.  It made good sense for a ruler to create his private system in order to preserve secrecy.  Thus we have exactly that.  A common system is the artifact of an imperial civilization such as the Chinese after say five hundred BC.
2                    A system able to properly record narratives arose properly around 1000 BC with the advent of the Greek alphabet.  This opened up the actual utility of written language to what we now expect.  I find it noteworthy that Homer is properly understood as a Bardic creation.

Thus looking for much more before the end of the Atlantean Epoch ending in 1159BC is a challenge.  Again the Global Atlantean Epoch  drew on the various antique high cultures nestled in the various deltas worldwide to provide initial markets and a stepping stone for a rapidly expanding agriculture.

There is a huge amount of substance in the Vedic sources that need to be rigorously validated.  Most of the apparently unbelievable conforms nicely to my own efforts and support my conjectures.

A common view among linguists is that there should be a standard Indus Valley script.

In a startling development Mahesh Keshavam, Gangadhar Yadav and Akbar Patel have announced that they've deciphered the Indus Valley script. Their task was made simple by the discovery of an Indian equivalent of the Rosetta Stone. For those who don't know, the Rosetta Stone, an ancient Pharaonic-Egypt decree discovered in the 18th century, helped decipher the ancient Egyptian script.

The Indian equivalent of the Rosetta Stone, called the Naga Stone by the trio who discovered it, has a message from a king who lived many millennia ago, inscribed in three different scripts. One of these is the ancient Brahmi script, which as we all know, has been deciphered already.

"We discovered the Naga Stone in Nagaland, and hence the name, explained Mahesh. "It appears to be a message from a local ruler, prescribing that a certain festival celebration be followed strictly. It has the same message in three different scripts, one of which is Brahmi, which we can read. Since the message is the same across the other scripts, it was a simple job of matching words to decipher the other scripts.

Interestingly, all three scripts including Brahmi can be identified as Indus Valley scripts since they contain symbols commonly found in Indus Valley seals. The Indus script (which is a hieroglyphic script, like that of Mandarin) has largely been found to be inscribed on small seals that were probably used for trade and, some say, for inspirational quotes as well.

Akbar said, "What we have discovered is that there was not one uniform Indus Valley script. There were many, each differing from the other quite a degree, even if some of the symbols were similar. In fact, one of the scripts is even written right to left! [ ouch!  This also suggests the same for any Atlantean script as well – arclein ]

It is a common view among linguistic experts that there should be one standard Indus Valley script. It seemed logical as everything within the Indus Valley civilisation seemed to be rigidly standardised, from the dimensions of the bricks used in construction to the broad layouts for cities. It appears that the linguistic experts were wrong. Different regions did use different scripts. But was the language common?

"Yes, the language was common even though the scripts were different, said Mahesh. "And the language was Sanskrit. At the look of surprise on my face, Gangadhar stepped in. "You know, explained Gangadhar, "the practice of using the Devanagiri script for the Sanskrit language is a relatively recent phenomenon. In ancient times, many other scripts were used, including the Brahmi script. In fact, ancient manuscripts have been found in Kerala wherein Sanskrit had been written in the Malayalam script. So the idea of using different scripts for the same language is not new in India. Of course, originally, Sanskrit had no native script and was primarily an oral language.

But this obviously raises questions about the version of history taught to us. We are taught that the Indus Valley people were Dravidians who were indigenous Indians. They were, apparently, overrun by Sanskrit-speaking Aryan invaders and pushed to the south. So how can the script of a defeated people be used for the language of the victors?

"If you read the message on the Naga Stone itself, said Akbar, "your doubts will be cleared. There was no so-called Aryan invasion. Unbiased historians have always marvelled at this strange dichotomy in ancient Indian history-the Indus Valley civilisation, the largest, most urban and richest civilisation of its time, purportedly left behind no literature or markers of high culture; whereas the so-called Aryan invaders from Central Asia, who didn't build any great cities and were apparently barbaric warriors, left behind the largest body of literature when compared to any other people of the ancient world. The only logical explanation is that the Indus Valley civilisation and the Vedic-erroneously called Aryan-civilisation were one and the same.

"In India, the study of history is unfortunately heavily politicised, with left- and right-wing ideologues making arguments based on their ideological positions rather than facts, said Gangadhar. "They both, sadly, allow their ideological leanings to cloud their thinking. Therefore, today, we have to turn to Westerners or non-professional Indian historians who are still untouched by the politics that plagues our history departments, to find unbiased interpretations of our history which are based on facts. Most Western historians have already junked the Aryan Invasion Theory as colonial-era, European myth-making.

But the convincing proof is the Naga Stone itself. The message written on it is unambiguous. The local ruler of that time, Vasuki, said that the ancient Naga celebration of Panchami must be followed since it had come down to his people (whom he called Vedic people) from an ancient 10,000-year-old tradition from Sangam and Dwarka. Since the stone itself is at least 3,000 years old, it makes the 'mother cultures' of Sangam and Dwarka more than 13,000 years old, that is, before the end of the last great ice age.

But where were Sangam and Dwarka? "We believe that Sangam refers to an ancient Tamil civilisation and Dwarka to an ancient Gujarati one,  said Akbar. "It would seem that the British writer, Graham Hancock, was right. He had postulated that there were many ancient civilisations spread across the world before the end of the last great ice age, when the sea levels were a lot lower. Two of those civilisations were based in India -one off the coast of modern Tamil Nadu and another off the coast of modern Gujarat. These civilisations were destroyed when the ice age ended and the sea levels rose. The survivors escaped to the north and established what we call the Vedic civilisation. So, according to Graham Hancock, the ancient Vedic civilisation descended from an even more ancient Tamil and Gujarati civilisation. The Naga Stone has just confirmed this theory.  Clearly, our history books need some rewriting!

- Amish Tripathi is the author of The Shiva Trilogy