A Modern Pope gets Old School on the Devil 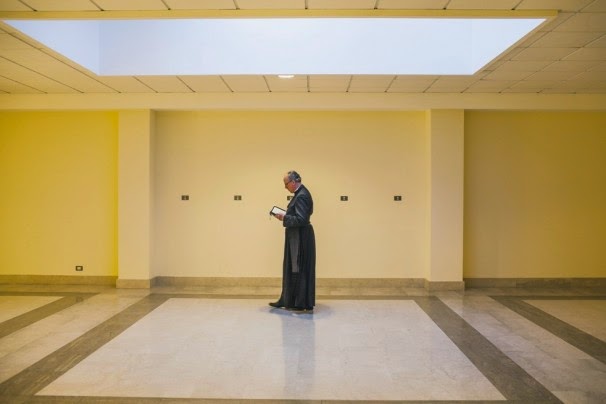 The modern world has had a serious problem confronting the afterlife at all as part of a rational worldview.  A large part of that derives from almost antique notions that have themselves not been properly recast.

The fundamental problem for everyone is that we have first personified GOD and this naturally leads to personifying SATAN.  It is better to understand both as separate magnets to attract human intentions first of the physical mind and through that to modify the spirit.  I think that we can all agree that it is possible to be attracted to behavior and ideas that can be characterized as either good or evil.  It is through the exercise of free will that we choose to cleave to one or the other however we might individually rationalize our behavior.

None of this solves the real problem which is how to handle spirits which are all departed from physical existence but still for various reasons hang around.  In practice, it appears that the majority do remain engaged with the physical but positively.  That of course has its own dangers.  It allows those spirits engaged in ill intent ample scope to meddle and cause damage.  What can be said is that we are surrounded with spirits that are good, bad and indifferent, but not much better informed than they were in life.

We ourselves are coming to a vastly deeper understanding of the nature of spirit and soul and ultimately of GOD.  What can be said is that spirit and partly soul can be personified as derived from a formerly living human being.  Soul is thought to be the incorruptible part of our existence that the spirit cannot touch or alter.  At least this is all beginning to become rigorous.

The rediscovery of evil spirits is one thing and not so much use by itself.  Their removal from a victim has proven value which is why we suddenly see a blossoming of demand.  There is obviously something to remove and deal with and it is typically scary.  Ayahuasca therapy is also a powerful tool for isolating and neutralizing evil spirits and also clearly visualizing them.  Thus this simple enough idea is a powerful method for tackling intractable mental health issues.

In the meantime the Pope is embracing this movement and reminding us all that a belief in the afterlife is hardly improved by arguing either souls or spirits do not exist when it is patently clear that one implies the other and the last time I checked, this is about religion.  Thus accepting Godhood implies the individual spirit and the purity of the soul and thus we open the question of the geography of the afterlife of which a great deal of revelation is available.

In the meantime the fervently secular crowd obviously does not know what to make of any of this.

A modern pope gets old school on the Devil

By Anthony Faiola, Published: May 10

VATICAN CITY — A darling of liberal Catholics and an advocate of inclusion and forgiveness, Pope Francis is hardly known for fire and brimstone.

Yet, in his words and deeds, the new pope is locked in an epic battle with the oldest enemy of God and creation:

The Devil.
After his little more than a year atop the Throne of St. Peter, Francis’s teachings on Satan are already regarded as the most old school of any pope since at least Paul VI, whose papacy in the 1960s and 1970s fully embraced the notion of hellish forces plotting to deliver mankind unto damnation.

Largely under the radar, theologians and Vatican insiders say, Francis has not only dwelled far more on Satan in sermons and speeches than his recent predecessors have, but also sought to rekindle the Devil’s image as a supernatural entity with the forces­ of evil at his beck and call.

Last year, for instance, Francis laid hands on a man in a wheelchair who claimed to be possessed by demons, in what many saw as an impromptu act of cleansing. A few months later, he praised a group long viewed by some as the crazy uncles of the Roman Catholic Church — the International Association of Exorcists — for “helping people who suffer and are in need of liberation.”

“ ‘But Father, how old-fashioned you are to speak about the Devil in the 21st century,’ ” Francis, quoting those who have noted his frequent mentions of the Devil, said last month while presiding over Mass at the Vatican’s chapel in St. Martha’s House. He warned those gathered on that chilly morning to be vigilant and not be fooled by the hidden face of Satan in the modern world. “Look out because the Devil is present,” he said.

Since its foundation, the church has taught the existence of the Devil. But in recent decades, progressive priests and bishops, particularly in the United States and Western Europe, have tended to couch Satan in more allegorical terms. Evil became less the wicked plan of the master of hell than the nasty byproduct of humanity’s free will. Even Pope Emeritus Benedict XVI, a lofty German theologian, often painted evil with a broad brush.

Enter the plain-talking first pope from Latin America, where mystical views of Satan still hold sway in broad areas of the region. During his time as cardinal of Buenos Aires before rising to the papacy, Francis was known for stark warnings against “the tempter” and “the father of lies.” Now, his focus on the Devil is raising eyebrows even within the normally unquestioning walls of Vatican City.

“Pope Francis never stops talking about the Devil; it’s constant,” said one senior bishop in Vatican City who spoke on the condition of anonymity in order to speak freely. “Had Pope Benedict done this, the media would have clobbered him.”

Yet, as with so many of his actions, Francis may simply be correctly reading the winds of the Catholic Church.

Rising demand for exorcists
Although it is difficult to measure, Vatican officials talk about a resurgence of mystical rites in the church, including exorcism — or the alleged act of evicting demons from a living host. Cardinals in Milan; Turin, Italy; and Madrid, for instance, recently moved to expand the number of exorcists in their dioceses to cope with what they have categorized as surging demand.

But by focusing on old-school interpretations of the Devil, some progressive theologians complain, the pope is undermining his reputation as a leader who in so many other ways appears to be more in step with modern society than his predecessor.

“He is opening the door to superstition,” said Vito Mancuso, a Catholic theologian and writer.

Among the things lurking behind that door is the alleged gateway to hell guarded by the small cluster of officially anointed exorcists of the Roman Catholic Church.

By most accounts, the ranks of official exorcists number between 500 and 600 in a global church of more than 1 billion Catholics, with the vast majority operating in Latin America and Eastern Europe. This week, at the ninth and largest Vatican-sanctioned convention on exorcism, attendees gushed about the fresh recognition being afforded the field.

Almost 200 delegates — most of them priests and nuns — from more than two dozen nations talked about how Satanic cults are spreading like wildfire in the age of the Internet.

The new pope, exorcists say, has become their champion in the face of modern skeptics, many of them within the Catholic faith. Officially, those claiming to be possessed must first undergo psychiatric evaluations. But exorcists say that liberal Catholic bishops have often rejected their services even after such due diligence.

“The sad truth is that there are many bishops and priests in our church who do not really believe in the Devil,” said the Rev. Gabriele Amorth, the 89-year-old priest who is perhaps the closest thing the church has to a Hollywood-style exorcist. “I believe Pope Francis is speaking to them. Because when you don’t believe, the Devil wins.”

During the conference, the Rev. Cesar Truqui, an exorcist based in Switzerland, recounted one experience he had aboard a Swissair flight. “Two lesbians,” he said, had sat behind him on the plane. Soon afterward, he said, he felt Satan’s presence. As he silently sought to repel the evil spirit through prayer, one of the women, he said, began growling demonically and threw chocolates at his head.

Asked how he knew the woman was possessed, he said that “once you hear a Satanic growl, you never forget it. It’s like smelling Margherita pizza for the first time. It’s something you never forget.”

From his small room in a south Rome rectory fitted with a hospital bed, Amorth praised Francis for so fully embracing the biblical notion of the Devil as the personified overlord of hell.

Unlike in the movies, he said, the process of driving demons out typically takes multiple sessions over many years.

An exorcist in action
In a rare glimpse of an official exorcism last week, in a white-tiled room outfitted with images of Jesus Christ and the Virgin Mary, Amorth wrapped his purple sash around a Neapolitan housewife in her 40s who said she was afflicted by multiple demons. He then began chanting in Latin, commanding the devils inside her to reveal themselves.

“Tell me your name!” he demanded.

“No, no,” hissed the woman, shaking her head and speaking in an altered voice as her eyes rolled to the back of her head. “I will not!”

“Tell me your name!” he kept repeating, until finally she spat out, “Asmodeus,” the name of an ancient demon and hellish spokesman.

“How many are you?” he yelled, repeating the question as she grunted and shook her head violently.

Finally, she defiantly said, “We are five!”

After his bout with the demons, the diminutive Amorth simply shrugged.

Following the session, the woman and her husband, who gave their names only as Antonella and Michele, said they had been going through a living hell for years. They had begged bishops to authorize an exorcism when Antonella began having uncontrollable fits after receiving Holy Communion and became violent around religious prayers. But they were repeatedly denied.

It was only after they were referred to Amorth and began sessions four years ago, Antonella said, that her condition finally began to improve.

“The Devil exists, and thanks to this treatment, I have gotten back my faith,” she said. “I think Pope Francis is telling us it’s okay to believe.”