They Were Soldiers with Ann Jones 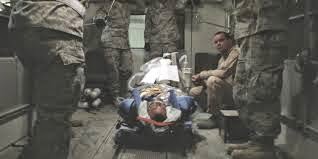 This is a story that badly needs to be told.  Few escape heavy combat unscathed.  Thus Ann does us a serious service here in reporting closely how these suddenly broken men are cared for and the attempts to make ir right for therm.

It was not always so.  In other wars few survived real contact with weaponry and a good measure of the dead was simply to count up the injured.  There were always as many dead and the injured were usually the survivable type in their medical world.

Flak suits have changed all that.  The targets today are the extremities.  It is also better tactics.  One injured soldier instantly commandeers four others in an effort to save his life.    Worse, we are still losing soldiers but we are receiving at least four times as many casualties as seriously injured.

The degree of damage is also often so serious as to preclude a serious working life afterward.  It needs to also be noted that most injuries in Afghanistan come from stepping on mines.  That means that you lose your limbs and likely your sexual organs as well.  In fact that is the rule rather than the exception.

The book is a grim read but you will know what the modern price of such war is.

These wars against so called Islamic insurgences can be won but not this way.

How the Wounded Return from America's Wars—The Untold Story
BY ANN JONES
http://www.haymarketbooks.org/pb/They-Were-Soldiers

Ann Jones shines a much-needed light on the dead, wounded, mutilated, brain-damaged, drug-addicted, suicidal, homicidal casualties of our distant wars, taking us on a stunning journey from the devastating moment an American soldier is first wounded in rural Afghanistan to the return home. Beautifully written by an empathetic and critical reporter who knows the price of war.

About the author
Ann Jones is a journalist, photographer (Getty Images), and the author of eight books of nonfiction, including Women Who Kill,Next Time She’ll Be Dead, Kabul in Winter, and War Is Not Over When It’s Over. She has reported on the impact of war in the Middle East, Asia, and Africa, and embedded with American forces in Afghanistan. She regularly writes for The Nation andTomDispatch.com.

Reviews
“Read this unsparing, scathingly direct, and gut-wrenching account — the war Washington doesn’t want you to see. Then see if you still believe that Americans ‘support the troops.’”
—Andrew J. Bacevich, author of Breach of Trust: How Americans Failed Their Soldiers and Their Country

“An indispensable book about America’s current wars and the multiple ways they continue to wound not only the soldiers but their families and indeed the country itself. Jones writes with passion and clarity about the tragedies other reporters avoid and evade.”
—Marilyn Young, author of The Vietnam Wars, 1945–1990
"For a decade, Jones, through her firsthand reporting of war and life on the ground in Afghanistan, has given us more of the reality of that conflict than any dozen of her well-connected colleagues in the established media, attuned as they have been to the cant and spin pouring out of official mouths. Now, she has turned her shrewd, wise, compassionate, reality-bound eye to some of the bitterest facts of all: the almost unimaginable suffering of the American soldiers wounded and otherwise impaired in the conflict. The result is a harrowing and compelling tale that is hard to bear but must be borne if we are understand the disaster this country unleashed in Afghanistan." —Jonathan Schell author of The Unconquerable World
“This is a painful odyssey. Ann Jones’s superb writing makes it possible to take it in without sugar coating.… Read this book. You will be a wiser and better citizen.” —Jonathan Shay, MD, PhD, author of Odysseus in America: Combat Trauma and the Trials of Homecoming


"Ann Jones' new book, They Were Soldiers: How the Wounded Return from America's Wars -- The Untold Story, is devastating, and almost incomprehensibly so when one considers that virtually all of the death and destruction in U.S. wars is on the other side. Statistically, what happens to U.S. troops is almost nothing. In human terms, it's overwhelming. Know a young person considering joining the military? Give them this book. Know a person not working to end war? Give them this book." —David Swanson, www.warisacrime.org
Posted by arclein at 12:00 AM