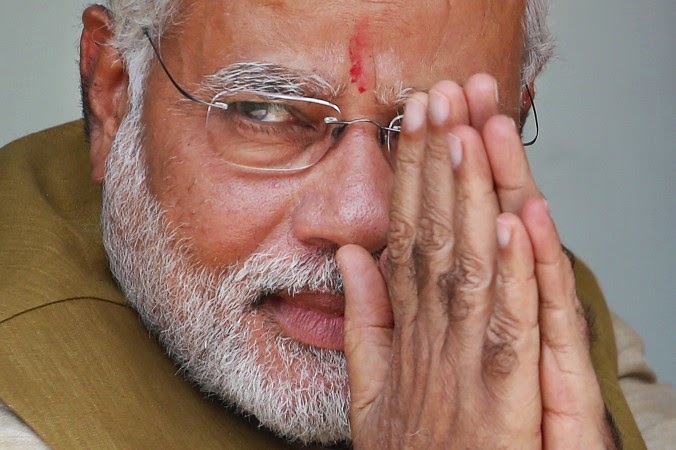 On the other hand, he may be just the medicine that India needs.  He governs with a strong hand because one must in order to overcome the culture of corruption that stifles change in India.  Roads are not improved even when the money is spent.  It is all stolen instead.  When governments can build roads, the rest naturally follows.

Fear mongering is silly today.  Performance will shape his policies and outcomes will give him reelection. In the meantime the congress party has a well-earned holiday and gets to clean house.

What is really happening is that the Indian political system is wonderfully maturing to produce a superior political system that will sort out the wheat from the chaff however long it may take.  Goods people are rising through this system and reading about the personalities makes good press.

Why India’s New PM May Bring Disaster to India

Opposition Bharatiya Janata Party (BJP) leader and India's next prime minister Narendra Modi greets the gathering at the home of his 90-year-old mother in Gandhinagar, in the western Indian state of Gujarat, Friday, May 16, 2014. (AP Photo/Saurabh Das)

Narendra Modi and his party, the BJP, have won the Indian election by a unexpectedly massive margin – securing an outright majority. Congress and outgoing Prime Minister Manmohan Singh have conceded defeat and congratulated Modi.

Given than the elections have been declared “free and fair”, does this apparent magnitude of popular support for Modi not suggest that the fears of people like me, who recently signed a letter expressing concern at this prospect, are unjustified?

Modi appears to have been democratically elected. But, as his record in Gujarat indicates, he has exhibited a propensity to wield power in an undemocratic way and for undemocratic ends. Within his own party, he prevents emergence of independent leadership, making sure that potential rivals are politically finished. He encourages defections from other parties, rewarding defectors with party tickets, undermining the legitimacy of opposition.

He undermines key constitutional bodies: whether agencies investigating the 2002 massacres or extra-judicial killings in Gujarat, or the Election Commission. He centralises power, once holding 14 portfolios in the state cabinet. He talks of “uprooting” opponents and “erasing” opposing political parties, and his supporters promise exile and incarceration to critics.

The cult of personality around him likens him to Hindu gods: this militates against the principle of political equality at the basis of democracy. He does not open himself to any critical questioning, about the “Gujarat model” or about the massive finances spent by his campaign. Gujarat, which he holds up as a model of “good governance”, has the highest levels of violence against those seeking to use the “right to information” to find out about the activities of his government.

Despite claims that Gujarat’s Muslims are economically well-off and that there has been no major anti-Muslim conflagration there since 2002, opinion polls suggest that 80 to 90% of minorities – Muslims but also Christians and Sikhs – have voted against Modi. His actions against religious conversion and his militant opposition to Christian missionaries have caused him visa troubles in Europe and the US, who see him as a threat to religious freedoms.

He “softened” his image since 2009 after the BJP lost badly in the general elections and it was felt within the BJP that this was because they were too closely identified with 2002 and the Hindu far right. After this point, Modi converted from Hindu warrior to “development” messiah. But recall that he was the head of the BJP in Surat when riots, with large-scale use of rapes, broke out there in 1992. As chief minister, he handed over control of events in 2002 to the far-right associates of the Vishwa Hindu Parishad and the Bajrang Dal. He never once visited victims of the riots.

Modi’s speechs now talk of “India First”, but until recently they were peppered with taunts towards Muslims, notoriously: “Hum paanch, hamaare pachees” (We are five and we have 25 children – implying that Muslims plan to secretly create a Muslim majority in India, a staple of the Hindu far right).

Modi did not spend central funds for scholarships for poor Muslim youth. Not one Muslim contested elections on his party’s ticket for the state legislature, despite being 10 to 15% of the population.

In Gujarat today Muslims cannot buy or rent property in Hindu majority areas. Recently, Modi’s ex-associates in the Hindu far-right have called for forced eviction of Muslims from such neighbourhoods. Influential party operators have threatened to send his critics “to Pakistan”.

To polarise Hindus for Modi, his right-hand man Amit Shah advised supporters to use the vote as a “revenge” against Muslims and the parties they support, and described Muslim-populated areas as “dens of terrorists”.

Shah gave seats to those accused in the communal violence that broke out in UP before the elections. Modi never contradicted the anti-minority voices in his party. Indeed, in his speeches he often equated Hinduism with nationalism and Islam with terrorism and illegal migration. His ultimate dog whistle to his supporters was that, while he openly wore the headgear of every community in the country, he publicly refused the Muslim skull cap.

Why be concerned about women’s rights when Modi has had the strong support of women in his state? Well, what he says on women’s issues is puzzling. Modi told the Wall Street Journal in 2012 that high malnutrition among Gujarat’s girls was because they were “figure-conscious”.

He made political capital from the high levels of violence against women in Delhi. But video-recording of gang rapes and the circulation of the videos marked both the 1992 and 2002 riots in Gujarat when he held office. Maya Kodnani, now in prison for overseeing the evisceration of 96 people, including pregnant women, was his minister of women and children’s welfare: what murderous irony! His close associate, Babu Bajrangi of the Hindu far-right Bajrang Dal, admits impunity in “rescuing (kidnapping) Hindu girls in love with Muslim men and forcing them to renounce their romance under duress. That both figures are in jail is despite Modi’s efforts to protect them. His commitment to patriarchy are evident both in his abandonment of his wife without, as far as we know, any maintenance or other rights, and in the use of state intelligence agencies for surveillance of a young women on the behest of her father.

The number of seats the BJP itself gets, and Modi’s incentives and ability to manage the far-right of his political base, will be key in determining how far these agendas will be pursued. That along with the vigilance and opposition of those who find their rights, lives and livelihoods under threat.

Subir Sinha studied History at the University of Delhi (BA) and Political Science at Northwestern University (MS, PhD), and has taught at Northwestern University and the University of Vermont. His research interests are institutional change, sustainable development, social movements, state-society relations in development, and South Asian politics, with a current focus on decentralised development in India, early postcolonial planning, and on the global fishworkers’ movement. He does not work for, consult to, own shares in or receive funding from any company or organisation that would benefit from this article, and has no relevant affiliations. This article was originally published on The Conversation. Read the original article.