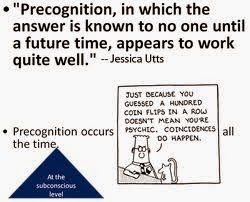 We also learn something important here.  It is that the information flows through our lower brain allowing reaction ahead of an actual awareness at the frontal cognitive level.  This allows threat recognition and reaction ahead of any actual manifestation.  It is a wonderful talent for the wilderness and certainly explains many levels of hunting prowess.

It also conforms well to reports I have entertained over the years and I think that we can simply accept the reality of the phenomena and ensure that when necessary that we put our minds into an appropriate receptive state.

This also tells us pretty clearly that it will not arrive on demand either which is disappointing.

Do Humans Have the Ability to Sense the Future? This Survey of Experiments So Far Says....Yes!

Can we sense the future before it happens? That question was at the heart of a set of nine experiments that sparked widespread controversy and debate when Professor Daryl Bem published his results in the Journal of Personality and Social Psychology in 2011. The reason: Bem's results were positive, suggesting that we can in some way do the seemingly impossible, and somehow 'know' (precognition) or 'feel' (presentiment) things before they even occur. The controversy grew even further, however, with widespread coverage in science media outlets of attempted replications from others that failed to find the same astonishing results. A number of scientists and 'skeptics' poured scorn on Bem's experiments, and prominent skeptic James Randi was even moved to award his infamous 'Pigasus Award' to Bem "for his shoddy research that has been discredited on many accounts by prominent critics".

[ I grow weary of this form of gratuitous slanderous labeling by so called sceptics whose only contribution to the debate is to throw insults. – arclein ]

In a previous post I pointed out that this focus on replications with negative results had glossed over the fact that there had also been a number of positive replications, suggesting that there might just be something to Bem's original results. And now, a meta-analysis of 90 experiments which replicated Bem's research, performed in 33 different laboratories (in 14 different countries and involving 12,406 participants), has offered significant support for the theory that humans can indeed sense the future:

The primary question addressed by the meta-analysis is whether the database provides overall evidence for the anomalous anticipation of random future events... the answer is yes: The overall effect size (Hedges’ g) is 0.09, combined z = 6.33, p = 1.2 × 10-10. The Bayesian BF value is 1.2 × 109, greatly exceeding the criterion value of 100 that is considered to constitute “decisive evidence” for the experimental hypothesis.

A subsidiary question is whether independent investigators can successfully replicate Bem’s (2011) original experiments...the answer is again yes: When Bem’s experiments are excluded, the effect size for the replications is 0.07, combined z = 4.25, p = 1.1 × 10-5, and the BF value is 757, which again greatly exceeds the criterion value of 100 for “decisive evidence.”

The meta-analysis paper, co-authored by Daryl Bem, Patrizio E. Tressoldi, Thomas Rabeyron and Michael Duggan, began with a search for all potential replications of Bem's method between the year 2000 and September of 2013. The experiments were then categorized according to the type of effect tested for, the number of participants involved, the statistical techniques needed to measure the effect, whether the study was published through peer-review, and the type of replication (exact, modified, or independently-designed). They found that 51 of the 90 experiments (56.6%) had been published in peer-reviewed journals or conference proceedings.

But could the positive results have been an outcome of the 'file drawer effect', where mostly positive results were published but negative replications were not - put in the file drawer, so to speak, due to no interesting findings? The authors of the paper did the math, and found that the number of 'missing' experiments needed to reduce the overall effect size to a trivial value was (conservatively) 520. This seems unlikely.

Another possible criticism addressed by the authors is the effect size. While the meta-analysis offered highly significant results, statistically, the actual 'precognitive' effect was very small. But, the authors note, "even very small effects can have both theoretical importance and practical utility":

One frequently cited example is the medical study that sought to determine whether a daily dose of aspirin can prevent heart attacks. The study was discontinued after six years because it was already clear that the aspirin treatment was effective (p < .00001), and it was considered unethical to keep the control group on placebo medication. Even though the study was considered a major medical breakthrough, the size of the aspirin effect is actually quite small (d ≈.07), about one third the size of the presentiment experiments and Bem’s (2011) original experiments and about one half the size of the exact replications in our database.

Skeptics also often raise the lack of an explanatory theory as a problem when it comes to psi results. The authors of the meta-analysis argue, however, "that this is still not a legitimate rationale for rejecting all proffered evidence a priori. Historically, the discovery and scientific exploration of most phenomena have preceded explanatory theories, often by decades or even centuries (e.g., the analgesic effect of aspirin; the antidepressant effect of electroconvulsive therapy; and Maxwell’s field equations of electricity and magnetism, which were formulated centuries after the phenomena were first explored)".

The meta-analysis also revealed possible refinements for future testing. 'Fast-thinking experiments', where the speed of the test reduced conscious cognition, produced more positive results than 'slow-thinking experiments': "every fast-thinking protocol individually achieved a statistically significant effect, with an overall effect size of 0.11 and a combined z greater than 7 sigma. In contrast, the slow-thinking experiments achieved an overall effect size of only 0.03, failing even to achieve a conventional level of statistical significance (p = .20)". According to the authors, "fast-thinking protocols are more likely to produce evidence for psi because they prevent conscious cognitive strategies from interfering with the automatic, unconscious, and implicit nature of psi functioning".   [ lower brain function as expected ]

This latest meta-analysis adds to previous data collections which suggest that precognition/presentiment is a natural (if very weak) human ability. Just last month I reported on a meta-analysis of results from seven independent laboratories testing physiological responses to stimuli, that concluded the human body "can apparently detect randomly delivered stimuli occurring 1-10 seconds in the future". And a 1989 meta-analysis of all forced-choice precognition experiments appearing in English-language journals between 1935 and 1977 - 309 experiments conducted by 62 different investigators involving more than 50,000 participants - also found a small but highly significant hit rate (p = 1.1 × 10-9). Both of those meta-analyses also reported that the file-drawer effect was an unlikely explanation, given the number of experiments that would be needed to overturn the positive result.

Other scientists - and skeptics - will no doubt have their say on this paper in due course, which will hopefully bring some clarification to the validity and overall importance of this meta-analysis. From the data presented in it though, it appears that the debate over human precognition and presentiment is a long way from settled. If only we could look into the future to see how this all plays out...
Posted by arclein at 12:00 AM

When a baseball player spots a high-flying baseball heading his way, he'll often start running in the right direction to catch it - and thereby arrive at the ball's future location before the ball gets there.

Does such an athlete use precognition to predict where the ball will be at a future time - or does his subconscious mind "calculate" the ball's trajectory using the same part of the brain that evolved to avoid incoming threats - like stones, arrows, and leaping carnivores?

Has this latest precognition research ruled out such rapidly calculated predictions?