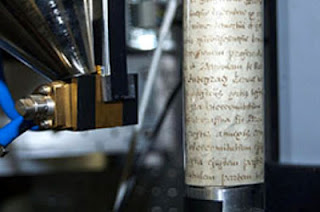 I think this should also work with that carbonized library they have in Italy. It is reacting with the non organics and that will work as well with those texts as well. Maybe we can recover the remainder of Livy's book on Roman history.

What will be recovered are a lot of texts that went out of favor, a long time ago before the intervention of the printing press. Once that happened, the capability to reproduce disappeared while the texts then demanded marketability. There no longer was a machinery in place to copy the obscure.

Thus treasured items simply became way too old to ever be copied. That changes now. Digital reconstruction combined with digital interpolation can generate the miracle of clean text.


Pioneering X-ray technology is making it possible to read fragile rolled-up historical documents for the first time in centuries.

Old parchment is often extremely dry and liable to crack and crumble if any attempt is made to physically unroll or unfold it. The new technology, however, eliminates the need to do so by enabling parchment to be unrolled or unfolded 'virtually' and the contents displayed on a computer screen.


Developed at Cardiff University and Queen Mary, University of London with funding from the Engineering and Physical Sciences Research Council (EPSRC), the breakthrough means historians will be able to access previously unusable written sources and gain new insight into the past.


No other technique developed anywhere in the world has the capability to make text concealed in rolled or folded historical parchments genuinely legible. The system has now been tested successfully on a 19th century scroll provided by the Norfolk Record Office.


In a completely innovative approach to the problem, the technique works by scanning parchment with X-rays in order to detect the presence of iron contained in 'iron gall ink' -- the most commonly used ink in Europe between the 12th and 19th centuries.


Using a method called microtomography, a 3-dimensional 'map' showing the ink's exact location is built up by creating images made from a series of X-ray 'slices' taken through the parchment.


Advanced software specially developed by the Cardiff project team combines the data obtained with information about the way the parchment is rolled or folded up and calculates exactly where the ink sits on the parchment. An image of the document as it would appear unrolled or unfolded can then be produced.


The key difference between the new method and other techniques previously developed to read un-openable historical documents is the unprecedentedly high contrast resolution it provides to distinguish between ink and parchment. This means the ink shows up very well against the parchment and is genuinely readable.


The scanning takes place at the Institute of Dentistry at Queen Mary, University of London led by Dr Graham Davis: "Because no commercial or research X-ray tomography scanners were capable of providing the quality of image we needed, we've developed our own advanced scanner which is also being adapted for a diverse range of other scientific uses, including those within our own Institute of Dentistry where enhanced, high contrast images are enabling the detection and analysis of features in teeth that we haven't been able to see before."


Professor Tim Wess of Cardiff University says: "This is a milestone in historical information recovery. The conservation community is rightly very protective of old documents and isn't prepared to risk damaging them by opening them. Our breakthrough means they won't have to. Across the world, literally thousands of previously unusable documents up to around a thousand years old could now become available for historical research. It really will be possible to read the unreadable."