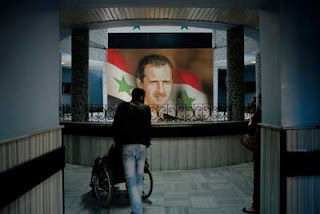 Yes, it appears that the rebels are losing as they must when outside intervention is ruled out. The Arab Spring confronted the dictatorships head on and gave then a choice of retreat or a blood bath. Libya chose the bloodbath and that was stopped by overwhelming US power. Belatedly, the Obama administration is waking up to this reality and is now trying to muster support for intervention before the rebel collapse.

Unfortunately, imposing a no fly zone now is pretty dicey after two years of hard fighting.

The truth has always been that a Sunni dominated Syria is very much in the interests of the US because it eliminates an unwelcome dictator happily working with the Iranians and their running dogs in Lebanon. It may even allow progress on Iraq and the Kurds. There was plenty to gain which is why they tentatively supported the rebels however dysfunctional it was.

If now that is not going to happen, then retreat becomes a little messy. Yet that is sometimes the least risky option for the USA.

The Fate of the Middle East in the Balance: Syria Endgame Approaching Fast

The tempo of events in Syria has accelerated in recent weeks. The government forces have scored significant battlefield victories over the rebels, and this has provoked a mixture of war provocations and peace offers from the U.S. and its anti-Assad allies.

With Obama’s blessing Israel fighter jets recently attacked Syria on three occasions; in one massive air strike on a military installation in Damascus 42 Syrian soldiers were killed. Shortly thereafter Obama finally agreed to a peace conference with Russia, which had been asking for such talks for months.

Obama is entering these talks from a weakened position; the Syrian government is winning the war against the U.S.-backed rebels, and success on the ground is the trump card of any peace talks. Obama and the rebels are in no position to be demanding anything in Syria at the moment.

It’s possible that Obama wants to avoid further humiliation in his Syria meddling by a last minute face-saving “peace” deal. It’s equally likely, however, that these peace talks are a clever diplomatic ruse, with war being the real intention. It’s not uncommon for peace talks to break down and be used as a justification for an intensification of war, since “peace was attempted but failed.”

And Obama has plenty of reasons to pursue more war: he would look incredibly weak and foolish if Syria’s president were to stay in power after Obama’s administration had already announced that Assad’s regime was over and hand picked an alternative government of Syrian exiles that the U.S. — and other U.S. allies — were treating as the “legitimate government of Syria.”

Here’s how the BBC referred to Obama’s Syrian puppet government:

“… the Syrian opposition’s political leadership – which wanders around international capitals attending conferences and making grand speeches – is not leading anyone. It barely has control of the delegates in the room with it, let alone the fighters in the field.”

If an unlikely peace deal is reached, these Syrian exiles — who only a tiny minority of the rebel fighters actually listen to — will be the ones to sign off on the deal.
4
Many politicians in the U.S. are still clamoring for war in Syria, based on the unproven accusation that the Syrian government used chemical weapons against the rebels. In actuality, however, the UN so far has only indicated that the exact opposite is true: there is significant evidence the U.S.-backed rebels used chemical weapons against the Syrian government:

Of course this fact only made the back pages of the U.S.media, if it appeared at all. Similarly bad news about the U.S.-backed rebels committing large scaleethnic/religious cleansing and numerous human rights violations didn’t manage to make it on to the front pages either. And the numerous terrorist bombings by the U.S.-backed rebels that have indiscriminately killed civilians have likewise been largely ignored by U.S. politicians and the media.

The U.S. position is weakened further by the fact that the majority of the rebel fighters are Islamic extremists, who are fighting for jihad and sharia law, not democracy. The Guardian reported recently:

“Syria’s main armed opposition group, the Free Syrian Army (FSA), is losing fighters and capabilities to Jabhat al-Nusra, an Islamist organization with links to al-Qaida that is emerging as the best-equipped, financed and motivated force fighting Bashar al-Assad’s [Syrian] regime.”

“Nowhere in rebel-controlled Syria is there a secular fighting force to speak of.”

But even with all these barriers to the U.S. dictating its terms to the Syrian government, Obama has trump cards of his own: the U.S. and the Israeli military.

It’s possible that the Israeli airstrikes on Syria were used as a bargaining chip with the proposed peace conference in Russia. If Obama threatened to bomb Syria into the Stone Age there is plenty of evidence —Afghanistan, Iraq, Libya — to back up this threat.

Following through with this kind of threat is actually considered intelligent foreign policy to many politicians in the U.S., since a country not aligned with the U.S. will have been weakened and fragmented as an opposing force, lowering the final barrier to war with Iran.

This is the essence of U.S. involvement in Syria, which is risking regional war that could include Lebanon, Turkey, Iraq, Israel, Iran, Jordan, and Saudi Arabia with the potential to drag in the bigger powers connected to these nations, the U.S. and Europe on one hand and Russia and China on the other.

The fate of the already-suffering Middle East is hanging in the balance
S
Posted by arclein at 12:00 AM