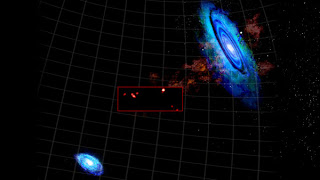 I have expected to find many additional proto galaxies that just have not fully coalesced as yet. It appears we are now developing the ability to find them. Other explanations are been suggested, but the process of coalescence is sufficient to produce plenty of new galaxies on a continuing basis.

It also confirms that intergalactic matter is conforming to the idea of an homogenous initial state if this all holds up.

At least we now know that massive amounts of hydrogen is out there in interstellar space.

Here's a new mystery for space observers: Astronomers have recently discovered a series of hydrogen clouds floating in a starless stretch of space between the Andromeda and Triangulum galaxies.

The clouds are enormous, or relatively small, depending on your reference point. They are much smaller than the two galaxies they lie between, but each of the clouds is itself a million times the mass of our solar system. Researchers say the clouds are roughly the size of dwarf galaxies, but they don't have any stars in them.

"What makes this discovery especially puzzling is you have these apparently free-floating clouds in intergalactic space whose origin is a complete mystery," said Felix J. Lockman, an astronomer at the National Radio Astronomy Observatory who helped discover them. "We don't know how long they have been around, or where they came from, or where they will end up in the end."

The clouds don't emit light or energy, but the neutral atomic hydrogen that they are made of gives off a distinct radio signal that astronomers were able to pick up using the National Science Foundation's Green Bank Telescope which measures radio waves.

About 10 years ago, astronomers in Europe surveyed this same stretch of space and thought they noticed a large reservoir of hydrogen gas between the two galaxies, but the signal was so faint that they couldn't be sure.

Since then, the highly sensitive Green Bank Telescope has brought the region into focus, allowing scientists to see that there is definitively hydrogen gas, and that it has clumped together into distinct blobs. The findings were published Wednesday in the journal Nature.

Now there are a lot more questions to answer: Did these clouds condense out of a hotter gas that we can't see? Were they pulled tidally from the Andromeda galaxy by another galaxy passing by, or will they eventually be cannibalized by the Andromeda galaxy and processed into stars?

Are massive hydrogen blobs common in starless patches of universe and we have just never discovered them before because we haven't had good enough telescopes?

"Our next plan is to use the same telescope to look at other places and see if there is more of these clouds," Lockman told the Los Angeles Times. "If they were pulled tidally from Andromeda then we may find others along a trail leading back to it."