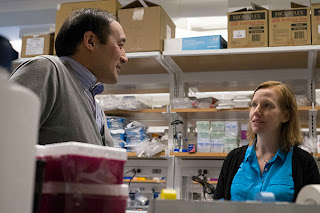 This is a stunner. It effectively reverses aging effects in the heart muscle. Most likely though, the diastolic effect is unique to the heart and is an effect of a developing age related deficiency that this protein resolves. The sure promise here is that we can restore youthfulness to the heart itself. It may not end heart disease but it certainly will also strengthen a damaged heart at least. This is very good news.

Obviously restoration of heart function and strength will also restore blood flow and eliminate illness brought on by such limitations.

Again this is pleasant surprise.

Two Harvard Stem Cell Institute (HSCI) researchers — a stem cell biologist and a practicing cardiologist at Brigham and Women’s Hospital — have identified a protein in the blood of mice and humans that may prove to be the first effective treatment for the form of age-related heart failure that affects millions of Americans.

When the protein, called GDF-11, was injected into old mice, which develop thickened heart walls in a manner similar to aging humans, the hearts were reduced in size and thickness, resembling the healthy hearts of younger mice.

Even more important than the implications for the treatment of diastolic heart failure, the finding by Richard T. Lee, a Harvard Medical School professor at the hospital, and Amy Wagers, a professor in Harvard’s Department of Stem Cell and Regenerative Biology, ultimately may rewrite our understanding of aging.

A report on Lee and Wagers’ findings was published today by the journal Cell.

“The most common form of heart failure [in the elderly] is actually a form that’s not caused by heart attacks but is very much related to the heart aging,” said Lee, who, like Wagers, is a principal faculty member at HSCI.

“In this study, we were able to show that a protein that circulates in the blood is related to this aging process, and if we gave older mice this protein, we could reverse the heart aging in a very short period of time,” Lee said. “We are very excited about it because it opens a new window on the most common form of heart failure.”

He added, “This is the coolest thing I’ve ever been a part of.”

“I have 300 patients right now, and I think I have about 20 who are suffering from this type of heart failure, which we sometimes call diastolic heart failure,” said Lee. “They come into the hospital, have a lot of fluid taken off, then they’ll go home. Then they come back again. It’s really frustrating because we don’t have any drugs to treat this. We need to work as hard as we can to figure out if this discovery can be turned into a treatment for heart failure in our aging patients.”

The Lee and Wagers labs now are focused on moving GDF-11 toward clinical trials — which Lee predicts could begin in four to five years — and learning what other tissue types the protein might affect.

Wagers, who since her postdoctoral days at Stanford has been working with what is called the parabiotic mouse system — in which mice share a circulatory system — previously showed that factors in the blood of young animals, which until now had been unidentified, have a rejuvenating effect on various tissues in older animals, particularly in the spinal cord and musculature.

“As we age, there are many changes that occur in different parts of the body,” Wagers said, “and those changes are often associated with a decline in the function of our bodies. One of the interests of my laboratory is in understanding why this happens and whether it is an inevitable consequence of aging, or if it might be reversible.

“In this study, we compared young and old animals and identified a substance in the blood that is present at high levels when you’re young, and lower levels when you’re old. We further found that when we supplemented the low levels of this substance that were present in old animals to the levels normally seen in youth, this could have a dramatic effect on the heart.

“It’s been observed for many, many years that when aging occurs it affects multiple body systems sort of in a semi-synchronous way,” Wagers said, “and this suggests that there may be some common signal that drives the body’s response to getting older. We hypothesized that this common signal might be a substance that was traveling in the bloodstream, because the bloodstream accesses organs throughout the body.”

“I think Amy and I started thinking about something like this almost five years ago,” said Lee, who added that he and Wagers were brought together by HSCI. “Without the Harvard Stem Cell Institute, this never would have happened,” he said.

The researchers conducted their first experiment about four years ago, and the results were startling, Lee said. “A fellow named Francesco Loffredo was examining the hearts of the aging mice. He came to me and said, ‘You don’t have to analyze it; you can see it with the naked eye.’ I couldn’t believe that, and I said ‘Go back, analyze it, and do it blinded.’ Then I looked at the hearts, and I could see he was correct,” Lee recalled.

“When we started these experiments, I actually was thinking that there would not be a response,” Wagers said. “We had been using similar kinds of approaches in other tissues, regenerative tissues, tissues that we know have the capacity to heal themselves after they’ve been injured. But the heart is not well known for doing that, and so I was quite convinced that there would be no response. When I saw the dramatic difference in heart size that was very apparent after this exposure of an old animal to young blood, it was very clear that we had to figure out what was going on,” she said.

“After about 2½ years we were convinced, and said, ‘We really have to identify this factor.’ It took about six months to find something, and another year to be convinced that it was real,” Lee said. “We looked at lipids; we looked at metabolites. Then we set up a collaboration with a startup company in Colorado, called SomaLogic, that had an interesting technology for analyzing factors in blood. And by working closely with SomaLogic, we found the likely factor.”

What the researchers found was that at least one of the factors causing the rejuvenation of the hearts was GDF-11, “a member of a very important family of proteins called TGF-beta proteins, for transforming growth factor. There are around 35 members of the family,” Lee said. “Some have been very well studied, and this is one that is relatively obscure.”

Over the course of her still-early career, Wagers has celebrated the publication of important papers by going skydiving. This coming weekend, she plans to take the plunge again, this time accompanied by postdoc Loffredo.

The work was supported in part by HSCI, the National Institutes of Health, and the American Heart Association.