IRS Engaged in Extralegal Suppression of US Citizens 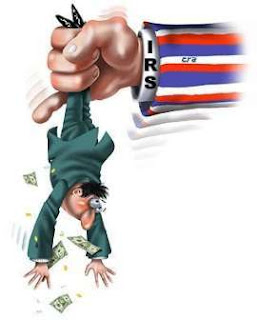 Of course this is profoundly wrong and the inevitable road to the outright evil of using governmental coercive powers without meaningful oversight and or authority.  It is just too easy and just too easily for the weak minded to rationalize.

The fact remains that the IRS has been given broad coercive power mostly on the premise that one has to scare tax evaders to gain their cooperation.  If that were such a good idea, one must ask why we receive scant taxes from drug dealers.  As happens with any petty bureaucracy, they target the weak and the unlucky.  This is wrong.  Particularly since individuals have made off with as much funds as can be collected from the audiences targeted put together.

Far too much of our civilization is suffering from the tyranny of gigantism.  Countering this has not even begun while we are now experiencing the difficulties.   Without question it is becoming the worst problem we are facing.  Class two talent given giant power can only drive awful results.

The Other IRS Scandal: Outright War Against Marijuana Dispensaries

“Should the IRS campaign be successful, it will … eliminate tens of thousands of well paying jobs, [and] destroy hundreds of millions of dollars of tax revenue.”

Dispensaries providing marijuana to doctor-approved patients operate in a number of states, but they are under assault by the federal government. SWAT-style raids by the DEA and finger-wagging press conferences by grim-faced federal prosecutors may garner greater attention, but the assault on medical marijuana providers extends to other branches of the government as well, and moves by the Internal Revenue Service (IRS) to eliminate dispensaries’ ability to take standard business deductions are another very painful arrow in the federal quiver.

The IRS employs Section 280E, a 1982 addition to the tax code that was a response to a drug dealer’s successful effort to claim his yacht, weapons purchases, and even illicit bribes as business expenses. Under 280E, individuals involved in the illicit sale of controlled substances — including marijuana, even medical marijuana in states where it is legal — cannot claim standard business expenses on their federal taxes.

“The 280E provision which requires certain businesses to pay taxes on their gross income, as opposed to their net income, is aimed at shutting down illicit drug operations, not state-legal medical marijuana dispensaries,” said Kris Hermes, spokesman for the medical marijuana defense group Americans for Safe Access.” Nonetheless, the Obama Administration is using Section 280E to push these local and state licensed facilities out of business.”

The provision can be used to great effect. ’s Harborside Health Center was hit with a $2 million IRS assessment in 2011 after the tax agency employed Section 280E against. Harborside is fighting that assessment, even as it continues to try to fend off federal prosecutors’ attempts to shut it down by seizing the properties it leases. Similarly, when the feds raided Richard Lee’s that same year, it wasn’t just DEA, but also IRS agents who stormed the premises. Lee said it was because of a 280E-related audit.

The attacks on Harborside and Oaksterdam were part of an IRS campaign of aggressive audits using 280E to deny legitimate business expenses, such as rent, payroll, and all other necessary business expenses. These denials result in astronomical back tax bills for the affected dispensaries, threatening their viability — and patients’ access to their medicine.

“Should the IRS campaign be successful; it will throw millions of patients back in to the hands of street dealers; eliminate tens of thousands of well paying jobs, destroy hundreds of millions of dollars of tax revenue; enrich the criminal underground; and endanger the safety of communities in the 17 medical cannabis states,” said Harborside’s Steve DeAngelo as he announced the 280E Reform Project to begin to fight back.

It’s going to be an uphill battle. In the last Congress, Rep. Pete Stark (D-CA) introduced House Bill 1985, the Small Business Tax Equity Act, designed to end the 280E problem for medical marijuana businesses, but it went to the and Means Committee, where it was never heard from again.

Still, something needs to happen, said Betty Aldworth, deputy director of the National Cannabis Industry Association, which this year is working with members of Congress to try to find a fix for the 280E problem.

“When Section 280E was created in the 1980s, no one imagined state-legal marijuana providers,” Aldworth told the Chronicle. “Whether or not it is part of a larger effort to curtail the development of regulated models for providing marijuana, which is a model that is clearly preferable to leaving this popular and relatively safe medicine (or adult product) in the underground market, these onerous tax rates have severely hampered the development of the regulated market.”

It’s a brake on the overall economy, Aldworth said.

“Not only has it resulted in stymieing job development, but it also curtails other economic activity such as reinvestment in business and the rippling positive effects of that spending,” she argued. “And in many cases, it has created a tax burden that is simply unbearable: many providers have had to close their doors and lay off their staffs because the tax burden was simply too great.”

Because of this unintended application of 280E, medical marijuana providers are paying overall taxes at a rate two to three times those of other small businesses, Aldworth said.

“It’s important to note that just as they want to apply for licenses, follow regulations, and otherwise participate in the legal business community, state-legal marijuana providers also want to pay their fair share of taxes,” she pointed out. “Most small businesses pay an effective tax rate of between 13% and 27% on net income, according to the Small Business Administration. State-legal marijuana providers pay an average effective tax rate of 65-80%. An industry that can provide thousands of jobs is being held back by these crazy tax rates.”

While the lobbyists look to Congress for a fix, one academic tax law expert thinks he has hit upon a novel solution, but not everyone agrees.

Benjamin Leff, a professor at American University’s Washington College of Law, raised eyebrows at a Harvard University seminar this spring when he presented his report,Tax Planning For Marijuana Dealers, where he suggested that dispensaries get around 280E by registering with the IRS as tax-exempt social welfare organizations, known as 501(c)(3)s or 501(c)(4)s.

The IRS has already ruled that medical marijuana providers can be exempt under 501(c)(3) because its “public policy doctrine” does not allow charitable organizations to have purposes contrary to law, but in the paper, Leff argued that “a state-sanctioned marijuana seller could qualify as tax-exempt under 501(c)(4), since the public policy doctrine only applies to charities, and 501(c)(4) organizations are not charities.”

The organization would have to be operated to improve the social and economic conditions of a neighborhood blighted by crime or poverty, by providing job training, employment opportunities, and improved business conditions for commercial development in the neighborhood, just like many existing community economic development corporations that run businesses.

“When taxes get too high, you can drive compliant dispensaries out of business,” Leff told the Chronicle.

Americans for Safe Access’ Hermes would agree with that, but he’s not so sure about Leff’s idea.

“The concept of medical marijuana dispensaries registering with the federal government as a 501(c)(4) in order to sidestep section 280E is novel and may be hypothetically valid,” he said. “However, the IRS will refuse to grant tax-exempt status to a business that the agency believes is violating federal law. Perhaps, it would be possible for a dispensary to obtain 501(c)(4) status under false pretenses, but such status would not very likely withstand an IRS audit.”

There are better ways, he said.

“A much more realistic and sensible approach — pending a change to the federal classification of marijuana for medical use — is to amend the tax code to exclude state-lawful medical marijuana businesses from Section 280E,” Hermes recommended. “This is the kind of legislation that Congress should pass in order to allow states to implement their own medical marijuana laws, without undue interference by the federal government.”

“I agree with everything he said,” Leff replied. “But it’s not just the Obama administration that is using 280E this way. The Supreme Court has held that there is no exception to the Controlled Substances Act for state-level legal marijuana sales, and since 280E makes references to Schedule I controlled substances, it applies to legal marijuana unless Congress changes the law. I totally agree that Congress should amend 280E to exempt marijuana selling that is legal under state law. Congress could also amend the Controlled Substances Act to remove marijuana from it, which would probably also make sense,” he added.