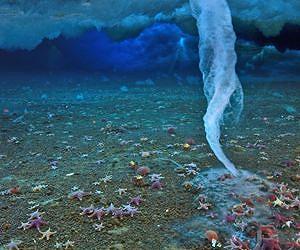 I do not see that there is actual evidence here for this speculation. However we also know that another researcher froze some organic precursors for twenty years and did get encouragement. The fact remains that we are just breaking into slow cold chemistry to see where it all takes us and right now we can expect surprises.

Thus brinicles become interesting if we can set up a stable experimental system that uses them. They are the cold water analog of the volcanic hot spring.

It is all suggestive for now.


Life on Earth may have originated not in warm tropical seas, but with weird tubes of ice - sometimes called "sea stalactites" - that grow downward into cold seawater near the Earth's poles, scientists are reporting.

Their article on these "brinicles" appears in ACS' journal Langmuir.

Bruno Escribano and colleagues explain that scientists know surprisingly little about brinicles, which are hollow tubes of ice that can grow to several yards in length around streamers of cold seawater under pack ice.

That's because brinicles are difficult to study. The scientists set out to gather more information on the topic with an analysis of the growth process of brinicles.

They are shown to be analogous to a "chemical garden," a standby demonstration in chemistry classes and children's chemistry sets, in which tubes grow upward from metal salts dropped into silicate solution. But brinicles grow downward from the bottom of the ice pack.

The analysis concluded that brinicles provide an environment that could well have fostered the emergence of life on Earth billions of years ago, and could have done so on other planets.

"Beyond Earth, the brinicle formation mechanism may be important in the context of planets and moons with ice-covered oceans," the report states, citing in particular two moons of Jupiter named Ganymede and Callisto.

Billions of years ago?

How large would the sun have been back then? Scientists ALSO tell us hat the sun is shrinking a little every year.

So, billions of years ago the sun would have been large enough to fry every thing in our solar system.

Trying to say that creation came from nothing & no outside force acted on the very 1st matter of the 'big bang' takes a LOT of faith.

How did the so called 1st cell know what to do next? How did the cell know how to divide? How to create DNA & include it in the process? Or is DN another 'miracle' accident?

Though I don't claim to know or understand it all, I am sticking with Nature's God as the Creator.

He takes a lot less faith to believe in.