A Win for the Bees 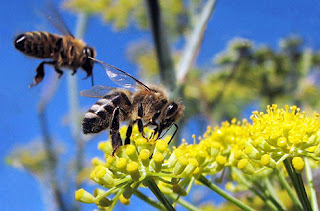 1 The bee population collapse is continuing and possibly accelerating. It is certainly happening everywhere the pesticides are been used. The bees are been subjected to a winnowing gauntlet and at a certain threshold, the population does collapse.

2 The actual science is steadily trickling in and a damning body of work is been amassed. Yet the industry continues to play their game of obstruction, denial and misinformation to postpone regulatory action.

The third shoe is also about to drop. It is that the protocol that saturates the environment with this pesticide is losing its effectiveness and will likely fail soon enough but not before maxing out the more is better.

I will expect to see key statistics diverge in Europe from the USA with this ban in effect. We do not know just how fast a reversal can be brought to bear.

A Win for the Bees: EU Votes to Ban Bee-Harming Pesticides

Victory for bees, but more must be done to ensure safety of bee population, global food
- Jacob Chamberlain, staff writer


In a historic vote on Monday, the European Union banned the use of bee-harming pesticides across the continent for a minimum of two years, garnering praise from environmental groups who have said that the population of the vital pollinators, along with the global food supply, are in grave danger due to the widespread use of the chemicals.

(Flickr / Treesha Duncan / Creative Commons License)The vote is the first of its kind and suspends three of the world's most widely-used pesticides—known as neonicotinoids. However, critics have said the two-year suspension is not enough, meaning bees are not safe until the pesticides are banned permanently.

Though the vote did not reach the required majority under EU voting rules, the hung vote moves to the European Commission (EC) who will implement the ban. "It's done," an EC source told the Guardian.

Despite pesticide industry influence, a majority of countries voted to place a two year restriction on three neonicotinoid products linked to a wide-range of harms to honey bees: clothianidin, imidacloprid and thiamethoxam. The EU vote comes after significant findings by the European Food Safety Agency that these pesticides pose an unacceptable risk to bees and their use should be restricted. Along with habitat loss and pathogens, a growing body of science points to neonicotinoid pesticides as a key factor in drastically declining bee populations.

The landmark suspension is a victory for millions of environment campaignersconcerned about dramatic declines in bees who were backed by experts at the European Food Safety Authority (EFSA). But it is a serious defeat for the chemical companies who make billions a year from the products and also UK ministers - who voted against the ban. Both had argued the ban will harm food production.

Paul Towers, a spokesperson for PAN North America today urged the U.S. to follow suit and listen to growing scientific evidence, rather than voices from the pesticide industry:

European leaders followed the weight of the scientific evidence and moved swiftly to protect bees from the harms of neonicotinoid pesticides. U.S. officials, especially the Environmental Protection Agency, should be emboldened by European action rather than yielding to pressure from pesticide corporations. Unless U.S. officials act soon, bee populations may not recover, threatening the livelihood of beekeepers and the agricultural economies that rely on pollination and honey production.

However, the vote is only a temporary ban on the use of the pesticides, which, according to critics, does not go far enough to protect the survival of bees.

Whilst we welcome the EU vote as a significant step forward, we are dismayed that it is only a temporary half measure which goes nowhere near far enough in protecting our bees and other vital pollinators from the harm of neonicotinoid pesticides.

Friends of the Earth's Head of Campaigns Andrew Pendleton said:

This decision is a significant victory for common sense and our beleaguered bee populations.

"Restricting the use of these pesticides could be an historic milestone on the road to recovery for these crucial pollinators.

"But pesticides are just one of the threats bees face - if David Cameron is genuinely concerned about declining bee numbers he must urgently introduce a Bee Action Plan.

The countries that voted against the ban were: the UK, Czech Republic, Italy, Hungary, Romania, Slovakia, Austria and Portugal. Ireland, Lithuania, Finland and Greece abstained.