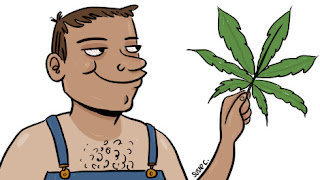 Let it be said that the battle is about to be joined. The law is bone stupid with zero scientific rational. Now the Fed will be likely forced to defend its nonsense.

The real reason that it has been illegal is a little simpler. Any rogue farmer can place a small handful of the active plants among his hemp plants and make it nigh impossible for it to be detected. It will be back to the glory days of the moonshiners.

Yet the momentum for changing all these laws is nicely building, so sooner or later the war on drugs will be reformulated and this nonsense will end.

By the by, I have zero interest in using these drugs myself and have never been even slightly tempted. I think that use and abuse is insane if it must be tightly managed and restricted to specifics such as beer (two pints only), wine (one glass with a meal) and the like.

However I do object to a regulatory protocol that underwrites any form of criminality that is rewarded to enslave victims. End that and ninety eight percent of the whole problem will evaporate into thin air like a bad odor.

What do you do when the federal government won’t let you plant a sustainable, super-useful crop on your own land? Well, if you’re Ryan Loflin, you do it anyway.

As of this week, Loflin has planted America’s first real crop of industrial hemp in more than a half-century.

The 40-year-old farmer from Springfield, Colo., has been scheming for months. “I believe this is really going to revitalize and strengthen farm communities,” Loflin told the Denver Post in April. Now he’s leased 60 acres of his father’s alfalfa farm to plant and tend the hundreds of hemp starters he’s already been grooming.

Hemp, for those who aren’t familiar, is a variety of cannabis that — sorry kids! — won’t get you high. Strong, nutritious, and super sustainable to grow, hemp is used for everything from rope to cereal. It requires few herbicides, and has even been called carbon negative by some boosters. And while it’s illegal to grow it in the U.S., it’s not illegal to sell. Right now imported hemp — the only legal kind — accounts for about $500 million in annual U.S. sales, according to the Hemp Industries Association.
So what if it were homegrown, Loflin-style?
Loflin’s not completely on his own here. Colorado legalized hemp, along with recreational marijuana, last November. Last week, Colorado passed a bill that would register hemp farmers with the stateand create a committee that would work with farmers and the Department of Agriculture to (hopefully) keep plants in the fields and farmers out of jail.

“This is monumental for our industry,” Bruce Perlowin, chief executive of Hemp Inc., told the Denver Post. “It will unlock a clean industrial revolution that will be good for the economy, good for jobs, and good for the environment.”

In April, Kentucky passed a measure to legalize industrial hemp production, over the objections of local law enforcement who said it would turn the state’s residents into a bunch of stoners. Kentucky farmers are a bit more cagey about plowing ahead Loflin-style, though, and are instead lobbying the feds to just make this stuff legal already.

So far, though, the feds aren’t buying it. The Industrial Hemp Farming Act of 2013, first introduced in Congress in February, is currentlychilling on a couch in committee, with no vote in sight.

Because that dank shit sustainable fiber is still straight-up Schedule I illegal, hemp farmers don’t qualify for federal crop insurance and other government benefits afforded to farmers of legal crops. And fear of reprisal is keeping many farmers and researchers away, even in states that say it’s OK.

“The law is clear on this matter,” a board member at Colorado State University, a top farming research school, wrote in a letter to U.S. Rep. Jared Polis (D-Colo.), “and we do not want to do anything that would unintentionally result in personal criminal liability for CSU employees or that would disqualify the institution from obtaining future government funding.”

Without movement in Washington, this fibrous future rests with folks like Loflin, who are willing to risk jail time for this plant. But even if Loflin lands behind bars, he’ll always be able to say he was the first. Ashe told Denver’s Westword, “It’s my crazy competitive nature.”

I don't know but I've been told. When hemp and cannabis are near each other they cross pollinate and ruin the quality of the drug. If you want to stop the growing of cannabis all you need to do is allow hemp.