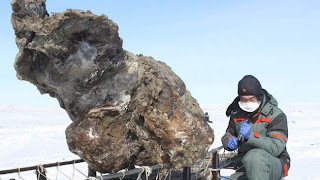 This makes the production of mammoth clones far more likely. We have preserved blood, although no comment yet on actual viability, but flesh also preserved extremely well. If it is possible to extract DNA, we could hardly ask for a better sample.

So a baby mammoth in our future went to a well maybe to very plausible. I thin we are looking at mama. It also tells us that when we get this happening, that we will also generate a decent number of unique individuals which will ensure a robust core population.

This will fuel the building excitement in this pending species resurrection which is still been largely ignored.

Once we master the mammoth, it will be possible to swiftly resurrect the whole Pleistocene biome itself. The Mammoth has been in our face, but considering how everything actually died, we can explore promising waterholes in particular to find additional species. 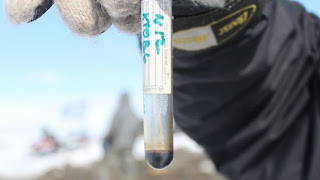 The frozen body of a 10,000 to 15,000 year old mammoth found on a remote island in the Arctic Ocean has yielded a stunning find: blood so well preserved that it flowed freely from the ancient mammal, according to Russian scientists.

Scientists with the Research Institute of Applied Ecology of the North, North-Eastern Federal University, and the Russian Geographical Society announced on Wednesday the amazing news, following the study of the carcass of a female mammoth in good preservation on Lyakhovsky Islands of Novosibirsk archipelago.

'The blood is very dark, it was found in ice cavities below the belly and when we broke these cavities with a poll pick, the blood came running out.'

- Semyon Grigoriev, the head of the expedition and chairman of the Mammoth Museum.

“The blood is very dark, it was found in ice cavities below the belly and when we broke these cavities with a poll pick, the blood came running out,” said Semyon Grigoriev, the head of the expedition and chairman of the Mammoth Museum.

“Interestingly, the temperature at the time of excavation was -7 to – 10 degrees Celsius [19.4 to 14 degrees Fahrenheit]. It may be assumed that the blood of mammoths had some cryoprotective properties.”

The muscle tissue of the frozen carcass was also stunning -- the color of fresh meat, Grigoriev said, totally unlike meat that is centuries old.

“The fragments of muscle tissues, which we’ve found out of the body, have a natural red color of fresh meat. The reason for such preservation is that the lower part of the body was underlying in pure ice, and the upper part was found in the middle of tundra.”

Wooly mammoths are thought to have died out around 10,000 years ago, although scientists think small groups of them lived longer in Alaska and on Russia's Wrangel Island off the Siberian coast.

Scientists already have deciphered much of the genetic code of the woolly mammoth from balls of mammoth hair found frozen in the Siberian permafrost. Some believe it's possible to recreate the prehistoric animal if they find living cells in the permafrost.

Those who succeed in recreating an extinct animal could claim a "Jurassic Park prize," the concept of which is being developed by the X Prize Foundation that awarded a 2004 prize for the first private spacecraft.
Posted by arclein at 12:00 AM