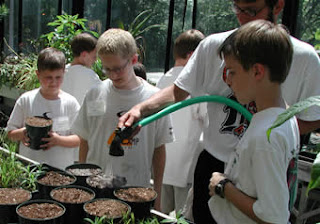 The take home of course, is that it is necessary to listen to the students as they struggle with the new concepts been presented. That will flush out already established error. From that starting point, the teacher then has a chance to be effective.

Whenever we set out to change a paradigm in people's thinking, it is the same problem. They already have a satisfactory solution in hand that they have no reason to question. Electricity flowing like water is a great idea and works very well. It just has zero connection to physical reality.

Let us not forget Newton's work. It is totally correct until you attempt impossible things rather distant from out Newtonian space.

The point I wanted to make here is that your preconceived notion is not wrong so much as incomplete and lacking rigor and all that does not matter if you never experience a need to know.

What this also tells us is that this type of test needs to be selectively marked for weaknesses that the teacher can pick up on and work with.

May 2, 2013 — As part of an unusual study, Philip Sadler, the Frances W. Wright Senior Lecturer in the Department of Astronomy, and colleagues tested 181 middle school physical science teachers and nearly 10,000 of their students, and showed that while most of the teachers were well-versed in their subject, those better able to predict their students' wrong answers on standardized tests helped students learn the most.

If you had to explain what causes the change in seasons, could you? Surprisingly, studies have shown that as many as 95 percent of people -- including most college graduates -- hold the incorrect belief that the seasons are the result of the Earth moving closer to or further from the sun.

The real answer, scientists say, is that as Earth's axis is tilted with respect to its orbit, when on its journey it is angled inward, the sun rises higher in the sky, and that results in more direct sunlight, longer days, and warmer temperatures. Distance plays no role; we are actually closest to the sun in the dead of winter, during the first week of January.

Why do so many people continue to hold the wrong idea? The answer, said Philip Sadler, the Frances W. Wright Senior Lecturer in the Department of Astronomy and director of the science education department at the Harvard-Smithsonian Center for Astrophysics (CfA), may be found in what science teachers know.

As part of an unusual study, Sadler and colleagues tested 181 middle school physical science teachers and nearly 10,000 of their students, and showed that while most of the teachers were well-versed in their subject, those better able to predict their students' wrong answers on standardized tests helped students learn the most. The findings are described in a paper published last month in the American Educational Research Journal titled "The Influence of Teachers' Knowledge on Student Learning in Middle-School Physical Science Classrooms."

"What our research group found was that for the science that people considered factual, teacher knowledge was very important. If the teachers didn't know the facts, they couldn't convey them to the students," Sadler said. "But for the kinds of questions that measure conceptual understanding, even if the teacher knew the scientific explanation, that wasn't enough to guarantee that their students would actually learn the science."

Sadler pointed to the question of what happens to a lamp when the power cord is squeezed.

"Middle school students say if you squeeze hard you will see the light gets dimmer, even though they've stepped on that cord before, or they've put the corner of their chair on that cord before, and nothing has happened," he said. "Their theoretical understanding of the way the world works includes the idea that electricity is like water flowing through a garden hose. If you put some pressure on the cord, you will get less electricity out the other end. It turns out that for most major scientific concepts, kids come into the classroom -- even in middle school -- with a whole set of beliefs that are commonly at odds with what scientists, and their science teachers, know to be true."

If teachers are to help students change their incorrect beliefs, they first need to know what those are. That's where the standardized tests developed by Sadler and his colleagues come in. Multiple-choice answers were gleaned from hundreds of research studies examining students' ideas, particularly those that are common -- such as electricity behaving like water.

For the study described in their paper, Sadler and his colleagues asked teachers to answer each question twice, once to give the scientifically correct answer, and the second time to predict which wrong answer their students were likeliest to choose. Students were then given the tests three times throughout the year to determine whether their knowledge improved.

The results showed that students' scores showed the most improvement when teachers were able to predict their students' wrong answers.

"Nobody has quite used test questions before in this way," Sadler said. "What I had noticed, even before we did this study, was that the most amazing science teachers actually know what their students' wrong ideas are. It occurred to us that there might be a way to measure this kind of teacher knowledge easily without needing to spend long periods of time observing teachers in their classrooms."

To help teachers hone this knowledge, Sadler and his colleagues have made the kind of tests used in their study publicly available. More than a dozen tests covering kindergarten through grade 12 are downloadable here, after completing a tutorial on their development and interpretation.

Going forward, Sadler said he hopes to conduct similar studies in the life sciences, particularly around concepts such as evolution and heredity. He also plans to study what types of professional development and new teacher preparation programs help improve instructors' facility in knowing what their students know.

Ultimately, Sadler said, he hopes teachers will be able to use the tests to help design lessons that change students' incorrect ideas and help them learn science more quickly and easily. This is particularly important as states adopt the recently released Next Generation Science Standards.

"State certification for teaching science might well include making sure that new teachers are aware of the common student misconceptions that they will encounter, as well as being proficient in the underlying science," said Sadler. "Prior to this, there has never been an easy way to measure teachers' knowledge of student thinking, while we have probably been placing too much emphasis on testing for advanced scientific knowledge.

"Everyone has had a teacher or professor who is incredibly knowledgeable about their field, yet some of them are less-than-stellar teachers," he continued. "One of the reasons for this is that teachers can be unaware of what is going on in their students' heads, even though they may have had exactly the same ideas when they were students themselves. Knowledge of student misconceptions is a critical tool for science teachers. It can help teachers to decide which demonstration to do in class, and to start the lesson by asking students to predict what's going to happen. If a teacher doesn't have this special kind of knowledge, though, it's nearly impossible to change students' ideas.

"The best teachers base their lessons on what the American humorist-philosopher Will Rogers observed: It ain't what they don't know that gives them trouble, it's what they know that ain't so."