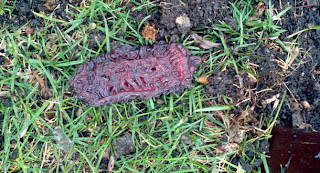 This phenomena keeps popping up. In this case it is associated with a lightening discharge. In the past it has been associated with meteor events also but it is all about a passage through the atmosphere producing a killing shock event able to knock out objects contained in the atmosphere. In this case, what we are finding is a gel like remnant of what we presume was a living entity.

My conjecture is that we are looking at a methane filled slime mold bladder capable of reaching the Stratosphere that forms up in wet lands before becoming airborne. This sample is suggestive of way more complexity, but we simply lack a clear grasp of what this is yet.

Someone needs to get the word out to look for these things although there is plenty of insect foam and the like out there. This would produce a decent cross section of evidence that we can work witn.

What The Hell Is It? Bizarre “Organism” Appears After Lightning Strike

Those are just a few of the questions asked after a streak of lightning struck a man’s front yard this weekend, blowing a hole in the ground and revealing a Lovecraftian monstrosity smoking in the dirt. Believing it to be an organic creature of some kind, the man wasted no time texting photos of the gross-looking thing to his friends, one of whom took to social media for answers.

Immediately, theories began to pour in from morbidly curious internet slueths, ranging from everything to a coagulated earthworm colony, to fulgarite, to a fried Koosh ball, to the hilariously horrifying“lightning placenta”.

“I just poked it, it’s definitely rubbery/squishy,” Ben replied. “There appear to be no bones.”
Many of the armchair skeptics settled on the Koosh theory, but a few hours later another surfer popped in to add that a similar event had been witnessed by him, providing an even weirder photo of the same phenomena.

As of yet, it would seem that no satisfying answer can be found in the case of the alien mystery meat, and it meant that there was only one test worth implementing before forming an opinion:

Time to incorporate that technique into modern paranormal investigation. And why not? It makes more sense than the Ovilus.
Posted by arclein at 12:00 AM