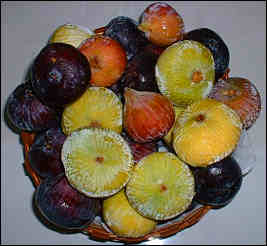 This is an interesting issue. First of, it is the most transportable fruit we can imagine. The simple act of drying allows it to be carried on land and at sea. This likely even preserves pollination insect larvae. Thus our conjecture regarding the global Atlantean world pretty well demands such a global distribution. Plenty of other crops also made the Bronze Age trip although with spotty results.

That a wide range of separate varieties gives a year round harvest certainly drove any general effort to move the horticulture.


We have really just begun to explore this fruit or even make full use of it.


Is the Humble Fig More Than Just a Fruit?

May 2, 2013 — Figs and fig trees are familiar to a wide cross-section of human society, both as a common food and for their spiritual importance. What is less well understood is the global nature of this association between figs and humans, which is maintained across species, continents and societies. This relationship is explored by David Wilson of Ecology and Heritage Partners and Anna Wilson from the University of Melbourne in Australia in a paper published in the Springer journal Human Ecology. Using examples from around the world, the authors show that figs are a vital resource for humans, no matter which species are present in a region.


It is well known that figs are a recurring theme in religion: it is the first fruit tree mentioned in the Bible, and some traditions believe that it was the forbidden fruit in the Garden of Eden. It was the tree under which Buddha received enlightenment. Figs can also have powerful impacts on everyday life, both in a positive or negative fashion. For instance, Kikuyu women in Africa smear themselves with the sap of fig trees to ensure pregnancy.. In Bolivia, soul-stealing spirits dwell in the canopy of figs and walking under, or felling, these trees can cause illness. In Papua New Guinea, figs are believed to be the haunt of evil spirits which would be released if they are felled.

Aside from their spiritual connections, figs provide a range of material uses, and the authors explore examples of these from around the world. The fig is an important food source for both humans and animals, in both fresh and dried form. Different species of fig bear fruit at different times, so in areas where there are a large variety of fig species, fruit can be available all year round. In addition to human uses, shoots and leaves of fig trees are used for animal fodder, which can sustain livestock through otherwise lean periods.

In addition to being a food source, the bark and roots from fig trees are used for manufacturing items such as barkcloth, handicrafts, shields and buildings. The authors provide examples of barkcloth manufacture from Mexico, Uganda and Sulawesi. Despite the different fig species involved, the same method for making barkcloth has evolved three times -- a remarkable demonstration of cultural convergent evolution. Figs are also a source of traditional medicine with sap being used to treat a variety of illnesses from intestinal upsets to heart problems and malaria. While the treatments vary between areas, the modes of preparation and administration are highly conserved.

Figs and fig trees have a seemingly inexhaustible list of qualities and uses. Despite populations being continents apart, there are consistent similarities in the ways in which the fig and its tree are valued. The authors hope to emphasize the global nature of this relationship. They also provide hints that figs may benefit from humans by providing two examples where figs have used humans as a dispersal agent. Ficus religiosa in south-east Asia is spread by Buddhists and all fig species in Fundong, Cameroon, have been introduced from elsewhere. Given the examples the authors provide, further work is likely to further uncover just how close the connection is between humans and figs.