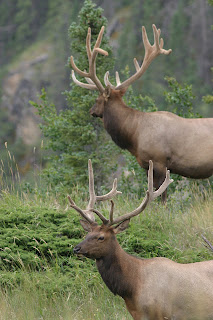 How they may be underestimated escapes me. It is all about farming which by its very nature manages the land resource and sometimes unwisely.  Farming naturally wants everything out there to come to account.  Thus forage is cropped carefully rather that naturally for optimal results.  Unsurprisingly this encourages different behavior among herbivores.

No longer are we hunting out carnivores to extinction either and they are recovering.

The real changes that took place with the first century of agricultural humanity in were horrific.  Now those same lands have been depopulated creating a very different situation.  The next century will see a repopulation and recreation of the agricultural biome that will integrate the wild and the margins.  I could not imagine a more vigorous human impact if I tried.

A comprehensive five-year study by University of Calgary ecologists -- which included monitoring the activity of wolves, elk, cattle and humans -- indicates that two accepted principles of how ecosystems naturally operate could be overshadowed by the importance of human activity.

"Understanding the significance of the impact that humans have on ecosystems is a critical component in formulating long-term and effective conservation strategies," says principal investigator Marco Musiani.


"Our results led us to believe that ecologists have underestimated the impact of humans on natural food chains. The data we collected shows that humans are deliberately or inadvertently engineering ecosystems regardless of whether they would be naturally pre-disposed to top-down or bottom-up effects. Even in protected areas, the influence of humans might be greater than we previously thought."


Ecologists have long debated whether natural ecosystems and associated food chains are primarily regulated by predators or by the productivity of plant species, called top-down and bottom-up effects, respectively. With most of the world's ecosystems now dominated by humans, researchers from the of sought to understand how much people influenced food chains in southwest .


Lead author Tyler Muhly, PhD, said the study -- a collaboration between NSERC, Shell Canada, Parks Canada, the Alberta Government and the Universities of Alberta, Calgary and Montana -- relied upon dozens of high-tech animal tagging devices and motion sensor-activated cameras to study human, animal and plant distribution throughout southwest Alberta. The research area stretched from in the northeast, through to the provincial borders with in the west and the US-Canada border in the south. "We painstakingly monitored wolves, elk, cattle and plant species, as well as humans for five years. We evaluated how these species interacted across the landscape and ultimately found that humans dominated the ecosystem," Muhly says.


"In particular, we found that forage-mediated effects of humans (bottom-up effects) were more influential than predator-mediated effects in the food chain. The presence of humans was most correlated with occurrence of forage (plants). Elk and cattle distribution correlated closely with forage, and the distribution of wolves matched that of the elk and cattle they view as potential prey.


"Our results contrast with research conducted in protected areas that suggested food chains are primarily regulated by predators. Rather, we found that humans influenced other species in the food chain in a number of direct and indirect ways, thus overshadowing top-down and bottom-up effects," Muhly says.