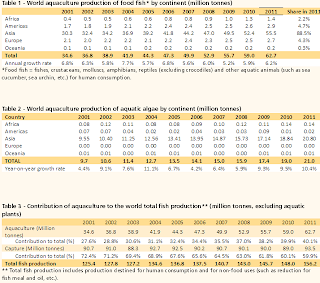 If you inspect these charts, the one thing that is clear is that the wild catch is not growing at all and is stable at 90 million tons.  A fishery collapse or two and it is heading down.  At the same time aquaculture innovation is continuing apace and will soon displace even the tuna with an equivalent.

Thus it is apparent that aquaculture will surely surpass the wild catch in 2021.  In time I also expect that aquaculture economics will also force the wild fishery to contract and rationalize.  In fact that has been happening in many subtle ways.

In the long term, all fisheries will be successfully managed in an environmentally competent way.  Do not presume that nature had it right either all the time.  It really has a bright future in all aspects however lousy a particular practice may still be.

World fish production is expected to rise to 172 million tons in 2021 and aquaculture (fish farming) will provide about half of that amount.
Posted by arclein at 12:00 AM

Very nice article.. I think the aquaculture must be developed with a better strategy to make it a profitable business for everyone.