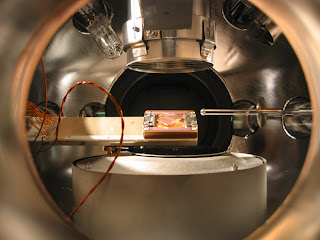 It is nice to know that we have a theory of time? Yet a crystal that is apparently stable at the ground state is interesting as it is neither releasing or absorbing energy. It may actually be an excellent tool to test out ideas of time. This is not so much perpetual motion as frictionless load free rotation. It is certainly not free energy.

I wonder how it might behave in low gravity.

I have not found anyone doing high level research on gravity and time using a pure empirical approach without the built in assumptions of our theory. If you are aware of such I could use a pointer.

In February 2012, the Nobel Prize-winning physicist Frank Wilczek decided to go public with a strange and, he worried, somewhat embarrassing idea. Impossible as it seemed, Wilczek had developed an apparent proof of “time crystals” — physical structures that move in a repeating pattern, like minute hands rounding clocks, without expending energy or ever winding down. Unlike clocks or any other known objects, time crystals derive their movement not from stored energy but from a break in the symmetry of time, enabling a special form of perpetual motion.

“Most research in physics is continuations of things that have gone before,” said Wilczek, a professor at the Massachusetts Institute of Technology. This, he said, was “kind of outside the box.”

Wilczek’s idea met with a muted response from physicists. Here was a brilliant professor known for developing exotic theories that later entered the mainstream, including the existence of particles called axions and anyons, and discovering a property of nuclear forces known as asymptotic freedom (for which he shared the Nobel Prize in physics in 2004). But perpetual motion, deemed impossible by the fundamental laws of physics, was hard to swallow. Did the work constitute a major breakthrough or faulty logic? Jakub Zakrzewski, a professor of physics and head of atomic optics at Jagiellonian University in Poland who wrote a perspective on the research that accompanied Wilczek’s publication, says: “I simply don’t know.”

Now, a technological advance has made it possible for physicists to test the idea. They plan to build a time crystal, not in the hope that this perpetuum mobile will generate an endless supply of energy (as inventors have striven in vain to do for more than a thousand years) but that it will yield a better theory of time itself.

When matter crystallizes, its atoms spontaneously organize themselves into the rows, columns and stacks of a three-dimensional lattice. An atom occupies each “lattice point,” but the balance of forces between the atoms prevents them from inhabiting the space between. Because the atoms suddenly have a discrete, rather than continuous, set of choices for where to exist, crystals are said to break the spatial symmetry of nature — the usual rule that all places in space are equivalent. But what about the temporal symmetry of nature — the rule that stable objects stay the same throughout time?

Wilczek mulled over the possibility for months. Eventually, his equations indicated that atoms could indeed form a regularly repeating lattice in time, returning to their initial arrangement only after discrete (rather than continuous) intervals, thereby breaking time symmetry. Without consuming or producing energy, time crystals would be stable, in what physicists call their “ground state,” despite cyclical variations in structure that scientists say can be interpreted as perpetual motion.

“For a physicist, this is really a crazy concept to think of a ground state which is time-dependent,” said Hartmut Häffner, a quantum physicist at the University of California at Berkeley. “The definition of a ground state is that this is energy-zero. But if the state is time-dependent, that implies that the energy changes or something is changing. Something is moving around.”

How can something move, and keep moving forever, without expending energy? It seemed an absurd idea — a major break from the accepted laws of physics. But Wilczek’s papers on quantum and classical time crystals (the latter co-authored by Alfred Shapere of the University of Kentucky) survived a panel of expert reviewers and were published in Physical Review Letters in October 2012. Wilczek didn’t claim to know whether objects that break the symmetry of time exist in nature, but he wanted experimentalists to try to make one.

“It’s like you draw targets and wait for arrows to hit them,” he said. “If there’s no logical barrier to this behavior being realized, then I expect it will be realized.”

In June, a group of physicists led by Xiang Zhang, a nanoengineer at Berkeley, and Tongcang Li, a physicist and postdoctoral researcher in Zhang’s group, proposed creating a time crystal in the form of a persistently rotating ring of charged atoms, or ions. (Li said he had been contemplating the idea before reading Wilczek’s papers.) The group’s article was published with Wilczek’s in Physical Review Letters.

Since then, a single critic — Patrick Bruno, a theoretical physicist at the European Synchrotron Radiation Facility in France — has voiced dissent in the academic literature. Bruno thinks Wilczek and company mistakenly identified time-dependent behavior of objects in excited energetic states, rather than their ground states. There is nothing surprising about objects with surplus energy moving in a cyclical fashion, with the motion decaying as the energy dissipates. To be a time crystal, an object must exhibit perpetual motion in its ground state.

Bruno’s comment and Wilczek’s reply appeared in Physical Review Letters in March 2013. Bruno demonstrated that a lower energy state is possible in a model system that Wilczek had proposed as a hypothetical example of a quantum time crystal. Wilczek said that although the example is not a time crystal, he doesn’t think the error “calls into question the basic concepts.”

“I proved that example is not correct,” Bruno said. “But I have no general proof — so far, at least.”