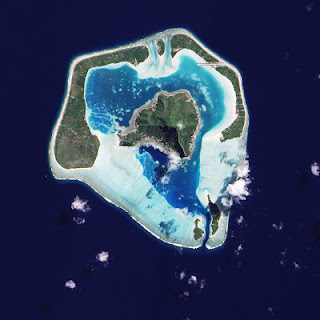 It amazes me that folks are still pitching the idea that we will see radical sea level shifts over the next two hundred years. That is complete nonsense. It accepts the worse case scenario of our climate modeling regime gone mad. It will still happen in geological time as we swing through our orbit about Sirius. This is of course not understood at all but is a surprisingly real conjecture.

Better though this item cleans up some unfinished business for myself related to the serious release of water since the last Ice Age.

I would like to see coral reefs established artificially in the natural Goldilocks zone worldwide. This is easily done by simply placing matrices of cheap mesh on the sea bed and maintaining a low charge for a few months. This establishes a working bed for the coral and shellfish to attach to and start the process of reef building.

Using that method, it is no trick to grow barrier reefs everywhere coral at least is able to prosper.

A satellite image of Maupiti, one of the Society Islands, which is on its way to becoming an atoll. Submerged reef appears in pale blue

The three different formations of South Pacific coral-reef islands have long fascinated geologists. Tahiti’s coral forms a “fringing” reef, a shelf growing close to the island’s shore. The “barrier” reefs of Bora Bora are separated from the main island by a calm lagoon. Finally, an “atoll,” such as Manuae, appears as a ring of coral enclosing a lagoon with no island at its center.

The question of how reefs develop into these shapes over evolutionary time produced an enduring conflict between two hypotheses, one from English naturalist Charles Darwin and the other from geologist Reginald Daly. But in a paper recently published in the journal Geology, researchers at MIT and Woods Hole Oceanographic Institution (WHOI) use modern measurements and computer modeling to resolve this old conundrum.


Darwin proposed that fringing reefs, barrier reefs and atolls reflect different stages in a dramatic process that occurs as an island sinks into the ocean floor — the ultimate fate of all of the world’s volcanic ocean islands. As young volcanic rock cools and is carried away from a volcanic “hot spot” by the movement of tectonic plates, an island sinks as much as a few millimeters per year.


As the island sinks, resident coral reefs on the island flanks grow upward toward the sea surface. The living coral organisms up top, and their symbiotic algae, get enough sunlight to keep pace with the sinking of the island. As the coral grows upward and the island sinks down, a fringing reef progresses to a barrier reef, and eventually to a signature atoll.


However, Darwin’s reef theory can’t explain the trajectories of all volcanic ocean-island systems, as MIT/WHOI graduate student Michael Toomey and collaborators Taylor Perron, the Cecil and Ida Green Assistant Professor of Geology at MIT, and Andrew Ashton, a coastal geomorphologist at WHOI, discovered.


The Hawaiian Islands, they realized, show a different kind of progression: For example, the researchers found fringing reef where they expected to find no reef development and drowned barrier reefs where they expected living barrier reefs. “Those islands are just not sinking into atolls like the Society Islands,” Toomey says, “so we wanted to develop a model to explain these differences.”


They turned to the theory of Darwin’s challenger, Reginald Daly, who argued that sea-level cycles, not island subsidence, were the key to understanding coral formations. Sea level drops during ice ages, when water becomes locked in ice sheets on land, and then rises between glaciations as the ice melts. Daly suggested that exposure to increased wave energy during sea-level drops would erode an island away; then, as sea level rises, the coral would regrow on submerged island platforms.


The researchers decided to consider the ideas of both Darwin and Daly, creating a computer model focusing on the relationships among coral growth, sunlight availability, water depth and erosion. In combination with island subsidence rates, the model calculates how a coral reef develops as sea level varies over hundreds of thousands of years.


The team can model Darwin’s scenario by including island subsidence but no glacial sea-level cycles. As expected, the configuration that emerges does not resemble current reef formations. So, they added in a sea-level history based on geological evidence and paleoclimate data, which allows the model to account for a sea level oscillating between the present level and 120 meters below that level every 100,000 years.


This time, the model, running a course of four glacial cycles (400,000 years) into the past, yielded a coral-reef distribution that matched up well with the real-world observations. The barrier reefs, drowned barrier reefs, and other forms were all in the correct places on the map. “What this shows,” Perron says, “is that while island subsidence is important, as Darwin suggested, sea-level oscillations are also important for determining the distribution of reef types around the world.”


This geological time machine is sophisticated enough to explain why the Society Islands follow the Darwin progression but others do not. According to the simulations without sea-level oscillations, most of the environment would be likely to make the Darwin progression. But when the sea-level oscillations are included, Ashton says, “It turns out there is only a little ‘Goldilocks’ zone, a narrow range of subsidence and reef-accretion rates, in which you can get that progression.”


Intriguingly, the parameters the model needed to create that tiny zone of Darwin progression match up with Tahiti’s actual growth and subsidence rates. That is, Tahiti has subsided just slowly enough for the deep lagoon to develop over the last few glacial cycles without drowning permanently.


By contrast, Hawaii is sinking so quickly (more than 2 millimeters per year) that it will never see Darwin’s configuration. All it can do is form a little reef terrace every time the sea level falls to its lowest point. When sea level rises as ice sheets melt at the end of each glacial period, the reef drowns and stays drowned.


This model’s big revelation is that coral reefs are very sensitive to sea-level changes. This is useful information, notes Peter Burgess, a professor and chair of earth sciences at Royal Holloway, University of London, because using this model to explore different scenarios of real-world reef formation can help produce a record of how sea level oscillated over long time scales. “It’s helpful to know how fast the sea level has changed in the past,” he says, “because there is a high probability it will change rapidly in the next couple hundred years, and we’d like to understand how that change might happen.”


The research was supported by the Andrew W. Mellon Foundation and the Ralph E. Hall Endowed Funds for Innovative Research through the Woods Hole Oceanographic Institution.