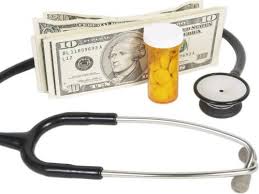 In a rational world, this would be described as criminal enterprise rigged to exploit the desperate who inevitable need service immediately by the time they activate the service. In fact this report is so insane, I do not know how a single American can still stand up to defend it. As soon defend Hitler’s special treatment of the Jews.

Even better it practices genocide on those who cannot afford to access the system by outright gambling with their lives.

I would generate a petition outlining this position properly and get every elected official to sign of on his endorsement so every voter does know who supports the continuance of this galloping criminal enterprise. Make them pay for it.

Anatomy of the World's Most Insane Health Care Billing System

A few years ago, I went to the doctor for a simple procedure. I had high-deductible health insurance and would be paying for the procedure out of pocket.

Before heading in I asked the receptionist what I thought was a simple question: "How much is this going to cost?"

She had no idea. And she had no way to check. She looked at me like it was an unreasonable question. A manager contacted a third-party billing agency to get me a quote, which ended up being nothing close to what I actually paid in the end.

Economic models assume participants have perfect information. In reality, they often have no information whatsoever.

I thought this was a glaring example of how screwy health care pricing is. But I had no idea.

A kidney and urinary tract infection faces a $132,569 bill at Crozer Chester Medical Center in Pennsylvania, but $6,224 at Wyoming County Community Hospital.

Those are just a few examples I pulled out of a massive database released by the Centers for Medicare and Medicaid Services last week. The group spilled the beans on what 3,000 hospitals charge for 100 of the most common medical procedures. It then compares those "chargemaster" prices to what Medicare actually paid for the treatments, based on hospital-specific estimates of the treatment's cost, including administrative overhead.

The report doesn't contain perhaps the most important metric -- outcomes and quality of procedures performed. Teaching hospitals and hospitals that receive an influx of seriously ill patient transfers from other hospitals will also have higher-than-average costs.

The second takeaway is that the gap between what hospitals charge for procedures and what Medicare actually pays for those procedures is off the charts. Of the 100 procedures tracked in the database, the average difference between "average charges" and "average payments" is -- I'm not making this up – 72%.

Go back to my pacemaker example above. Phoenixville Hospital may charge $211,534 for a pacemaker implant, but Medicare pays the hospital $17,835 for the procedure. Unitown Hospital bills $19,747 for the treatment, and is reimbursed $15,281. What starts out as a five-fold price discrepancy shrinks to a 14% difference in the end.

Steven Brill, a journalist who wrote an eye-opening cover story for TIME earlier this year exposing discrepancies in health-care bill prices that paved the way for the data's release,wrote last week:

The hospital lobby, led by the American Hospital Association, is going to howl that publication of these chargemaster prices is unfair. Only a minority of patients are actually asked to pay those amounts, it will argue. Insurance companies, which cover the majority of patients, receive huge discounts off the list prices, though they pay substantially more than Medicare does.

True, but that doesn't settle the matter. It actually highlights some of the deepest problems. Those "minority of patients" are no small group; they're the estimated 48 million Americans without health insurance. For medical providers to say that chargemaster prices don't reflect the true cost of care is to admit that some of the most financially vulnerable Americans may be being billed absurdly inflated prices. It's ironic, but some of the greatest benefits to having health insurance isn't necessarily the insurance coverage, but the price-negotiating power that insurance companies strike with care providers.

That would be absurd. No one would put up with it.

But it's how our health care system works.