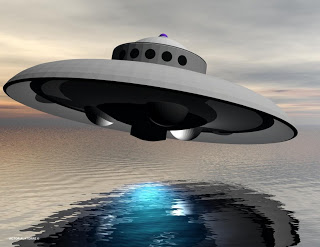 The sheer variety of shape and coloration is now surprising and not particularly commented on before. More important is that 2012 saw a sharp increase in reported sightings. I have to think that at least several other sightings occurred for everyone actually reported. From my own experience I have received several excellent reports from friends who realized that they could trust me after many unrelated conversations.

Not everybody has a personal story but from the subset that I interact with, I would say that ten percent of the population has observed and perhaps a third understood that it was a UFO. This is really pretty huge and tells us that most observers make no effort to share their information even when it becomes pretty easy.

The amorphous shape changing UFO's are plausibly massive methane bubble forming slime mold denizens of the stratosphere and upper atmosphere who catch the sunlight and are moving about with the high speed winds. If that turns out to be actually true, I will be pleasantly surprised. At least I have one natural explanation for one subset of observations. These creatures must also operate much lower in the atmosphere but simply remain unseen.

What has become clearly apparent as years progress on this issue is that the operators of these craft have become pretty slack in terms of showing off their capability. Real traffic remains heavy and what we see are the few that are not stealthed.

This week, Winnipeg-based Ufology Research published the results of its annual survey and the group's findings are quite interesting. According to the survey, more UFOs have been spotted in the province of Manitoba during 2012 than during any year in recorded history. There were 124 sightings in 2012, compared to 81 in the previous year. The last time more than 100 sightings have occurred in the course of a single year was 2004.


Similarly, record numbers of UFO sightings have been reported in every other province, with the exception of Prince Edward Island and Saskatchewan. In total, 1,981 unexplained flying objects were reported in Canada in 2012, easily exceeding the previous record of 1,004 in 2008. About 40% of last year's reported sightings took place in Ontario.


According to Ufology Research director Chris Rutkowski, these reports described UFOs of every possible shape, size, and color:


"Octagon shape things [and] things that were amorphous, without any defined shapes, like blobs moving through the sky. Some of them [were] actually changing shape as they flew. Those ones are really puzzling.”


Reports indicate that the coloration of the mysterious objects ranged from purple to pink, red, silver, green, orange, and virtually every color in between.


The group's report concluded: "The continued reporting of UFOs by the public and the yearly increase in numbers of UFO reports suggests a need for further examination of the phenomenon by social, medical and/or physical scientists."


While further examination may be necessary, it appears that any such examinations will rest on the shoulders of civilians. Documents obtained by CBC News earlier this year under the Access to Information Act, the Canadian government has decided to give up cataloging and investigating UFO sightings.