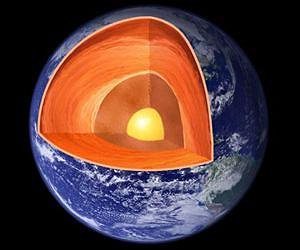 It may be possible to map this effect in other recycled volcanic rocks worldwide and give us an indirect way to see the ancient past. At least we now know that it is possible.

Slowly but surely we are advancing our knowledge of geological history and piecing together an awesome history.

At the same time, we can look across at Venus and see another prospective planet to terraform also. The surface rock temperature remains at over 600C and will remain there until we cause the planet to be bombarded with comets that pack plenty of of water and carbon.

That would cause the temperature to quickly collapse and set the stage for a repeat of earth's history.

Scientists have long believed that lava erupted from certain oceanic volcanoes contains materials from the early Earth's crust. But decisive evidence for this phenomenon has proven elusive.

New research from a team including Carnegie's Erik Hauri demonstrates that oceanic volcanic rocks contain samples of recycled crust dating back to the Archean era 2.5 billion years ago. Their work is published in Nature.

Oceanic crust sinks into the Earth's mantle at so-called subduction zones, where two plates come together. Much of what happens to the crust during this journey is unknown. Model-dependent studies for how long subducted material can exist in the mantle are uncertain and evidence of very old crust returning to Earth's surface via upwellings of magma has not been found until now.

The research team studied volcanic rocks from the island of Mangaia in Polynesia's Cook Islands that contain iron sulfide inclusions within crystals. In-depth analysis of the chemical makeup of these samples yielded interesting results.

The research focused on isotopes of the element sulfur. (Isotopes are atoms of the same element with different numbers of neutrons.) The measurements, conducted by graduate student Rita Cabral, looked at three of the four naturally occurring isotopes of sulfur--isotopic masses 32, 33, and 34.

The sulfur-33 isotopes showed evidence of a chemical interaction with UV radiation that stopped occurring in Earth's atmosphere about 2.45 billion years ago.

This indicates that the sulfur comes from a deep mantle reservoir containing crustal material subducted before the Great Oxidation Event and preserved for over half the age of the Earth.

"These measurements place the first firm age estimates of recycled material in oceanic hotspots," Hauri said. "They confirm the cycling of sulfur from the atmosphere and oceans into mantle and ultimately back to the surface," Hauri said.