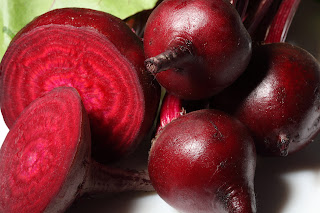 Specific experiments have pretty well spelled it out. Raw vegetable release nitrates directly into the bloodstream causing a strong downward adjustment in blood pressure. Beet juice appears to be particularly strong in terms of this effect.

Obviously many other factors are also brought to bear here that matter also that remain often unidentified. Yet the nitrate cycle is well known and fundamental.

We already know that a vegan diet is wonderfully successful. What should also be clear is that the vegan portion of your diet needs to be there even if the rest is not. I am not sold on dietary exclusivity in any way but I am certainly sold on the need for a large vegan component.

I should mention that juicing is a powerful tool in dealing with raw vegetables and it demands a powerful juicer. That is expensive but critical.

It's not a new Big Pharma drug and it comes free of side effects. Instead of medication, it's simply a small amount of beet juice.


Researchers found that people with hypertension, the medical term for high blood pressure, who drank about eight ounces of beet juice daily had a decrease in blood pressure of about 10 mm Hg. The scientists explained in their paper that the amount of juice from beets (known as beetroots in Europe) consumed contains 0.2g of dietary nitrate -- that's about the same amount of nitrate that's found in a large bowl of lettuce or approximately two beets.


So what does nitrate have to do with blood pressure? It turns out that after it's consumed, nitrate is converted in the body to a chemical called nitrite and then to the gas nitric oxide. Once in the bloodstream, nitric oxide widens blood vessels, aids blood flow and lowers blood pressure.

[ all of a sudden we have a clear explanation for the effectiveness of the vegan diet. This is a nutrient easily washed out of cooked food or at least reactive - arclein]


"Our hope is that increasing one's intake of vegetables with a high dietary nitrate content, such as green leafy vegetables or beetroot, might be a lifestyle approach that one could easily employ to improve cardiovascular health," said Amrita Ahluwalia, Ph.D., lead author of the study and a professor of vascular pharmacology at The Barts and The London Medical School in London.


The study involved eight women and seven men who had a systolic blood pressure between 140 to 159 millimeters of mercury (mm Hg), a measurement indicating they had high blood pressure. Other than hypertension, none had other medical complications and they weren't taking blood pressure medication. The research subjects drank 250 mL of beet juice or water containing a low amount of nitrate. Then their blood pressure was monitored over the next 24 hours.


Compared with the group drinking water with just a bit of nitrate, the research subjects who drank beet juice were found to have reduced systolic and diastolic blood pressure. This impact on blood pressure continued even after nitrite circulating in the blood had returned to their previous levels before the juice was consumed. In fact, the positive effect was most pronounced three to six hours after drinking the juice - but it was still present even a day later.


In the United States, more than 77 million adults have diagnosed hypertension -- and high blood pressure is a major risk factor for heart attacks and stroke. Eating vegetables rich in dietary nitrate and other critical nutrients may be an accessible and inexpensive way to manage blood pressure, Dr. Ahluwalia said in a media statement.


This isn't the only research that shows beets have health-protective properties. NaturalNews previously reported that a study published in Nitric Oxide: Biology and Chemistry, the peer-reviewed journal of the Nitric Oxide Society, by scientists at Wake Forest University's Translational Science Center found that beets increase blood flow and help oxygen get specifically to places in body that are lacking oxygen -- including the brain -- and may help people with dementia.