Breaking up the Banks 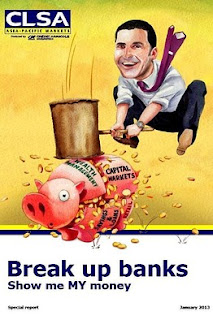 That is the issue is it not? The US government has had a full century of effective experience in the art of breaking up large risky corporations as any sane government must. Instead we actually got a consolidation instead. Quit bluntly all the too large to fail banks should have been instantly nationalized and sold of piecemeal with financing to the myriad smaller domestic banks.

The lesson would never have been forgotten because all the perps would have lost all their capital.

Instead we have the present nonsense in which recovery is achieved by embarking on the same road. Since recovery is now underway after its four year gap, it will take about seven to eight years before we have another nasty round. This will take us to 2020.

Unless of course the next president is economically savvy and pushes through the reforms needed to protect everyone. The current one has lost us four years out of the lives of ten percent of the work force. The recovery we have now is happening naturally because all the problems were squeezed out of the system and consumer lending is now expanding.

There are plenty of flaws in the financial system, but most are not crisis producing and never will be. This flaw is and will be unless it is forcibly broken up without going through a real bankruptcy.

Think of something, the biggest player can lay of the risk of a gamed bet or derivative onto the shoulders of his close competitors and trip a situation in which he holds all the marbles and why will he not do so? We have a situation in which everyone is a potential rogue trader.

If the Fed Knows Banks Are Too Big, Why Doesn’t It Make Them Smaller?

On May 2, The Wall Street Journal reported that regulators were pushing to require “very large banks to hold higher levels of capital,” including minimum levels of unsecured long-term debt, as part of an effort “to force banks to shrink voluntarily by making it expensive and onerous to be big and complex.”

The article quoted Fed Governor Jeremy Stein, who said, “If after some time it hasnot delivered much of a change in the size and complexity of the largest of banks, one might conclude that the implicit tax was too small, and should be ratcheted up” (emphasis added).

“‘The important question is not whether capital requirements for large banking firms need to be stronger than those included in Basel III and the agreement on capital surcharges, but how to make them so,’ said Mr. Tarullo, adding later that even with those measures in place it ‘would leave more too-big-to-fail risk than I think is prudent.‘”

“Mr. Bernanke said the Fed could push banks to maintain a higher leverage ratio, hold certain types of debt favored by regulators, or other steps to give the largest firms a ‘strong incentive to reduce their size, complexity, interconnectedness.’

“The Fed chairman acknowledged growing concerns that some financial companies remain so big and complex the government would have to step in to prevent their collapseand said more needs to be done to eliminate that risk.”

It’s important to note exactly what Stein, Tarullo, and Bernanke are all saying.

What’s remarkable about this? These three men—probably the three most important on the Board of Governors when it comes to systemic risk regulation (as opposed to monetary policy, for example)—all say that they know that the megabanks are too big and complex. They all say that accurate pricing of subsidies and externalities is not an end in itself.* They all say that the goal is smaller, less complex banks.

They also betray a frightening naivete regarding corporate governance. The theory is that higher capital requirements, for example, will lower banks’ profits, which will upset shareholders, who will eventually force the board of directors to eventually convince the CEO to break up his empire. This scenario, unfortunately, depends on the premise that American corporations are run for the benefit of their shareholders, which is only roughly true, and even that often requires long, expensive, and messy shareholder activist campaigns.

Instead, there’s an obvious solution: rules that limit the size and scope of financial institutions. But Bernanke has ruled out “arbitrary” size caps in favor of his cute regulatory dial-tweaking.

Again, Bernanke’s position might be defensible if he wasn’t already sure that today’s banks are too big and complex. Then it might make sense to tweak the incentives and see how the market reacts. But if he knows they are too big and complex, he should eliminate that risk in the simplest, most direct way possible. If he’s not sure how much smaller and simpler banks need to be, he can do it in steps: set one set of size and scope limits, see what he thinks about the outcome, and then set another set of limits if he’s still unhappy.

To use a crude analogy, let’s say we’re concerned about guns on airplanes. Ben Bernanke thinks, like I do, that guns on planes present an unacceptable risk to the safety of air travel. But his approach is to charge a $100 fee for anyone who wants to bring a gun onto a plane. If people keep bringing guns on board, he’ll raise the fee to $200, then $300, and so on until people stop. The sensible, obvious solution is to just ban guns on planes. But that would be “arbitrary.”

* It is theoretically plausible that one should simply price the subsidies and externalities and then let the market determine whether big banks provide enough societal benefit to offset the costs they impose on the rest of us. But that is not what Stein, Tarullo, and Bernanke are saying.