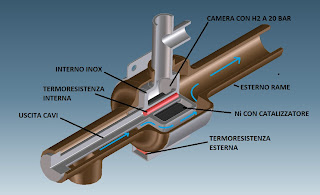 Remember Rossi's and Focardi's ECAT technology? The noise has died down and excess optimism has now withered away. Today though we have this excellent independent test that clearly shows that the device is really working. I include Jed's review which makes the important point regarding the quality of the work done. Notice just now long it took to do this right.

The take home is that the ECAT came through rigorous and skilled testing with flying colors. We have a real heat source that can be used safely. Theory becomes irrelevant simply because it can be delivered. Recall our energy equations are a mere three centuries old while the water wheel is as many millennia old. This is a very hot brick and it produces heat well above break even.

Better yet, we still have no idea just how long it can last. My guess is that it will be years if not decades. We now have an over unity heat source that may not be as easy to turn on and off as a natural gas turbine but will certainly produce a good grade of steam.

From the get go, I would tackle green houses in particular.

I just read this paper for the third time. This is a gem. These people think and write like engineers rather than scientists. That is a complement coming from me. They dot every i and cross every t. I can't think of a single thing I wish they had checked but did not.

In ever instance, their assumptions are conservative. Where there is any chance of mismeasuring something, they assume the lowest possible value for output, and the highest value for input. They assume emissivity is 1 even though it is obviously lower (and therefore output is higher). The add in every possible source of input, whereas any factor that might increase output but which cannot be measured exactly is ignored. For example, they know that emissivity from the sides of the cylinder close to 90 degrees away from the camera is undermeasured (because it is at an angle), but rather than try to take that into account, they do the calculation as if all surfaces are at 0 degrees, flat in front of the camera. In the first set of tests they know that the support frame blocks the IR camera partly, casting a shadow and reducing output, but they do not try to take than into account.

Furthermore, this is a pure black box test, exactly what the skeptics and others have been crying out for. They make no assumptions about the nature of the reaction or the content of the cylinder. They make no adjustments for it; the heat is measured the same way you would measure an electrically heated cylinder or a cylinder with a gas flame inside it. It is hands-off in the literal sense, with only the thermocouples touching the cell, and the rest at a distance, including the clamp on ammeter which placed below the power supply. You do not have to know anything about the reaction to be sure these measurements are right. There is nothing Rossi could possibly do to fool these instruments, which the authors brought with them. They left a video camera on the instruments at all times to ensure there was no hanky-panky. They wrote:

They estimate the extent to which the heat exceeds the limits of chemistry by both the mass of the cell and the volume of the cell. In the first test, they use the entire weight of the inside cell as the starting point, rather than just the powder, as if stainless steel might be the reactant. In the second test they determine that the powder weighs ~0.3 g but they round that up to 1 g.

They use Martin Fleischmann's favorite method of looking at the heat decay curves when the power cycles off. Plot 5 clearly shows that the heat does not decay according to Newton's law of cooling. There must be a heat producing reaction in addition to the electric heater.