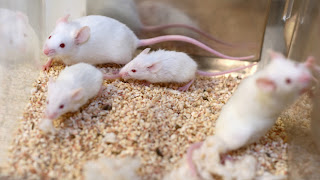 This certainly infers that our generational experiment with single parent families needs to be reviewed and carefully studied as to the presence of deleterious biological impact.  The implied assumption has been that there is no problem.

Now we suddenly know that this is not quite true.

I would go further.  We need to rethink how we organize our civilization to optimize child nurturing even when parent hate each other or are simply not there.  If that is not important, then what is?

New research out of the suggests children with two parents instead of one could have healthier brains later in life.

Scientists with the Hotchkiss Brain Institute divided mice into different groups of pups raised by different combinations of parents, then waited until the pups reached adulthood to look for an impact on brain cell production.

"When the babies became older, they had two to three times more brain cell production," said Samuel Weiss, the senior author of the study.

"The level of adult brain cell production is actually determined early on in development, and the numbers of parents could actually determine that, based on the amount of attention that they can give for their babies," he said.

Children who are brought up by two parents grow up to be cleverer than those raised by just one person, new research suggests.

Being with both parents in the earliest years of life leads to a child developing more brain cells, the scientists believe.

However, the benefits vary between the sexes.

Being brought up by both parents causes boys to have better memory and learning functions.

By contrast, it causes girls to develop improved motor co-ordination and sociability.

It is believed that babies with two parents tend to get more attention and more stability, and that they are less likely to suffer emotional distress in the first years of life.

The researchers from the Hotchkiss Brain Institute (HBI) of Calgary University, in Canada, studied mice and experimented by creating one parent and two parent family groups.

They then measured the offspring’s brain cell development from birth to adulthood.

Adult mice with the highest number of brain cells turned out to be those who had been brought up by two parents rather than one.

Two in three new mums feel 'let down' by the NHS: Shortage of midwives means some women get more postnatal visits than others

As babies they had received more attention and more nursing as both parents took turns to lick and tend to their youngsters, said HBI director, Dr Samuel Weiss.

As a result, the babies with two parents are less likely to suffer early life trauma which can have a massive impact on how their brains develop in later life, the research shows.

However, what did surprise the researchers is that female babies who grew up with both parents turned out to be good single mothers, as if good parenting was passed on.

‘Surprisingly, the advantages of dual parenting were also passed along when these two groups reproduced, even if their offspring were raised by one female.

‘The advantages of dual parenting were thus passed along to the next generation.’

Although the experiment was conducted on mice, many of the same principles of how early life events can influence growing up are relevant to humans too, the report added.

‘It is possible that similar effects could be seen in other mammals, such as humans.’
Posted by arclein at 12:00 AM

Were any studies done of mice raised with three, four or more "parents"?