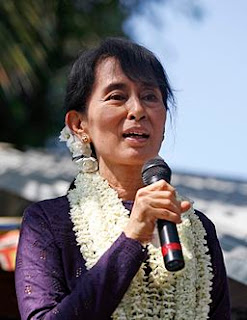 As outsiders, we quickly forget and about that other time warp country of .  So a little interpretation is welcome and a reminder that the future there is optimistic as least as it has broken stasis.  It can degenerate into lawlessness if the military were to disintegrate, but that looks unlikely.

The foolish usually fail to understand that the military in a backward country is the only real organizing force available.    Thus it becomes the natural partner for major modernizing investment.  It enemy is corruption, but that is usually far worse at the political and private level.

So the lady was offered a practical solution in which she took on the public relations part of the job and the military provided the resources to begin modernization in .  Give them a decade and the momentum will be unstoppable and impressive.

It is still hard to say all’s well that ends well but it is certainly a sane start to managed revolution whose shape is already well understood.  It certainly beats the .

The past few months haven’t been easy for “the Lady,” as Daw Aung San Suu Kyi has long been known in . With the opening up of the country, Suu Kyi, as leader of the opposition, has had to enter the nitty-gritty world of practical politics. She never had to do this in her role—at once real and symbolic—as flower-festooned Nobelist icon standing up to a “brutish” military junta and gracefully enduring years of house arrest among other indignities. Many of her supporters at home and abroad are now disappointed by her decision to engage the former generals who control , and the Suu Kyi brand is losing its lustre. Her silence on the government’s policy regarding Muslim Rohingyas in western and the Christian Kachins in the far north has made her the target of criticism both within the country and without.

Funny, though—the more Suu Kyi gets hammered by the bien-pensant crowd, the more I like and admire her. I’ve been traveling to for years—more than a dozen times since 1993, mainly for research—and in the past had always been somewhat ambivalent about her. Clearly she was brave, and she certainly rose to the occasion in 1988, but she had her faults. Her political writings were unimpressive, for example, and her academic career mediocre. In 1985, 23 years into the reign of the generals, she wrote Let’s Visit , a breezy little children’s book. And I could even understand why the generals and a significant number of others were a bit suspicious about her intentions in the late 80s. After all, Suu Kyi, the daughter of the country’s “George Washington,” had married a Brit—a citizen of the detested ex-colonial power—and moved to the in 1972. In on a private visit at a time of political crisis in 1988, she was catapulted into leading the opposition by media-savvy student dissenters and their allies, if only to stick it to the generals, who still venerated her martyred father, General Aung San.

And even after her years of on-and-off house arrest, I remained ambivalent. I realised that the military, for better or worse, was basically the only force holding together the ethnically divided country, and Suu Kyi’s support for sanctions and tourist boycotts struck me, at the very least, as questionable. Over the years I met many people in the country, both Burmese and ethnic minorities, who opposed the generals and Suu Kyi’s overly moralistic approach to international relations. Many of these people were poor or working class, and believed that Suu Kyi’s policy preferences hurt their chances to benefit a bit from imports, foreign investment and tourist dollars. Some were young and felt that this basically supplemented the generals’ disastrous autarkic economic policies, rendering the young even more isolated from the world. And some were small-business types, who couldn’t make a go of it without foreign exchange and spare parts. I vividly remember the dashed hopes of many of these people when virtually no tourists showed up in in 1996, the year of the generals’ failed “Visit ” campaign. I made two trips to Burma that year and left each time with half a dozen redundant Shan shoulder bags, which had been intended as ”gifts” for tourists who failed to make the scene.

But times have changed, and suddenly is hot. Hopefully, the political opening of the last two years will do more than make the country safe for intrepid travellers. The Lady is serving the country better than ever by working with President U Thein Sein and his allies, and thus by not making the search for the perfect the enemy of the good. If Burma has a chance at long last to begin to reach its developmental promise—in the early 1960s the country, along with Ceylon (Sri Lanka) and the Philippines, was viewed as a potential high flier—it will do so with the support of the military. There are recent analogues in Asia: development in both and was facilitated by modernising militaries. Let’s hope for a similar path in , one that is only possible if Aung San Suu Kyi continues her courageous working partnership with another brave individual: U Thein Sein.