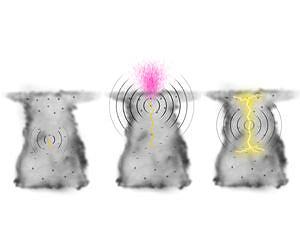 Does anyone really think that we have lightening figured out? Besides gamma rays and errant electrons we also have stripped atoms accumulating and moving around to form ball lightening also. In fact a channel may well be formed by stripped ions. The ball lightening was only recently properly described.

A good explanation may be that we are actually seeing a heat effect penetrating the air mass as the surplus electrons drill toward the ground. Once the ions are hot enough the electrons are able to cascade easily through the mass of ions.

It is still all pretty dramatic.

Three images, left to right, of the same thundercloud depict a less-than-10-milliseconds-long sequence of events: (left) formation within the cloud of a small channel, or 'leader,' of electrical conductivity (yellow line) with weak emission of radio signals (ripples), to (middle) a burst of both dark lightning (pink) and radio waves (larger ripples), to (right) a discharge of bright lightning and more radio waves. (Credit: Studio Gohde). For a larger version of this image please go here.


Researchers have identified a burst of high-energy radiation known as "dark lightning" immediately preceding a flash of ordinary lightning. The new finding provides observational evidence that the two phenomena are connected, although the exact nature of the relationship between ordinary bright lightning and the dark variety is still unclear, the scientists said.

"Our results indicate that both these phenomena, dark and bright lightning, are intrinsic processes in the discharge of lightning," said Nikolai Ostgaard, who is a space scientist at the University of Bergen in Norway and led the research team.

He and his collaborators describe their findings in an article recently accepted in Geophysical Research Letters -- a journal of the American Geophysical Union.

Dark lightning is a burst of gamma rays produced during thunderstorms by extremely fast moving electrons colliding with air molecules. Researchers refer to such a burst as a terrestrial gamma-ray flash.

Dark lightning is the most energetic radiation produced naturally on Earth, but was unknown before 1991. While scientists now know that dark lightning naturally occurs in thunderstorms, they do not know how frequently these flashes take place or whether visible lightning always accompanies them.

In 2006, two independent satellites -- one equipped with an optical detector and the other carrying a gamma ray detector -- coincidentally flew within 300 kilometers (190 miles) of a Venezuelan storm as a powerful lightning bolt exploded within a thundercloud. Scientists were unaware then that a weak flash of dark lightning had preceded the bright lightning.

But last year, Ostgaard and his colleagues discovered the previously unknown gamma ray burst while reprocessing the satellite data. "We developed a new, improved search algorithm...and identified more than twice as many terrestrial gamma flashes than originally reported," said Ostgaard. He and his team detected the gamma-ray flash and a discharge of radio waves immediately preceding the visible lightning.

"This observation was really lucky," Ostgaard said. "It was fortuitous that two independent satellites -- which are traveling at 7 kilometers per second (4.3 miles per second) -- passed right above the same thunderstorm right as the pulse occurred." A radio receiver located 3,000 kilometers (1,900 miles) away at Duke University in Durham, North Carolina detected the radio discharge.

The satellites' observations combined with radio-wave data provided the information that Ostgaard and his team used to reconstruct this ethereal electrical event, which lasted 300 milliseconds.

Ostgaard and his team suspect that the flash of dark lightning was triggered by the strong electric field that developed immediately before the visible lightning. This strong field created a cascade of electrons moving at close to the speed of light. When those relativistic electrons collided with air molecules, they generated gamma rays and lower energy electrons that were the main electric current carrier that produced the strong radio pulse before the visible lightning.

Dark and bright lightning may be intrinsic processes in the discharge of lightning, Ostgaard said, but he stressed that more research needs to be done to elucidate the link.

The European Space Agency is planning on launching the Atmospheric Space Interactions Monitor (ASIM) within the next three years, which will be able to better detect both dark and visible lightning from space, said Ostgaard, who is part of the team that is building the ASIM gamma-ray detector.

Dark lightning has remained a perplexing phenomenon due to scientific limitations and a dearth of measurements, Ostgaard explained.

"Dark lightning might be a natural process of lightning that we were completely unaware of before 1991," he noted. "But it is right above our heads, which makes it very fascinating."