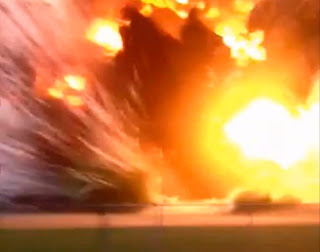 Every facility is perfectly safe until something goes bang. That unfortunate day is a simple function of probability and time. My real point is that you can truly measure the risk and you can license containment for starters.

Better yet you can charge a surcharge on critical chemicals based on its containment history and include imports to impose our standards overseas.

Everything in the Texas blast was safe provided a proper blast berm was in place. You can not stop accidents, but you can certainly mitigate their effects rather well. We have been doing this with gun powder for centuries already.

People will still die, but that is the nature of an accident. What is not acceptable is not preparing for the inevitable. Here we have one more dance with the regulators and a gunslingers attitude to the risk itself.

In July 2012, three Republican senators and one Democratic senator wrote a letter to Lisa Jackson, the Environmental Protection Agency's (EPA) top administrator at the time, requesting that the agency reject a proposal to strengthen safety measures at facilities that hold dangerous chemicals.

Sen. David Vitter (R-Louisiana), Sen. James Inhofe (R-Oklahoma), Sen. Mary Landrieu (D-Louisiana) and Sen. Susan Collins (R-Maine) asked the EPA to reject a 2012 request from a federal advisory committee to revisit the proposal and "reduce or eliminate ... catastrophic risks" at facilities that hold large quantities of dangerous chemicals, especially those near residential areas. The proposal first appeared at the EPA in 2002 in the wake of the 9/11 terrorist attacks.

The April 17 fertilizer plant explosion in West, Texas, that killed 14 people and nearly obliterated a small town has renewed calls for the EPA to act on this proposal, which would grant the agency authority under the Clean Air Act to require facilities to review and use "inherently safer technologies" to reduce the risk of major accidents and chemical releases.

Investigators say a fire at the West Fertilizer facility detonated stores of ammonium nitrate, causing the deadly explosion. A criminal probe into the incident was opened last week. Investigators have identified three possible sources of ignition: a secondary electrical system, a golf cart that apparently had been subject to a recall, or a criminal act, according to The Dallas Morning News.

Under the original EPA proposal, unveiled by top agency officials to address terrorism concerns following 9/11 but never adopted, chemical plants would be made less vulnerable to accidents and terrorist attacks by "reducing quantities of hazardous chemicals handled or stored, substituting less hazardous chemical for extremely hazardous ones, or otherwise modifying the design of processes to reduce or eliminate chemical hazards."

In their 2012 letter to Jackson, the four senators said the proposal would result in legal challenges from the chemical industry and complicate the current regulatory structure for chemical facility safety, which mainly falls under Department of Homeland Security (DHS) jurisdiction.

A 2006 law gave DHS the authority to issue safety and anti-terrorism standards for chemical facilities, but environmental and labor groups point out that the law is rife with exemptions and loopholes and specifically bars the DHS from requiring that facilities use less poisonous chemicals.

The West Fertilizer facility has held 1,350 times the amount of explosive ammonium nitrate that would trigger oversight from the DHS, but DHS did not know about the stockpile until it blew up because the company failed to notify regulators, according to reports. In addition, the facility's risk management plan did not include "fire" as a potential risk.

In 2006, the EPA fined West Fertilizer $2,300 after finding deficiencies in the West, Texas, plant's risk management plan and directed the company to make corrections. EPA spokeswoman Alisha Johnson told Truthout in an email that, "EPA is committed to continuing to work...to pursue opportunities to increase the safety of chemical plants," but Johnson did not say whether the agency is considering the proposal to require "inherently safer technology" at chemical plants under the Clean Air Act.

In 2009, both the DHS and EPA asked Congress for expanded authority to require that facilities use safer chemicals and practices where feasible and lift exemptions for thousands of water treatment plants and port facilities. A bill was introduced in the House as a result, but environmental and labor groups claim the petrochemical lobby successfully worked to block it.

According to the National Environmental Justice Advisory Council, a federal advisory committee to the EPA, the agency can require facilities to use safer chemicals and technology under the "general duty clause" of the Clean Air Act. The US Chamber of Commerce and a coalition of industry groups recently applauded four House members - Rep. Mike Pompeo (R-Kansas), Jim Matheson (D-Utah), Billy Long (R-Missouri), and Bob Latta (R-Ohio) - for introducing legislation that would limit EPA authority under the clause and keep chemical facility safety under DHS jurisdiction.

The bill flies in the face of a coalition of environmental groups and labor unions, including the United Steelworkers of America and the AFL-CIO, which has petitioned the Obama administration to give the EPA authority to strengthen safety measures at chemical facilities.

"These Republican robots talk about job-killing regulations, but what about people-killing policies and company-killing events?" said Rick Hind, legislative director at Greenpeace, a member of the coalition. "If these disasters are preventable, why not prevent them? If there is a risk of a fire, why not install a smoke detector?"

Senator Vitter, a vocal critic of the EPA and key signatory on the 2012 letter opposing the proposal, received nearly $600,000 in direct campaign contributions from the petrochemical and gas industries from 2007 to 2012, according to the Center for Responsive Politics.

A spokesman at Vitter's Washington, DC office did not respond to a request for comment from Truthout.
During the past 15 years, Vitter and Senator Landrieu's home state of Louisiana had the nation's highest rate of accidents at chemical facilities that hold large amounts of anhydrous ammonia, a poisonous gas, according to data compiled by the Center for Effective Government.

The West, Texas, facility held a large stock of anhydrous ammonia, but it appears that it was not released in the explosion, which may have caused more causalities, according to Hind.

Christine Todd Whitman, former New Jersey governor and EPA administrator under the Bush administration, pushed for the original "inherently safer technology" proposal in the wake of 9/11 to prevent thousands of chemical facilities across the country from being turned into weapons of mass destruction. The Bush administration scuttled the effort and instead made plans to push legislation through Congress, but a bill to give the EPA such authority never materialized as the White House caved to the wishes of the chemical industry, according to reports.

In a 2012 editorial in The New York Times, Whitman explained why, after "a 10-year battle," she still supports giving the EPA the authority to require "inherently safer technology" at chemical facilities:

The current chemical security statute is inadequate to the task. The policy bars the Department of Homeland Security from requiring some specific security measures, like the use of safer chemical processes, and exempts thousands of dangerous chemical facilities, including all water treatment plants and refineries located on navigable waters, from complying with even the weakest security measures.

Hind told Truthout the EPA could move on the proposal with an executive order, but he doubts either the agency or the White House will make such a move whilewrangling with Vitter and the GOP over Gina McCarthy, President Obama's nominee for EPA administrator.

Accidents happen. But multiple accidents over a brief period, say less than 5 years, or large accidents that kill dozens should not happen. Mostly they do not.

If the accident kills more than 100, we will kill you and your immediate family.

This is called deterrence. If you have a law like that on the books, than the people who are responsible will suddenly be much more responsible and safety conscious.