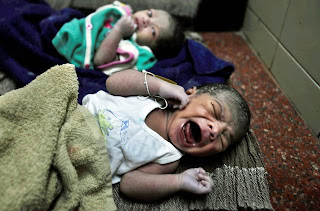 Global population statistics were long overdue for a proper recalculation merely based on better historical analysis. It is obvious that the globe will be modernized by 2050. At that point population growth will be naturally neutral and even negative while lengthening lifespans will keep the bubble up for a while thereafter. Then it must deflate.

What is inevitable is modernization and fertility control by mothers. This will bring about a sociological change in our culture to support superior fertility, but that also naturally creates a check point. A country wishing to grow its population will be forced to invest. We are seeing indicators of all that now been briefly offset by emigration.

Yet that will also be far sooner than anyone really imagines. I think that it will be unsustainable in twenty years.

Thus by 2040, the developed world will need to convert to fertility support at the latest and achieve stability at least. Yet in the long term, I also know that we want to extend the human life span by an average of two hundred years. Thus if we have population replacement presently taking 75 years, such an expansion will allow our population to naturally rise to 30,000,000,000 people.

As I have posted ,the globe can sustain a population of 100 billion people. A third of that would have an excellent outcome and allow the option of additional expansion at a leisurely pace.

There won’t be an overstuffed world, after all

Malthusians can breathe a sigh of relief: If current trends hold, human beings won’t fulfill doomsday predictions by making like rabbits after all. Thanks to the success of incessant fear-mongering, the world’s population is expected to peak soon and then begin a long slide downward. That’s fewer of us “defacing” the planet.

A research team from the Autonomous University of Madrid and CEU-San Pablo University in Spain predicts the global population will begin to decline by the middle of the 21st century. Their study, published in the scientific journal “Simulation,” used computer models to project population based on current fertility and death rates. It predicts that global population will reach its high-water mark around the middle of the century, then decline. By 2100, there will be only about 6.2 billion of us, about the same number as in 2000.

Only yesterday, on Oct. 31, 2011 (Halloween, as a matter of fact), the United Nations announced the birth of the 7 billionth baby — not in celebration, but in alarm. The U.N. called it the “Day of 7 Billion,” and sounded “a call to action to world leaders to meet the challenges that a growing population poses.” The U.N. Population Fund marked the occasion with a report that included a graph projecting a steep increase in the rate of human growth, and asked the scary question: “Will my grandchildren live in a world of 10 billion?”

The U.N. has spent decades and billions of dollars to bend the rate of childbirth downward, particularly in Third World nations, where large families are often considered essential to work the fields and hence survival. The new population study confirms the global body’s success in persuading humans that less is more. “Overpopulation was a specter in the 1960s and ‘70s, but historically the U.N.’s low fertility-variant forecasts have been fulfilled,” writes Felix F. Munoz, researcher and co-author of the project.

Behind population-control schemes lurk the pessimistic belief that one human being is a consumer; a billion is an environmental disaster. Thomas Malthus, an 18th-century Anglican clergyman, taught that population growth would eventually reach a tipping point and that famine and disease would kill numbers that threatened sustainability: “The increase of population is necessarily limited by the means of subsistence.”

Malthus could not have predicted the miracles of the 21st century. Stephen Hawking, a famous theoretical physicist, has lived his 71 years with Lou Gehrig’s disease, which has left him a quadriplegic. Modern medicine has redefined “the means of subsistence,” allowing Mr. Hawking to project influence from his motorized wheelchair. He is living proof that efforts to limit human growth are foolhardy when a universe of God-given potential lives to be tapped within each person.

An empty world would represent failure for the human race, not success. Better to face the future with courage than be taken in by the doomsayers. Human ingenuity is the ultimate resource.