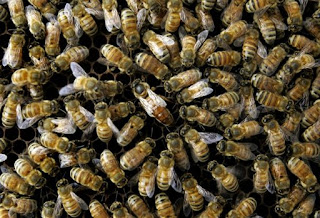 The only item on this ridiculous laundry list that deserves to be considered at all is the last one which has been introduced newly into the environment and for which we are now discovering increased toxicity in combination well beyond expectations.

Bluntly the pesticide protocol is now entering an era of maximum damage and rapidly declining effectiveness. This year the CCD problem became a bee pandemic and is impacting everywhere. Worse there is no evidence of it running itself out as yet. It is certainly not biological as that will run itself out and we have no sign of that.

Neonicotinoids are a leading contender because of the way in which they are applied, but it turns out that in combination with other types the effect is exaggerated.

The more serious take home is that conversion to the organic protocol needs to be accelerated. That alone will solve this crisis in our food supply. This can be done deliberately with tweaking subsidies.  I would establish a ten year subsidy decline curve that organic operators get to avoid.

In the meantime, grow a wild belt along the rows to allow wild bees and wasps to prosper. It escapes me why this is not a practiced to begin with.

WASHINGTON - A new federal report blames a combination of problems for a mysterious and dramatic disappearance of U.S. honeybees since 2006.

The multiple causes make it harder to do something about what's called colony collapse disorder, experts say. The disorder has caused as much as one-third of the nation's bees to just disappear each winter since 2006.

The federal report, issued Thursday by the Agriculture Department and the Environmental Protection Agency, said the biggest culprit is the parasitic mite varroa destructor, calling it "the single most detrimental pest of honeybees."

The problem has also hit bee colonies in Europe, where regulators are considering a ban on a type of pesticides known as neonicotinoids that some environmental groups blame for the bee collapse. The U.S. report cites pesticides, but near the bottom of the list of factors. And federal officials and researchers advising them said the science doesn't justify a ban of the pesticides yet.

May Berenbaum, a top bee researcher from the University of Illinois, said in an interview that she was "extremely dubious" that banning the pesticide would have any effect on bee health. She participated in a large conference of scientists that the government brought together last year to figure out what's going on, and the new report is the result of that conference.

Berenbaum said more than 100 different chemicals — not just the pesticides that may be banned in Europe — have been found in bee colonies. Scientists find it hard to calculate how they react in different dosages and at different combinations, she said.

Some of these chemicals harm the immune systems of bees or amplify viruses, said Penn State University bee expert Diana Cox-Foster. swamy, a top USDA official, said the scientific consensus is that there are multiple factors "and you can't parse any one out to be the smoking gun."

Dave Gaulson of the University of Stirling in Scotland, who conducted a study last year that implicated the chemical, said he can't disagree with the overall conclusions of the U.S. government report. However, he said it could have emphasized pesticides more.

The environmental group, Pesticide Action Network North America blasted the federal government for not following Europe's lead in looking at a ban of certain pesticides.

Pollinators, like honeybees, are crucial to the U.S. food supply. About $30 billion a year in agriculture depends on their health, said Ramaswamy.

Besides making honey, honeybees pollinate more than 90 flowering crops. Among them are a variety of fruits and vegetables: apples, nuts, avocados, soybeans, asparagus, broccoli, citrus fruit and cranberries. About one-third of the human diet comes from insect-pollinated plants, and the honeybee is responsible for 80 per cent of that pollination.

"It affects virtually every American whether they realize it or not," said EPA acting administrator Bob Perciasepe.

Zac Browning, a fourth-generation commercial beekeeper who has hives in Idaho, North Dakota and California, said the nation is "on the brink" of not having enough bees to pollinate its crops.

University of Maryland entomologist David Inouye, who was not part of the federal report, said he agrees that there are multiple causes.

"It's not a simple situation. If it were one factor we would have identified it by now," he said.

Inouye, president-elect of the Ecological Society of America, said the problems in Europe and United States may be slightly different. In America, bee hives are trucked from farm to farm to pollinate large tracts of land and that may help spread the parasites and disease, as well as add stress to the colonies, while in Europe they stay put so those issues may not be as big a factor.

At the news conference, Berenbaum said there's no single solution to the U.S. bee problem: "We're not really well equipped or even used to fighting on multiple fronts."