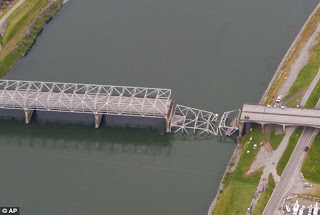 Before we all rush to judgment here I would like to make a couple of comments.  I saw this bridge for the first time back in the seventies and it was obsolete then.  I was surprised to see such a bridge on such an important artery at all.  Usually by then the road has been shifted and a modern bridge is carrying the primary load.  It also goes without saying that bumpers are in place along the sides to handle glancing blows.  So unless something really happened with the load itself, this really makes little sense at all.

However something else also happened, The truck was passed rather quickly by another lighter truck as it was placing maximum load on this span.  This means just as the bridge itself was fully loaded and all give was drawn out of the bridge itself, a faster moving wave produced by the passage of the smaller but still heavy enough vehicle passed through the zone of peak extension.  That could easily have blown bolts, particularly if a few had hidden corrosion.

I have no doubt that the bridge was rated for this peak load and that many such loads have in fact passed over this bridge.  It is the sole North South land route between the and for truck traffic.

There was slim evidence on the truck of any significant damage that is presently mentioned which is otherwise convincing.  As said, it is exactly this type of event that the bridge is engineered to accommodate.

When all the tension is pulled out of a structure by a heavy load, it is the second blow that actually brings it down.  Obviously we finally ran out of luck.  If this is the case, then these bridges need to establish one at a time passage rules for large loads.  This could easily be policed directly by truckers making sure no other large vehicles are coming up on as they prepare to enter these bridges.  Better yet, have traffic patrol step in as they are about anyway.

The collapse of a bridge on state's main north-south highway after a glancing bump from a truck's oversized load has 's crumbling infrastructure back in the spotlight.


An Edmonton-area trucker hauling a piece of drilling equipment is being fingered as responsible for knocking a section of bridge on Highway I-5 into the Skagit River, about 130 kilometres south of the Canadian border.

No one was killed but three people had to be rescued when their cars tumbled 15 metres into the water, CTV News reported. Only one remained in hospital Friday.

Police claim Thursday's collapse was triggered when the load Bill Scott of Spruce Grove, Alta., was carrying hit a support girder on its way across. Scott's truck was not caught up in the collapse.

"He looked in the mirrors and it just dropped out of sight," his wife, Cynthia Scott, told The Canadian Press on Friday. "I spoke to him seconds after it happened. He was just horrified.

"They're saying in the news that he plowed into the [bridge] and I'm going, 'No, he didn't plow into anything.' "

She said the her husband told her the load sustained one small dent, hardly enough to trigger a catastrophic failure of the bridge.

"It would seem extremely strange that something so small could topple a bridge,"

Cynthia Scott told CP. "It does seem very bizarre that something like this did happen."

Interstate 5 is one of the busiest highways, the Vancouver Sun reported. It runs from the B.C.-Washington border, through the state and into and as far as .

The bridge, near , is almost 60 years old. Though not classified as structurally deficient, a Administration lists it as "functionally obsolete," meaning its design is outdated because road shoulders may be too narrow and the overhead clearances too low, CP reported.

The trucking firm that employed Scott said it had obtained all the necessary permits to take the load across the bridge, and had a vehicle driving ahead to check for height clearances.

The bridge, which was inspected regularly, had a sufficiency rating of 57.4 out of 100, compared with a statewide average of 80, according to an Associated Press analysis, though 759 other bridges have lower scores.

Washington Gov. Jay Inslee acknowledged to reporters at the site of the collapse that many of his state's bridges are in desperate need of repair, the Sun reported. But like most governments, including those in , other budget priorities put infrastructure upkeep on the back burner.

"This is the arterial of commerce and industry for the entire state of . It is Job No. 1 for all of us," he said, according to the Sun. "Obviously we need to do an investigation to find out what happened here. That may take days and weeks.

"We have some work to do on our bridges whether or not this accident happened and we have some discussions in [the state capital] about making sure we make investments in bridges to prevent this from happening."

Six years ago, 13 people died and 145 were injured when a highway bridge spanning the Mississippi River in , collapsed during rush hour.

A National Transportation Safety Board investigation said the Aug. 1, 2007, disaster was caused by a design flaw in the 1960s-era bridge, according to the New York Times. Metal plates that served as junction points for supporting girders were too thin, and upgrades to the road surface increased weight that added to the strain.

Canadians, especially in Quebec, aren't unfamiliar with pieces of roadway that betray them.

In 2011, a 15-metre slab of concrete in 's 40-year-old Ville-Marie Expressway tunnel dropped onto the road. Luckily no one was hurt.

But five years earlier, an overpass in suburban collapsed, crushing five people to death. An inquiry found "a series of shortcomings" in design, construction materials and maintenance contributed to the tragedy, CBC News reported.

Canadian municipalities want to double its annual budget for infrastructure to $5.75 billion and commit to long-term funding so they can systematically deal with decaying roads, bridges, water systems and other essential public infrastructure, Postmedia News said.
Posted by arclein at 12:00 AM