Toughening up all Fiber 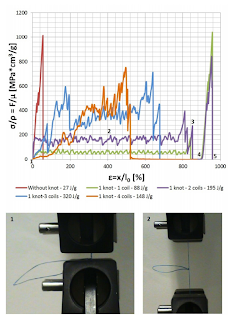 It is not that the fiber itself became stronger; it is that the knot slows the take up of tension providing increased toughness.  Since that describes almost all situations including the stopping of a bullet, the discovery is important and will certainly be applied even to cheap fibers.

How about nylon stockings?  You get the idea.

I continue to look forward to a real space elevator cable using graphene and this work advances feasibility.

A materials scientist has created the world’s toughest fiber using a mechanism based on a slip knot.

So there is great interest in finding new materials that can match or beat the performance of natural materials for applications that require high levels of energy absorption.

Today, Nicola Pugno at the of in reveals a remarkably simple trick that dramatically increases the toughness of almost any kind of fibre. Indeed, Pugno says he has used the technique to create the world’s toughest fibre.

The new idea is deceptively simple–it involves no more than tying a slip knot in the fibre, creating a loop of extra fibre that can passes through the knot as it comes under tension.

The mechanism is straightforward. When the fibre is placed in tension, the slip knot begins to tighten and the extra material passes through the knot, dissipating energy through friction.

Of course, the fibre eventually breaks but only after all the material in the loop has passed through the slip knot.

Clearly this doesn’t make the material any stronger (toughness and strength are different properties that are generally uncorrelated). However, it’s not hard to see how the energy dissipation would dramatically increase the amount of energy the fibre absorbs before it breaks, thereby increasing its toughness.

Pugno says he has tested the idea on a number of materials using different numbers of loops and slip knots. The best results come from using three slip knots, he says.

By applying this simple trick to a commercial polymer fibre called Endumax, he has increased its toughness from 44 Joules per gram to a remarkable 1070 Joules per gram. That’s the highest value ever recorded. “The proof of concept is experimentally realized making the world’s toughest fibre,” he says.

That’s better even than fibres made from nanotubes which materials scientists are just beginning to make. The strongest of these, made from carbon nanotubes, has a toughness of 970 Joules per gram.

Pugno says his work is just the beginning and that it ought to be possible to use his slip-knot technique to make graphene fibres with a toughness of 100,000 Joules per gram.

There are challenges ahead, of course. Ideally, the force required to pass the fibre through the knot should be just below the material’s breaking point and this depends on factors such as the knot topology. The choice of knot has an important influence on the behaviour of the material and further work here could lead to novel designs. Pugno says he is currently patenting his slip-knot design and so has not yet published it.

The potential applications of this idea are many. Tougher materials could obviously be used in areas where energy absorption is important, such as the manufacture of body armour, for example.

That’s an effective and cheap idea that has significant potential. It’s also extraordinarily simple, which might just be the reason it has been overlooked until now.