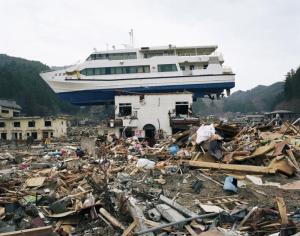 What this really means is that GPS stations can be set up in target areas and we really know most of them anyway, or at least to the level of resolution needed. With that it will become possible to determine what moved and better still immediately understand the available tsunami energy.

That leads directly to a predictive output map produced in real time minutes after the Earth moved. With that early warning equipment and first responders already are targeted and in possession of contingency orders. Better yet it will be possible to discount false negatives in which a quake takes place but fails to produce sufficient seabed energy.

Right now vulnerable areas need evacuation plans. Until now it has been mostly pointless because you did not know until you saw the wave unless it was a major event that woke everyone up. Recall Indonesia in which the quake effectively went unremarked. Much the same happened in Japan although an evacuation was underway in places but unconvincing because of prior false alarms.

When the siren howls and you can turn on your TV to discover you are in a must run zone, the system will be working.

May 17, 2013 — Researchers have shown that, by using global positioning systems (GPS) to measure ground deformation caused by a large underwater earthquake, they can provide accurate warning of the resulting tsunami in just a few minutes after the earthquake onset. For the devastating Japan 2011 event, the team reveals that the analysis of the GPS data and issue of a detailed tsunami alert would have taken no more than three minutes.

The results are published on 17 May inNatural Hazards and Earth System Sciences, an open access journal of the European Geosciences Union (EGU).

Most tsunamis, including those in offshore Sumatra, Indonesia in 2004 and Japan in 2011, occur following underwater ground motion in subduction zones, locations where a tectonic plate slips under another causing a large earthquake. To a lesser extent, the resulting uplift of the sea floor also affects coastal regions. There, researchers can measure the small ground deformation along the coast with GPS and use this to determine tsunami information.

"High-precision real-time processing and inversion of these data enable reconstruction of the earthquake source, described as slip at the subduction interface. This can be used to calculate the uplift of the sea floor, which in turn is used as initial condition for a tsunami model to predict arrival times and maximum wave heights at the coast," says lead-author Andreas Hoechner from the German Research Centre for Geosciences (GFZ).

In the new Natural Hazards and Earth System Sciences paper, the researchers use the Japan 2011 tsunami, which hit the country's northeast coast in less than half an hour and caused significant damage, as a case study. They show that their method could have provided detailed tsunami alert as soon as three minutes after the beginning of the earthquake that generated it.

"Japan has a very dense network of GPS stations, but these were not being used for tsunami early warning as of 2011. Certainly this is going to change soon," states Hoechner.

The scientists used raw data from the Japanese GPS Earth Observation Network (GEONET) recorded a day before to a day after the 2011 earthquake. To shorten the time needed to provide a tsunami alert, they only used data from 50 GPS stations on the northeast coast of Japan, out of about 1200 GEONET stations available in the country.

At present, tsunami warning is based on seismological methods. However, within the time limit of 5 to 10 minutes, these traditional techniques tend to underestimate the earthquake magnitude of large events. Furthermore, they provide only limited information on the geometry of the tsunami source (see note). Both factors can lead to underprediction of wave heights and tsunami coastal impact. Hoechner and his team say their method does not suffer from the same problems and can provide fast, detailed and accurate tsunami alerts.

The next step is to see how the GPS solution works in practice in Japan or other areas prone to devastating tsunamis. As part of the GFZ-lead German Indonesian Tsunami Early Warning System project, several GPS stations were installed in Indonesia after the 2004 earthquake and tsunami near Sumatra, and are already providing valuable information for the warning system.

"The station density is not yet high enough for an independent tsunami early warning in Indonesia, since it is a requirement for this method that the stations be placed densely close to the area of possible earthquake sources, but more stations are being added," says Hoechner.

Traditional tsunami early warning methods use hypocentre (the point directly beneath the epicentre where the seismic fault begins to rupture) and magnitude only, meaning the source of the earthquake and tsunami is regarded as a point source. However, especially in the case of subduction earthquakes, it can have a large extension: in Japan in 2011 the connection between the tectonic plates broke on a length of about 400km and the Sumatra event in 2004 had a length of some 1500km. To get a good tsunami prediction, it is important to consider this extension and the spatial slip distribution.