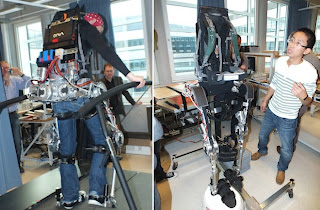 More welcome news on this front. We can all see the future and it is now obvious that we are likely closer than we think. When it gets down to training, technical refinement begins to add to already prepared capability and real progress speeds up.

It is also obvious that we can already build hardware to empower all forms of such physical injury. That is great news.

This whole sector can expect to be a 'solved problem during the next two decades and will largely include mostly full regeneration. While this is happening artificial hardware is welcome.

Thousands of people every year suffer spinal cord injuries and lose their ability to walk. An brain-controlled exoskeleton that moves a patient’s legs could be one way to get some patients out of wheelchairs.

A multinational consortium led by Belgian company Space Applications Services has designed the Mindwalker, which is a frame — the exoskeleton — that attaches to the torso and legs and moves them as the wearer thinks about it.

NEWS: Steer a Ship with Your Brain

Unlike a bionic limb, the exoskeleton doesn’t need to be linked with electrodes inside the body. Instead, it uses a simple cap that reads electrical signals from the brain. When the wearer thinks of moving, a certain pattern appears, which is interpreted by a computer as a signal to move.

The Mindwalker design uses a “dry” cap, which doesn’t need special gels to boost electrical conductivity, so it is much more convenient to use than “wet” caps often used to study brain activity.

This concept is a bit different from the Ekso system, which works by registering shifts in weight, or the powered exoskeletons built for military use such as the Human Universal Load Carrier, which assist movement in people who have full use of their limbs. And unlike bionic limb designs, the Mindwalker bypasses the spinal cord and nerves — there’s no need for attaching electrodes inside the body.

One challenge has been getting clean signals from the brain and using them to refine the gait of the device. Most walking robots are designed with a gait that doesn’t bear much resemblance to a human. And typically, robotic legs aren’t good at re-balancing if pushed.

Mindwalker’s software allows it to cope with that, somewhat, but Michel Ilzkovitz, systems and ground segment engineering Manager at Space Applicatons, told Discovery News that although able-bodied people can balance, people with spinal cord injuries will still need a set of crutches.

It’s also built to be lighter, and thus easier to move. It’s still heavy, at 70 pounds, but that’s a lot lighter than many early designs.

It also requires training. The cap is looking for a certain set of signals, but they are hard to pick up amid the noise, and they differ slightly between people. Mindwalker wearers must learn how to make their brains give a “clean” signal, so they need to practice using it in a virtual-reality setting.

The Mindwalker has been tested with able-bodied users, and through May of this year volunteers with spinal cord injuries will try it out.