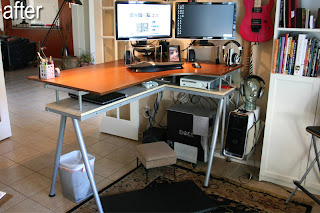 The huge take home here is that exercising does not counter the negative effects of a sit down job.  What does though is a stand up desk.

The obvious answer is a hydraulic lift or its equivalent for every work station desk.  It has to be comfortable you use your key board while standing and an adjustable desk makes that possible.

Even easier, tilt your flat screen back about twenty degrees and get an eight inch base to set your keyboard on.  In that manner, you can easily rotate between standing and sitting.

That is even easier to work with as either position becomes distracting on its own.  Just having the option is place will be helpful.

Twenty degrees does not take away from the sitting position either so you are not constantly readjusting.

NaturalNews) Sitting for long periods of time, as untold millions of people around the world do every single day, can greatly increase your risk of disease and death. New research published in the journal Diabetologica has once again confirmed that excess sitting can significantly increase a person's risk of developing cancer, blood clots in the brain, and heart disease, which further makes the case that exercising and even just standing up more can literally mean the difference between life and death.

Building upon previous research into the health effects of sitting, researchers from Leicester University in the U.K. evaluated the sitting habits of two groups of men and women, some of whom sat for as little as a few hours a day, and some of whom sat for as many as 16 hours a day. They then evaluated the long-term health conditions of these groups to look for variances based on their respective number of sitting hours.

Upon observation, it was determined that the longer a person sits each day, the more likely he or she is to develop markers of metabolic syndrome, which include high levels of both glucose and fatty acids in the bloodstream. As it turns out, an individual's metabolic rate, which represents the amount of energy expended while at rest, also plummets while sitting, which in the absence of proper exercise can lead to being overweight or obese.

"The longer the time you spend sitting, the higher the amount of sugars and fats that accumulate in your bloodstream regardless of the time you spend exercising," explains Dr. Joseph Henson, a diabetes researcher from . "There's a significant difference between people who sit a lot and those who don't. Those who spend the least time sitting have the lowest values of glucose and fats in their blood."

Oddly enough, moderate or rigorous exercise is not necessarily the only way to remedy the problem of excess sitting. Simply standing up more helps activate enzymes in the muscles responsible for breaking down the residual fats and sugars in the bloodstream that can lead to diabetes and other conditions. According to the data, standing up for an additional three hours a day can result in the shedding of nearly eight pounds of excess weight over the course of a year.

"The approach requires a paradigm shift, so that individuals at high risk of developing Type II diabetes think about the balance of sedentary behavior and physical activity throughout the days," adds Dr. Henson, as quoted by New Zealand's IOL.co.za.

Standing desks are a great initiative -- I've got one myself. I reckon I spend about 80 percent of my time at work standing up."