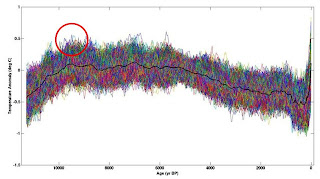 A new simulation of past climate has come out and this item spells out just how wrong it has to inevitably be. Again we get an extremely exaggerated hockey stick. That even makes no note of the decadal flat period we are in.

Why anyone is still trying to hang on to the hockey stick metaphor escapes me. This is called wishful thinking.

It also reminds us just how recent the advent of temperate agriculture must be. It was only possible after 6000 BC in most locales. And that is when the great agriculture expansion got serious.

The first centers were the seed colonies and situated in refugia that allowed them to prosper while the remaining ice melted. These appear to have gone in around 8000 BC. 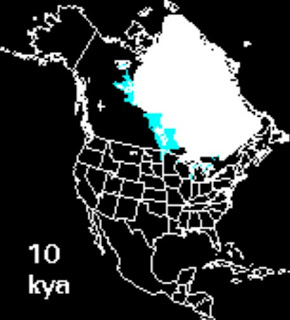 Smoking Gun That The New Hockey Stick Is Junk Science

Posted on March 8, 2013by stevengoddard

Ten thousand years ago, most of Canada was covered with ice. This would have reflected most of the summer sunlight received there back into space, and would have had a huge cooling effect on the planet. The 1990 IPCC report correctly showed this, with temperatures about 4C cooler than the Holocene Maximum.

But the new hockey stick shows temperatures 10,000 years ago within 0.1C of the Holocene Maximum. This is nonsensical and impossible. That huge mass of ice would have kept the planet very cool.

But it is worse than it seems. The latent heat of melting ice also would have had a huge cooling effect. Between 10,000 and 8,000 years ago, most of the ice melted. This would have dominated the energy balance and kept air temperatures very cool.

[ this needs to be appreciated. Temperatures were controlled by winds coming of the ice and these could easily have hit Florida in July.]

Additionally, Paul Homewood points out that the melting ice would have flowed into the oceans and cooled sea surface temperatures, compounding the cooling effect. 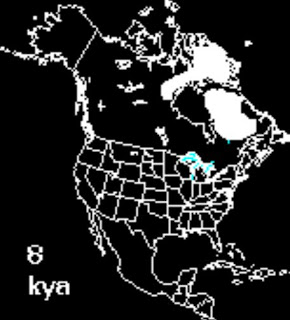 There is a zero percent chance that the new hockey stick is correct – as they have run afoul of several fundamental principles of physics. Temperatures 10,000 years ago could not have been close to the Holocene maximum.