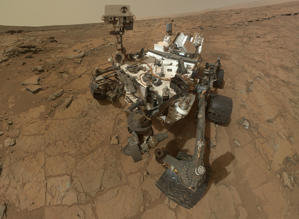 I am not convinced yet that it is possible to locate hard evidence of life here.  Carbon based life likes to leave a mess of some sort somewhere and we see no smoking gun as yet.  Yet this is reassuring in one regard.

It is now plausible to cover a patch of Mars with a large greenhouse and grow things in a controlled environment.  A soil is possible.

Otherwise, we have to stay underground and be completely artificial in our approach.  Again we can do this and will have to in most places.  Mars can give us a break.

Our first expedition to Mars should pack a large bubble shelter that can be inflated and contain manufactured air.  This will ease the pressure on haulage, and living room and perhaps allow experiments in growing that could allow an extended stay.

Curiosity rover finds conditions suitable for past life on Mars

The results are in from the analysis of Curiosity's first rock sample, collected early last month, and they show that the Gale Crater was once an environment that was capable of supporting life.

"A fundamental question for this mission is whether Mars could have supported a habitable environment," said Michael Meyer, lead scientist for NASA's Mars Exploration Program. "From what we know now, the answer is yes."

The data the scientists retrieved from the rover's Sample Analysis at Mars (SAM) and Chemistry and Mineralogy (CheMin) instruments shows that the rock powder contains clay minerals that are known to form in a neutral water environment, not too acidic or alkaline, which is the perfect environment for microbes to not only develop, but thrive.

"The range of chemical ingredients we have identified in the sample is impressive, and it suggests pairings such as sulfates and sulfides that indicate a possible chemical energy source for micro-organisms," said Paul Mahaffy, principal investigator of the SAM instrument at NASA's . It is well-known that there are organisms here on Earth that can derive energy from the rocks they live on, calledchemotrophs, so it is quite possible that these organisms existed on Mars, in the past.

Curiosity has been on the Red Planet for just over seven months now, slowly making its way from its landing zone to the base of Mount Sharp, where it will start its primary mission — to search for evidence of past life on Mars. On this slow journey, it has stopped at interesting locations on the way, to test out its various tools and instruments, and its drilling efforts last month were another of these tests.

The science team ran into some snags over the past two weeks, as the rover first suffered a computer error just after its first successful drilling and then had to power down as a precaution, due to massive solar storm that was sweeping past the planet. However, now that the rover is back on track and recovering, the science team now wants to take a second rock sample, to confirm their findings, and get more data to explore the discovery further.

"We have characterized a very ancient, but strangely new 'gray Mars' where conditions once were favorable for life," said John Grotzinger, Mars Science Laboratory project scientist at CalTech. "Curiosity is on a mission of discovery and exploration, and as a team we feel there are many more exciting discoveries ahead of us in the months and years to come."