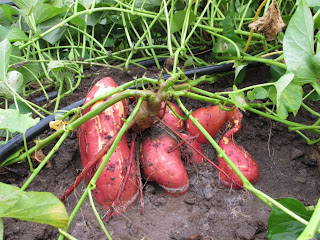 Somehow the sweet potato traveled during prehistoric times, and realistically that means in the preceding thousand years at least and possibly much earlier. Actual direct contact as per Thor Heyerdahl is possible but seems unlikely. I am more inclined to take advantage of the Bronze Age sea based global polity formed between 3,000 BC and 1000 BC.

I have no doubt that plenty of plants were tested in new locales but I also know that few succeeded from the resulting anomalies. Global agriculture was still a rarity. Local prospects generally remained local. Thus it was limited to a handful of plants such as the coconut, cotton, amaranth and totoro reed that could survive the tropics and prolonged exposure to wetting. Someone really had to want to do it and make the trip in a world in which the traders did not actually colonize that much.

From this perspective, the sweet potato is a natural.

Prehistoric and historical dispersal of sweet potato in Oceania, as postulated by the tripartite hypothesis. Credit: (c) PNAS, DOI: 10.1073/pnas.1211049110

(Phys.org)—A French based research team has found DNA evidence in sweet potato samples that suggests that early Polynesian explorers visited South America. Those early explorers, the researchers write in their paper published in the Proceedings of the National Academy of Sciences, brought the sweet potato back with them when they returned from their long voyages.

Tracing the history of agricultural products is one way scientists track the migration of people during times when no written records were left behind to offer clues. In this new effort, researchers have been investigating the likely path of the sweet potato. First domesticated in the Andes in South America, approximately 8000 years ago, the tuber has since that time migrated to virtually every habitable part of the planet. Sweet potatoes are highly nutritious and easy to grow and because of that their introduction into various societies has had a dramatic impact. But how they got from South America to different parts of the world has been a mystery, though there have been several competing theories. One of the most compelling suggested the idea of a "tripartite" migration path, which means it came in three different ways. Now, new DNA research appears to back up this idea.

Initial DNA analysis done on sweet potato samples found in several locations around the world revealed that its history is varied and cloudy at best, with several varieties mixing to create a mish-mash that doesn't provide many answers. To help clear things up, the researchers sampled specimens brought back by early explorers such asJames Cook. In so doing, they found that the DNA evidence indicated that the sweet potato had migrated to Polynesia long before European explorers had made their way to that part of the world. That meant that the Polynesians had to go get it themselves or it got there some other way, such as via seeds carried in the wind, aboard natural rafts etc. But because scientists have already uncovered proof that Polynesian sailors made it as far as the Easter Islands, it seems plausible to envision they extended their reach to mainland South America as well.

The DNA evidence also showed that another two lines came about as a result of European exploration – originating from South America to Europe and then on to other parts of the world. In the first wave, the sweet potato was carried to the western Pacific, in the second it was carried to the Philippines. Both resulted in further sweet potato migration to their respective parts of the world.

The history of sweet potato in the Paciﬁc has long been an enigma. Archaeological, linguistic, and ethnobotanical data suggest that prehistoric human-mediated dispersal events contributed to the distribution in Oceania of this American domesticate. According to the "tripartite hypothesis," sweet potato was introduced into Oceania from South America in pre-Columbian times and was then later newly introduced, and diffused widely across the Paciﬁc, by Europeans via two historically documented routes from Mexico and the Caribbean. Although sweet potato is the most convincing example of putative pre-Columbian connections between human occupants of Polynesia and South America, the search for genetic evidence of pre-Columbian dispersal of sweet potato into Oceania has been inconclusive. Our study attempts to ﬁll this gap. Using complementary sets of markers (chloroplast and nuclear microsatellites) and both modern and herbarium samples, we test the tripartite hypothesis. Our results provide strong support for prehistoric transfer(s) of sweet potato from South America (Peru-Ecuador region) into Polynesia. Our results also document a temporal shift in the pattern of distribution of genetic variation in sweet potato in Oceania. Later reintroductions, accompanied by recombination between distinct sweet potato gene pools, have reshufﬂed the crop's initial genetic base, obscuring primary patterns of diffusion and, at the same time, giving rise to an impressive number of local variants. Moreover, our study shows that phenotypes, names, and neutral genes do not necessarily share completely parallel evolutionary histories. Multidisciplinary approaches, thus, appear necessary for accurate reconstruction of the intertwined histories of plants and humans.