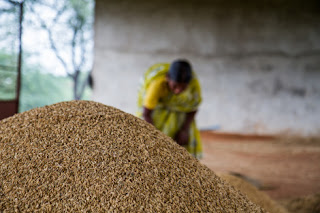 It is really simple. A weight of root below ground produces a similar weight above ground. Thus the most important aspect of production is to maximize the bio weight that is underground. This should have been perfected centuries ago but has obviously not. Now it is been applied by improved spacing and the crop responds. Of course the use of organic fertilizers provides an additional influx of full spectrum nutrition that ensures optimal production also.


Now imagine adding a steady dressing of biochar to the organic fertilizer a and meet goals that seem impossible.

The only thing that is still difficult is handling the organic component. That part is labor intensive and needs to be smartened up if that is possible. A lot can be converted to biochar through drying and heating yet a portion does need to be rotted down in order to produce biologicals we barely recognize yet. Otherwise it would make far better sense to dry everything and fire it all through a fast kiln to make biochar as that captures all the chemistry.

In the future, every farm will need a drying shed. Since it is not too hard to turn stuff over and air drying is quite good enough, even a couple of weeks are sufficient to make the material bin ready. That means a later crop can also be handled easily.


What if the agricultural revolution has already happened and we didn’t realize it? Essentially, that’s the idea in this report from the Guardian about a group of poverty-stricken Indian rice and potato farmers who harvested confirmed world-record yields of rice and potatoes. Best of all: They did it completely sans-GMOs or even chemicals of any kind.

[Sumant] Kumar, a shy young farmer in Nalanda district of India’s poorest state Bihar, had — using only farmyard manure and without any herbicides — grown an astonishing 22.4 tonnes of rice on one hectare [~2.5 acres] of land. This was a world record and with rice the staple food of more than half the world’s population of seven billion, big news.

It beat not just the 19.4 tonnes achieved by the “father of rice”, the Chinese agricultural scientist Yuan Longping, but the World Bank-funded scientists at the International Rice Research Institute in the Philippines, and anything achieved by the biggest European and American seed and GM companies. And it was not just Sumant Kumar. Krishna, Nitish, Sanjay and Bijay, his friends and rivals in Darveshpura, all recorded over 17 tonnes, and many others in the villages around claimed to have more than doubled their usual yields.

Another Bihar farmer broke India’s wheat-growing record the same year. They accomplished all this without GMOs or advanced seed hybrids, artificial fertilizer or herbicide. Instead, they used a technique called System of Rice [or root] Intensification (SRI). It’s a technique developed in Madagascar in the 1980s by a French Jesuit and then identified and promulgated by Cornell political scientist and international development specialist Norman Uphoff.

SRI for rice involves starting with fewer, more widely spaced plants; using less water; actively aerating the soil; and applying lots of organic fertilizer. According to Uphoff’s SRI Institute website [PDF], the farmers who use synthetic fertilizer with the technique get lower yields than those who farm organically. How’s that for pleasant irony?


The breadth of the results in Bihar have gotten international attention. The Guardian reports that economist Joseph Stieglitz, a Nobel laureate and international development aficionado, visited the area last month. After seeing their amazing results, he declared the farmers “better than scientists.”

High praise aside, the technique is not without its detractors. Most western governments and agricultural scientists remain skeptical of the practice: Many challenge that the reported yields aren’t verified, there’s insufficient science behind the technique, and they worry it can’t scale to larger farms.

SRI is a set of management practices and nothing else, many of which have been known for a long time and are best recommended practice … Scientifically speaking I don’t believe there is any miracle. When people independently have evaluated SRI principles then the result has usually been quite different from what has been reported on farm evaluations conducted by NGOs and others who are promoting it. Most scientists have had difficulty replicating the observations.

Given the paucity — or total absence — of independent testing done on GMOs and pesticides developed by companies like Monsanto and Syngenta, it’s galling to read of scientists complaining “there is not enough peer-reviewed evidence around SRI” and that “it is impossible to get such returns.”

Here’s where the potential conflicts of interest crop up: The IRRI is currently involved in developing GMO rice as a core component of a campaign to increase yields worldwide. This doesn’t entirely invalidate its position on SRI, but it points to the ideological divide in agriculture between those who believe in technology as the only solution to “feeding the world” and those who put faith in non-technological, agro-ecological techniques to accomplish the same.

(It’s also worth noting that the regions in India that invested heavily in Monsanto’s GMO RoundUp Ready cotton seeds are seeing yields collapse; Monsanto blames the crop failure on farmers. Grist reported recently on the even deeper tragedy many of these farmers are experiencing.)

Much of this divide comes from a belief among many scientists and most western governments that the developing world must adopt western-style industrial ag techniques in order to produce enough food. But that view is a fantasy: Even today, as the Guardian article observes, 93 percent of Bihar’s 100 million residents are subsistence farmers.

It’s delusional to expect that Bihar and the vast populations of Africa, Indonesia, and China will transform into western-style economies with western-style population distributions. Billions of people across the globe will remain subsistence farmers far into the future; what they require are farming techniques that can improve yields even modestly. Forcing regions that don’t have passable roads (much less electrification) to rely on the grace of multinational organizations to supply seeds, fertilizers, and chemicals seems borderline criminal.

SRI appears to offer an acceptable alternative for a variety of crops, including rice, potatoes, wheat, corn, beans, eggplant, onions, carrots, sugar cane, and even tomatoes.

For many westerners, including many western journalists, it’s difficult to separate the concept of “progress” from its inevitable modifier, “technological.” SRI may not be technology-based, but it’s science-based and sophisticated. It’s also continually field tested and improved through farmers’ own feedback. It’s exactly the kind of flexible, responsive system you’d demand from any truly sustainable agriculture — as opposed to the regimented, top-down application of chemical- and biotech-based approaches.

Plain old western snobbery shouldn’t be discounted, either. As agronomist Anil Verma put it in the Guardian article:

If any scientist or a company came up with a technology that almost guaranteed a 50% increase in yields at no extra cost they would get a Nobel prize. But when young Biharian farmers do that they get nothing.

Does SRI need more research? Absolutely. Can it be adapted to large-scale monocrop agriculture? Probably not. But that’s exactly the kind of agriculture that’s failing us and needs to be reassessed entirely.

Where does SRI go from here? In India, at least, Bihar alone is investing $50 million in expanding adoption. However, the Guardianreports that “Western governments and foundations are holding back, preferring to invest in hi-tech research.”

Meanwhile, Monsanto shows no signs of slowing down: Indications are that it will win its patent case before the Supreme Court and gain virtual total control of its seeds. This will enable it to continue charging inflated prices for a technology that provides modest yield increases, if any, and certainly nothing close to the 30-percent increase many agronomists are praying for.
It’s always possible we’ll wake up to the successes being pioneered by the unlikeliest of subjects — subsistence farmers in the far east. Until then, Monsanto’s technology-driven vision of agriculture is winning here in the west.

Tom Laskawy is a founder and executive director of the Food & Environment Reporting Network and a contributing writer at Grist covering food and agricultural policy. His writing has also appeared in The American Prospect, Slate, The New York Times, and The New Republic. Follow him on Twitter.
Posted by arclein at 12:00 AM