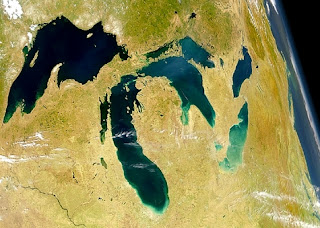 In reality, this is a battle that can not be won. The Mississippi Basin and the Great Lakes Basin share a thousand mile long headwaters consisting mostly of farm fields, wetlands and woodlands. All of it is flushed and flooded during the spring breakup with every depression and ditch full of water. Pathways will exist and carp populations will expand to steadily increase the probability of penetration.

If it has not happened yet, then we have been lucky. Sooner or later all populations in the headwaters regions will reach full capacity at which crossing over the head waters divide such as it is will be biologically pressed.

Once it happens, it is also likely to go undetected for some time as the population increases and spreads out. Carp in the Mississippi was a rumor for a long time before they started filling boats.

Way more important is that we get over it and actively begin fishing them and eating them as a staple of our diet. We are obviously talking of tens of thousands of tons of protein here that happens to be readily harvested. The native fishery is not so easily caught and simply exploiting the carp to the maximum will leave ample room for the native fish to recover and prosper.

Time to speak out on invasive-species plans

In the tense struggle to keep Asian carp out of the Great Lakes, the battle lines are usually drawn near Chicago, where the Illinois River connects the vast Mississippi River system to Lake Michigan, via a manmade network of canals.

That waterway, called the Chicago Sanitary and Ship Canal, since it was built to carry both sewage and barge traffic into the Mississippi River basin, is accurately labeled as ground zero in the fight to prevent the carp and other invasive species from reaching the lakes — the largest surface freshwater system in the world.

But what we have learned as the Asian carp crisis has drawn an increasing amount of study from the scientific community is that we will not be able to secure the Great Lakes by simply closing the Chicago canal. The Great Lakes — this vault of incredible resources we know as the consortium of Erie, Michigan, Superior, Huron, and Ontario – unfortunately have many portals.

A recent study by the U.S. Army Corps of Engineers takes an in-depth look at four potential flash points here in Ohio that Asian carp or other invasive species could use to breech the now frighteningly porous natural barrier that has separated the two water systems for millennia.

The review by the Corps found that the section of the Ohio-Erie Canal at Long Lake in Summit County near Akron should be considered as having “medium probability” for providing a pathway for Asian carp now in the Ohio River system to reach Lake Erie sometime within the next 20 years.

Asian carp gained poster boy status in this issue soon after floods in the mid-1990s allowed them to escape from fish-rearing ponds and wastewater treatment ponds in the southern U.S., where they had been brought in to remove algae and organic matter.

Once in the Mississippi River, these carp, filter feeders that consume huge volumes of plankton from the food web and starve out the young of native species, quickly spread and overwhelmed resident populations of gamefish, such as bass and crappie. The Asian carp that could one day use the Ohio-Erie canal to slip into Lake Erie and endanger the $7 billion fishing industry on the Great Lakes, are now believed to be present as far north as downtown Minneapolis.

The canal was also listed as a potential infiltration route for the invasive Northern snakehead, a large predatory fish that is native to China, Korea, and Russia, but showed up in the U.S. about 15 years ago.

Little Killbuck Creek in Medina County, just west of Summit, was classified as having the same level of risk to allow for the movement of several other lesser known invasives — viral hemorrhagic septicemia virus (VHSv), threespine stickleback, ruffe and tubenose goby and parasitic copepod.

VHSv is a deadly infectious disease that is believed to have originated in European fish farms. The stickleback is a fish native to coastal areas, while the ruffe is a freshwater fish found in Europe and northern Asia and was likely introduced to the Great Lakes through freighters dumping ballast water.

The tubenose goby is a fish native to the brackish waters of the Black Sea and the Caspian Sea, while the parasitic copepod, also known as anchor worms, attaches itself inside the mouth of fish and feeds off its host.

Grand Lake-St. Mary's in Mercer County and Mosquito Creek Lake in Trumbull County are Ohio sites that the Corps determined present a “low probability” of providing a route for invasive species to reach the Great Lakes.

After releasing its reports for review, the Corps also opened the forum for public comments on these studies. This is an opportunity for the citizenry — the taxpayers, the voters, and concerned people of all stripes — to be heard.

The reports might present a daunting and quite foreign realm to wade through — the review of the Ohio-Erie Canal site and its potential vulnerability is nearly 60 pages of text, photos, charts, graphs, and maps. This makes for tough sledding for those less familiar with the vernacular employed by the biologists and scientists on the front lines in this unholy conflict of man vs. nature — there are 22 different acronyms used in the reports, including HUC (Hydrologic Unit Codes) and GLMRIS (Great Lakes and Mississippi River Interbasin Study) — but it is a worthy journey since invasive species such as lamprey, zebra mussels, and round gobies have already proven to be quite destructive once they reached the Great Lakes ecosystem and established themselves there. The more informed we are on the new threats and other vital issues, the better muscled we will be when it comes time to coax the political entities into making the moves that best serve the future health of our Great Lakes.

The highly detailed assessments also include a list of the actions that could be considered to counter these threats and reduce the likelihood of additional invasive species reaching the Great Lakes system. The areas deemed most at-risk will get the lion’s share of attention.

"Further efforts will be concentrated on pathways that have an overall rating of medium or high,” said Jack Drolet, a program manager with GLMRIS. He added that the results of the risk assessments could assist in implementing and updating any plan to manage the most vulnerable Ohio sites.

The reports that have been presented for public review and comment were compiled through the combined efforts of numerous federal, state, and local entities, with the Army Corps of Engineers working the point. The Corps is also in consultation with a wide network of other federal agencies, Native American tribes, state and local agencies, and nongovernmental organizations to “explore options and technologies” that could be employed to prevent invasive species from moving between the Mississippi River and Great Lakes basins.

These reports, along with a library of other documents related to invasive species and the threat they pose to the Great Lakes, can be viewed at glmris.anl.gov. Comments from the public may be submitted electronically at the same Web site, or mailed to: GLMRIS Focus Area 2, Summary Report Comments, 1776 Niagara Street, Buffalo, N.Y. 14207-3199. Comments will be accepted through March 22.