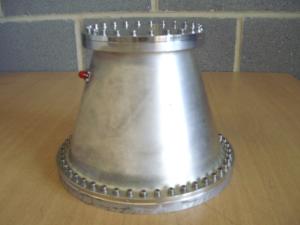 Right now, without any special technology it is already good enough and no it does not contravene the laws of physics unless you think physics is perfectly described by Newton. Super conducting technology gives us a true space drive that will also be able to lift of from the Earth, throw in a fusion drive like the one they are working on at Focus Fusion and space is ours.

It is not anti - gravity or magnetic exclusion which are both effective options to consider although our knowledge of gravity is still pretty weak. Yet the potential outright thrust is huge and uses only direct energy.

This technology demands full financial support as soon as possible as does Focus Fusion. The potential payoff is huge and timely. Both could be matured to operational prototypes inside five years.

Scientists in China have built and tested a radical new space drive. Although the thrust it produces may not be enough to lift your mobile phone, it looks like it could radically change the satellite industry. Satellites are just the start: with superconducting components, this technology could generate the thrust to drive everything from deep space probes to flying cars. And it all started with a British engineer whose invention was ignored and ridiculed in his home country.

The latest research comes from a team headed by Yang Juan, Professor of Propulsion Theory and Engineering of Aeronautics and Astronautics at the Northwestern Polytechnic University in Xi'an. Titled "Net thrust measurement of propellantless microwave thruster," it was published last year in the academic journal Acta Physica Sinica, now translated into English.

The technology is controversial because of that key word "propellantless". Space drives rely on Newton's laws of motion: all are based on the principle of firing propellant out the back at high speed, pushing the spacecraft forward. Even with endless power from solar cells, thrust is still limited by the supply of propellant, even with high-velocity ion drives. Numerous attempts have been made to overcome this, from the infamous Dean Drive of the 1950's to Nasa's experiments with antigravity from spinning superconductors in the 1990's. All have failed, and the efforts of pseudoscientific cranks and scammers have left the field thoroughly discredited.

British engineer Roger Shaywer stepped into this dangerous field in 2001, after twenty years with European satellite firm EADS Astrium. He set up his own company, Satellite Propulsion Research (SPR) Ltd, with the aid of a modest grant from the UK's Department of Trade and Industry.


Shawyer aimed to develop an EmDrive: a closed, conical container which, when filled with resonating microwaves, experiences a net thrust towards the wide end. It seems to violate of the law of conservation of momentum, implied by Newton, which says that no closed system can have a net thrust. However, Shawyer says net thrust occurs because the microwaves have a group velocity which is greater in one direction than the other and Einstein's relativity comes into play. Group velocity, the speed of a collection of electromagnetic waves, is a tricky business -- a pulse of light can even have a group velocity which is greater than the speed of light -- but can it really cause net thrust?

Shawyer built a demonstration thruster to test the theory in 2003. The thrust was tiny -- 16 mN, equal to the weight of a couple of peanuts [ that is still huge and completely measurable empirical proof – arclein ] -- but enough to validate the concept. However, sceptics [ any semi trained fool can attack anything and sound creditable to the ignorati in the press who are always scouting and promoting such naysayers - arclein ] were quick to attack. None of them actually inspected the apparatus, but Shawyer was assailed from all sides online and in the science press. Criticism was unsophisticated: Newton said it was impossible, therefore he must be a fraud. Even the most advanced theoretical critique, produced by John Costella, a PhD in relativistic electrodynamics, amounted to arguing about the direction of an arrow on one of Shawyer's diagrams.

Shawyer continued to produce and test more advanced demonstrators, working out elaborate ways of ensuring that the test results are valid and not the result of air currents, friction, ionization, interference or electromagnetic effects.

Such effects can easily ruin experiments where small forces are involved. The Nasa investigation into supposed antigravity eventually found that the apparatus was actually causing electronic interference within the measuring system and producing false readings rather than negating the Earth's pull.

Boeing's Phantom Works, which works on various classified projects and has been involved in space research, went as far as acquiring and testing the EmDrive, but say they are no longer working with Shawyer.

In 2007 the Russian Research Institute of Space Systems launched an experimental micro-satellite called Yubileiny (Jubilee) with a "non-traditional" engine which, according to Director Valery Mesnshikov, functions without ejecting reaction mass. However, it was later stated that "further developments" were needed and nothing further appears to be been published on Russian reactionless drives.

Meanwhile, the EmDrive was picked up by Yang at Xi'an, who has a background in space propulsion systems.

The Chinese team took a cautious approach. They started with a new analysis in terms of quantum theory in 2008 which indicated that the theoretical basis was sound and net thrust is possible. The next paper in 2010 quantified the amount of thrust that could be produced, and stated that the team was getting positive experimental results. The latest paper describes their latest thruster and gives the test results in details, showing that with a couple of kilowatts of power they can produce 720 mN (about 72 grams) of thrust.

It may not sound very much, less than three ounces, but in space a little thrust goes a long way. Boeing's advanced XIPS thruster, which fires out Xenon ions at high speed, generates less than a quarter as much thrust from twice as much power. It's used to maintain satellites in position, or move them to a slightly different orbit. Crucially, Xips weights about twenty kilos, more than an equivalent EmDrive, and the propellant for prolonged operation can weigh much more.

Propellant can account for as much as half the launch weight of a geostationary satellite. This means that, in principle, fitting one with an EmDrive rather than a conventional drive, could halve launch costs. Shawyer notes that EmDrives no more powerful than the Chinese one could keep the International Space Station in position without the need for costly refueling.

Meanwhile, Shawyer is moving on to bigger plans. The amount of thrust produced by an EmDrive is determined by the Q value of the cavity, which measures how well it resonates. A tuning fork has a high Q value in air; put it in treacle and it is damped and does not resonate so well. By using superconducting apparatus, Shawyer says that the Q value, and hence thrust, can be boosted by a factor of several thousand -- producing perhaps a tonne of thrust per kilowatt of power. Suddenly it's not about giving a satellite a slight nudge, it's about launching spacecraft.

Shawyer estimates that the prototype superconducting thruster could be ready in 2016. Even the most hardened sceptic would find it hard to ignore a thruster capable of levitating itself in the air. However, the EmDrive cannot violate the law of conservation of energy. It can exert force, but accelerating a vehicle over a distance still requires a huge amount of power, and ultimately it still needs a big power supply. Personal EmDrive jetpacks are unlikely, but Shawyer has plans for a deep space propulsion unit, an EmDrive-assisted spaceplane capable of taking off from an a runway and travelling to Australia in three hours -- and a personal air vehicle the size of a car.

However, aerospace companies are not in a hurry to do business with Shawyer, and he will not be able to build the superconducting thruster without funding.

Yang's experimental work is continuing; she says she is not able to discuss her work until more results are published this year. There is also the tantalising prospect of a demonstration at an aerospace conference. This might make the EmDrive hard to ignore and force a showdown with skeptics. So far the reaction in the west to Yang's work has been muted -- perhaps polite disbelief would be the best description. 2013 may change all that.