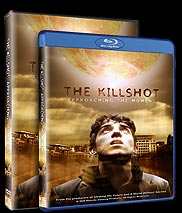 The problem with the kill shot as it is called is that it could well be a creditable threat. It is plausible that a massive solar flare a couple of orders of magnitude greater than ever encountered could cause serious damage. Yet we are close to transitioning our civilization into technological protocols that minimize the effect. By this I refer to the natural tying of modern tower living to agriculture. It would be simple to generate below ground refugia in a self sustaining tower with little impact on cost.

We are extremely vulnerable as long as our grid is used to distribute power. Yet we see that this is also likely to become reversed. Thus even an EMP pulse, as messy as it would be could be generally offset easily enough.

Beyond that remote viewing is out there and is been used to various ends. It naturally has been used to identify significant future events. The problem with that is that most such efforts in the past has consistently identified an end of everything situation. I suspect that this is mostly a reflection of the viewer's individual death outcome rather than a meaningful prediction.

In my own case as a market 'reader', I have understood the eminence of a major market break several times. It gave me weeks to prepare for the 1987 break and left me unsurprised on 9/11. I did not know what the event would be but understood it was eminent. All that is easy to assign to intuition picking up conforming movement. Of course, acting on that type of cue is often contradicted by those actions.

I have no intuitive sense that such a threat is anyways eminent. I do think that planning for the risk of an EMP pulse as part of forward planning is appropriate and timely for our civilization because structures we are building can easily offset the risk as we can largely offset earth quake risk. They will also be around for centuries.

It will also become possible to create refugia underground as our technology advances. That is several decades away.

On a far more timely matter, he does predict that North Korea will use a nuclear bomb. North Korea must be confronted and forced into regime change and nuclear disarmament. That has been intellectually evident for some time. This type of prediction makes it emotionally evident. It is also doable.


What is the Killshot?

During the top-secret Remote Viewing (RV) CIA and U.S. Army research program, trained viewers that were normally tasked with foreseeing the outcome of war related events began picking up on a future occurrence that appeared to mark a dramatic shift in global life. At first, these viewers, along with Major Ed Dames, the program's senior operations and training officer, had feared their subconscious was foreseeing nuclear war. It turns out after years of Remote Viewing sessions, the event is in fact a series of solar flares that are so devastating to the Earth, it may cause the death of billions and change life on Earth as we know it.

Normally, one might not take such a warning seriously, but what sets this prediction apart from others is that Remote Viewers have a track record of being amazingly accurate regarding globally recognized disasters and events. In fact, there are many predictions that were announced on national radio and TV programs that have already accurately come to pass with unprecedented accuracy including the tragic disaster in Japan, amysterious crop fungus, the predicted Indonesian 9.0 earthquake and more!
But knowing what's coming over the horizon is only first step. Learning how to prepare and protect yourself and loved ones comes next. For that reason, people have been learning Remote Viewing to locate their personal sanctuary locations, foresee smaller near term events, and become involved with optimal investments before time runs out.

Why is this free?!

You've probably heard that if something is so important, than why isn't it free? In this case, it is! Major Ed Dames, along with thousands of trained students worldwide, have learned and used this declassified skill to obtain subconscious data regarding any aspect of life including finding optimal investment, locating survival locations for catastrophic events and answering some of life's most mysterious questions. As a result, Major Ed Dames feels that this information is so important; Remote Viewers are using their own skill to generate the funding to produce and release of this shocking documentary without any intent of selling it for profit.


With times becoming more difficult with global financial turmoil and approaching natural disasters, food shortages and disease; it is more important than ever to learn and use Remote Viewing for protection. Begin by getting your FREE copy of Major Ed Dames' The killshot on DVD or Blu-ray and join the RV community!

What is Remote Viewing?

Don't be fooled by copycat techniques or so-called "instructors" that claim to teach alternate methods of Remote Viewing. In truth, there is only one true declassified Remote Viewing (RV) protocol which is a structured, teachable discipline that enlists the unconscious mind to gain direct knowledge about inaccessible targets, past, present or future. It took over 20 years of scientific research, real-world testing, and millions of dollars of tax funding to create the protocol and there are only a handful of people in the world that were involved with the official top-secret military program and are qualified to properly teach Remote Viewing which includes Major Ed Dames

During real-world operations, this newly discovered skill quickly produced high levels of accuracy far greater than the program originally expected; therefore, was utilized for real-life military operations. Though commonly defined as a “psychic” or “Psi” ability by many individuals; Remote Viewing is rather, a scientifically developed skill that is able to consistently obtain accuracy rates of 80% on data during an RV session by learning to access your unconscious mind without analytical thinking. This is the first skill that truly unlocks the unconscious mind to consistently obtain accurate, reliable information about anything one would like to know.

I really liked the links to past examples, and the current events predicted. Oh wait. THERE WERE NONE!!! MAYBE THIS is just crap Ya think?

there are multiple reports on remote viewing but it is still a long way from mainstream. these reports do alert us to threats. It does not make them other than fussy.

Yet the behavior of the sun over the past three years has been somewhat non conforming and opens the door to alertness anyway. Perhaps we are due to be whacked with an emp pulse.