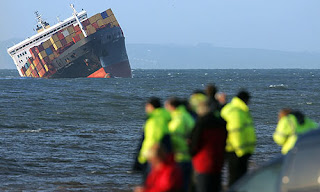 This item makes the much more telling argument that we are dealing with structural failure most of the time or realistically all the time. Solving that type of failure is naturally difficult since we have long remained unsatisfied. I have been saying as much on specific cases for years. In fact much of our civilization is gamed disadvantageously and tradition has kept it all in place.

I see our core problem as our dependence on a command and control model and no obvious replacement put in place. I have thought through an alternate that I call the rule of twelve, but it may well be even harder.

The take home is that our expectations fall apart in the face of our human choices. There is never enough good human choices because we fail to test properly. The military obviates a lot of this difficulty through the media of increasing responsibility and reviews however unsatisfactory. It actually works pretty well.

An obvious solution of course is to simply build in a pass over and out attrition system into all organizations. This type of mobility is actually welcome.

Neither Evil Nor Incompetent

Classical liberals spend a great deal of time pointing out the failures of government. When we enter into public discourse over politics, we are often challenged to explain the nature and frequency of those failings. There are three kinds of explanations we might offer, but only one really explains not only why governments fail in specific cases, but also why government in general is likely to fail at pretty much everything.

One type of explanation classical liberals might offer, and that some among us do with distressing frequency, is to argue that politicians and bureaucrats have evil designs to undermine the economy or the social order to forward their own careers or other goals. No doubt, political history gives us plenty of reason to think that, in Hayek’s words, the “worst rise to the top” in the political world.

However, the weakness of this approach is that there’s a convenient response available to the defenders of government: Okay, then we just have to elect or appoint better, more morally upright people to political office. The “evil people” theory does not actually explain the failures of government at a fundamental level. Rather it suggests that with a better captain, the “ship of state” might be steered clear of the icebergs and actually reach its destination. The classical-liberal response to this counterargument must somehow maintain that it’s endemic in politics that “bad” people rise to the top. If that’s the case, then we need to get beyond the “evil people” argument and go straight to whatever causes that endemic problem.

The other problem with the “evil people” argument, and I will explore this point in more depth next week, is that it concedes that people can manipulate the economy for their ends. It’s not clear this is a concession that classical liberals want to make.

Rather than invoking malevolence, we could instead invoke incompetence. The
“worst” who get on top simply refers to those with the least ability. Invoking incompetence has the advantage of avoiding the implication that people can manipulate the economy. However, that argument is open to a similar response: So elect/appoint more competent people. If Michael Brown, head of FEMA during Hurricane Katrina, simply was incompetent, then there’s nothing fundamentally wrong with FEMA that someone better trained in disaster response couldn’t fix, right?

Here, too, if there’s some reason to expect that government will attract incompetents, or at least have no way to weed them out, then we need to get to those arguments, rather than getting hung up on incompetence in itself.

The third alternative is superior to both the “evil” and “incompetence” arguments: focusing on what makes government agencies structurally unable to accomplish the tasks assigned them. For example, the failures of the Federal Reserve are not the result of the Fed’s being run by a cabal of global bankers intending to undermine the U.S. economy; nor are the failures the fault of the incompetence of the Board of Governors or Federal Open Market Committee. Even with the kindest, most public-spirited, and most brilliant economists at the helm, the task facing the Fed is simply impossible. No one can control the money supply and manipulate the macroeconomy the way the Fed is expected to. It cannot obtain the knowledge it needs to undertake that task, unlike firms in the market, which can rely on the prices to inform their decisions.

If we classical liberals assume that those in office are the best and the brightest yet still have a solid explanation for why they cannot get the job done, the case for freedom is much stronger and less alienating than if we focus on the morality or competence of government employees. Never assume evil or incompetence. Explanations of systemic, structural failure are available and more effective.

http://www.fee.org/the_freeman/detail/neither-evil-nor-incompetent#ixzz2O7aSljro
Posted by arclein at 12:00 AM