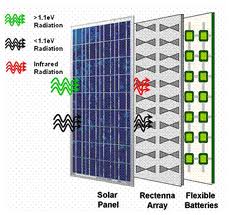 This is clearly getting closer to fruition. The theory has been with us for a long time. Now we may start seeing physical reality. Consuming 70% of the incoming infrared energy would be welcome indeed and dominate certain energy sectors.

I particularly like its chances as technology of choice to drive my Eden machine conceptualization. Vertical panels would dump wasted sunlight directly into the affected trees. It should be possible to optimize sun and shade management in such a system.

In the event sooner or later, this will turn up in the solar industry space and allow retrofitting of every panel out there for a doubling or even tripling of throughput.


Solar Power Today made the following announcement on February 6, 2013:

If it’s up to Brian Willis, we will soon quite literally be tuning in to the sun. The University of Connecticut professor has patented a technique to manufacture nanosized antenna arrays that have the capability to efficiently convert sunlight into usable electric power.

In theory, these very small antenna arrays can harvest over 70 percent of the sun’s electromagnetic radiation and convert it into electric power. These are called “rectennas” due to their ability to absorb the alternating current induced by sunlight and directly rectify it to direct current. In contrast to existing solar silicon solar panels which mainly work within a specified band gap, rectennas can be tuned to harvest sunlight in the whole solar spectrum which makes it very efficient.

Brian Willis, a University of Connecticut engineering professor, was able to discover a way to manufacture a working rectenna device. The process is called selective area atomic layer deposition (ALD) and it can precisely coat the tip of the device with layers of individual copper atoms to achieve a gap of about 1.5 nanometers, a critical size because this creates an ultra-fast tunnel that enables the maximum transfer of electricity.
ALD can be successfully used to create this very tiny gap, whereas existing lithographic fabrication methods have been unable to create this distance between the two interior electrodes. To put this in perspective, this extremely small distance is 30,000 times smaller than the human hair’s diameter. The appeal of ALD is its simplicity, reproducibility, and scalability for mass production. ALD can also be used in other areas including thermoelectrics, infrared sensing, and chemical sensors. It is hoped that this technology can one day help solar energy achieve cost-parity with fossil fuels.

Willis is collaborating with scientists from Penn State Altoona to build a prototype rectenna and test the efficiency in an effort to further fine tune the technology.