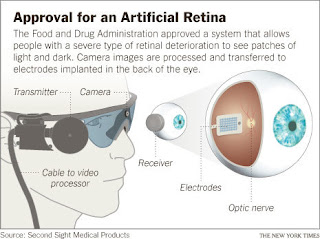 Here it is. The first direct augmentation of the optic nerve to generate images with a practical device. It is even good enough to be helpful. We will now experience continuous improvement until, we develop the larger device with a broader spectrum used by ET.

In the meantime, this is good enough to eliminate the need for a cane or a seeing eye dog.

As stated it can only get better and denser in terms of data flow.


The Food and Drug Administration on Thursday approved the first treatment to give limited vision to people who are blind, involving a technology called the artificial retina.

The device allows people with a certain type of blindness to detect crosswalks on the street, the presence of people or cars, and sometimes even large numbers or letters. The approval of the system marks a milestone in a new frontier in vision research, a field in which scientists are making strides with gene therapy, optogenetics, stem cells and other strategies.

“This is just the beginning,” said Grace Shen, a director of the retinal diseases program at theNational Eye Institute, which helped finance the artificial retina research and is supporting many other blindness therapy projects. “We have a lot of exciting things sitting in the wings.”

The artificial retina is a sheet of electrodes implanted in the eye. The patient is also given glasses with an attached camera and a portable video processor. This system, called Argus II, allows visual signals to bypass the damaged portion of the retina and be transmitted to the brain.

With the artificial retina or retinal prosthesis, a blind person cannot see in the conventional sense, but can identify outlines and boundaries of objects, especially when there is contrast between light and dark — fireworks against a night sky or black socks mixed with white ones.

“Without the system, I wouldn’t be able to see anything at all, and if you were in front of me and you moved left and right, I’m not going to realize any of this,” said Elias Konstantopolous, 74, a retired electrician in Baltimore, one of about 50 Americans and Europeans who have been using the device in clinical trials. He said it helps him differentiate curbs from roads, and detect contours of objects and people. “When you have nothing, this is something. It’s a lot.”

The F.D.A. approved Argus II, made by Second Sight Medical Products, to treat people with severe retinitis pigmentosa, in which photoreceptor cells, which take in light, deteriorate.

The eyeglass camera captures images, which the video processor translates into pixelized patterns of light and dark, and transmits them to the electrodes. The electrodes then send them to the brain.

“The questions that this particular device raised for F.D.A. were very new,” said Dr. Malvina Eydelman, the F.D.A.’s director for the Division of Ophthalmic and Ear, Nose, and Throat Devices. “It’s a big step forward for the whole ophthalmology field.”

About 100,000 Americans have retinitis pigmentosa, but initially between 10,000 and 15,000 will likely qualify for the Argus II, according to the company. To be eligible, people must be over 25, have previously had useful vision, and be so visually impaired that the device would be an improvement.

But experts said the technology holds promise for others who are blind, especially those with advanced age-related macular degeneration, the major cause of vision loss in older people, affecting about two million Americans. About 50,000 would be impaired enough for the device to help, said Dr. Robert Greenberg, Second Sight’s chief executive.

In Europe, Argus II received approval in 2011 to treat severe blindness from any type of outer retinal degeneration, although so far it is marketed there for retinitis pigmentosa. In the United States, additional trials are necessary for such approval.

Eventually, the company plans to implant electrodes directly into the brain’s cortex to “allow us to address blindness from all causes,” Dr. Greenberg said.

Initially, Argus II will be available at seven hospitals in New York, California, Texas, Maryland and Pennsylvania. It will cost about $150,000, excluding surgery and training. Second Sight said it was optimistic that insurance would cover it.

Argus II was developed over 20 years by Dr. Mark S. Humayun, an ophthalmologist and biomedical engineer at the University of Southern California. Some financing came from private sources and the National Eye Institute, the National Science Foundation and the Department of Energy, all federal agencies.

Dr. Humayun said he envisioned applying the technology to other conditions than blindness, implanting electrodes in other parts of the body to address bladder control problems, perhaps, or spinal paralysis. “We don’t think of the human body as an electrical grid, but it runs off electrical impulses,” he said.

The Argus II was approved under a special F.D.A. program designating it a “humanitarian use device,” which Dr. Eydelman said applied to therapies that would be used for fewer than 4,000 people a year. Argus II is only the 57th humanitarian device exemption granted by the agency. Companies applying for humanitarian device approval can conduct much smaller clinical trials — Second Sight submitted data on only 30 patients — and must only demonstrate safety and “probable benefit,” not proof of effectiveness, Dr. Eydelman said.

The F.D.A. worked with Second Sight to develop ways to measure that benefit, including tasks like walking on a sidewalk without stepping off, and matching black, gray and white socks.

Of the 30 Argus II clinical trial patients, 11 experienced a total of 23 negative effects, the F.D.A. said, including retinal detachment and erosion of the clear covering of the eyeball.

Some patients see more improvement than others, for reasons the company has not been able to determine. Kathy Blake of Fountain Valley, Calif., said she has had success with a Second Sight exercise to see if patients can identify large numbers or letters on a computer screen.

Dean Lloyd, a lawyer in Palo Alto, Calif., said he initially wondered, “Is it really worth all the time and expense? I, at first, did not think so.” Early on, only nine of the 60 electrodes were working, but over time his implant was adjusted so more electrodes responded, and now 52 of them work. He can see flashes of color, something not every patient can, and he wears the glasses and video processor constantly.

“If I don’t wear it, it’s like I don’t have my pants on,” he said. “I’ve even fallen asleep with the blooming thing.”

Stephen Rose, the chief research officer for the Foundation Fighting Blindness, which supported Dr. Humayun’s very early work but has not financed it since, said the artificial retina would eventually be only one of the options to help blind people.

“I think there are tremendous possibilities,” he said. “I’m not downplaying the retinal prosthesis, don’t get me wrong. It’s huge for some individuals, and it’s here now.”

Barbara Campbell, 59, relishes how the device helps her navigate Manhattan streets, locate her bus stop, and spot her apartment building’s foyer light while riding in a taxi.

Most exciting, though, is how it enhances her experience of museums, theater and concerts.

At a performance by Rod Stewart, “I could definitely see his hair,” which was white-blond under the lights, she said. At a concert by Diana Ross, even though Ms. Campbell sat far away from the stage, she said Ms. Ross “was wearing a sparkly outfit, and I could see her.”

No such luck at a performance by James Taylor, though. His low-key clothing created no contrast for the artificial retina to register. Alas, Ms. Campbell said, “He wasn’t so sparkly.”